Flaming June has hit Cape May with a vengeance right now as temperatures sour into the 90s and everything ducks for cover. Good tern watching continues at South Cape May Beach and fluffy Piping Plover chicks can now be seen on the Plover Ponds. First signs of return migration are already under way with one or two reports of Whimbrels coming through now. At a little before 8:00AM this morning, Sam Galick reported a White-winged Dove which did a quick fly-by at the parking lot at Corson's Inlet. A White-breasted Nuthatch at the corner of Bayshore and New England was something of a surprise this morning.

Time for a quick review of the batches of photos that I have been sent recently. 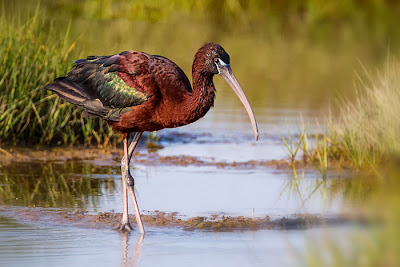 A trip around the back bays can produce great birding pretty much any time of year, and is certainly well worth while mid-summer while migration takes a back seat for a short while. An adult Glossy Ibis offers a perfect photo opportunity at the Wetlands Institute at Stone Harbor [photo by Jane Ellison]. 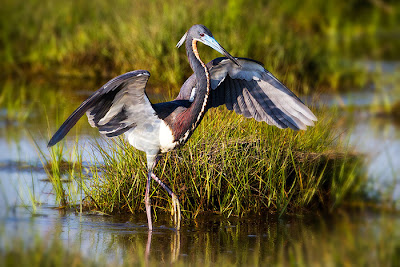 Tricolored Herons are never common here, but they can be seen in small numbers without too much difficulty. This bird was photographed recently at the Wetlands Institute, Stone Harbor [photo by Jane Ellison]. 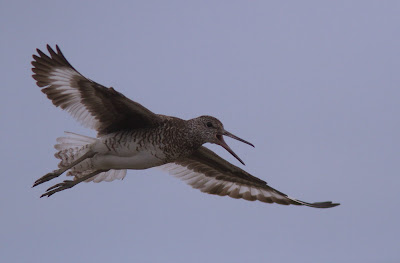 In contrast to Tricolored Herons, the back bays are brimmed full of Eastern Willets, a bird that never misses an opportunity to announce its presence, especially during the breeding season [photo by Tony Leukering]. 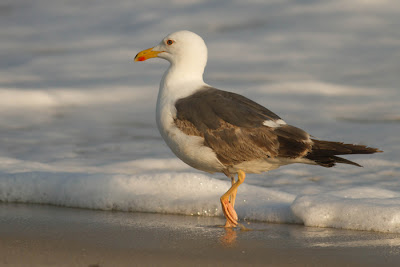 If you leave the back bays and head to the South Cape May Beach, keep an eye out for gulls along the tideline. In contrast to other gull species, that mostly loaf higher up the beach and go off to feed elsewhere, Lesser Black-backed Gulls regularly feed along the tideline and this can be a good way to locate them. This second-calendar-year Lesser Black-back is currently hanging out on the South Cape May Beach [photo by Tom Reed]. 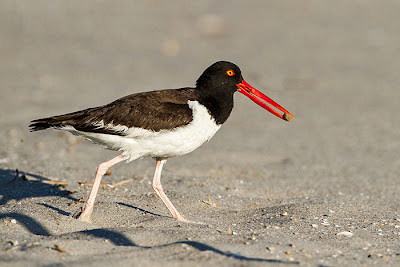 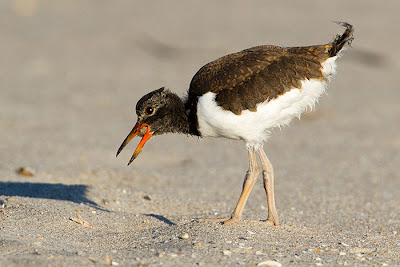 ...and feeding them to their growing youngsters [photos by Jane Ellison]. 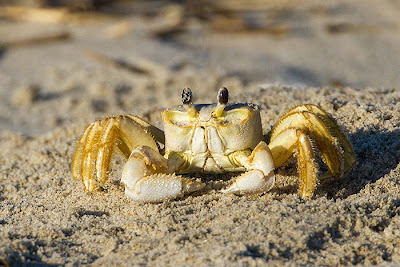 Many people don't realize that Ghost Crabs can be a big threat to young beach birds. Ghost Crabs feed mostly at night when birds are roosting and will readily take small birds or eggs if they get the chance [photo by Jane Ellison]. 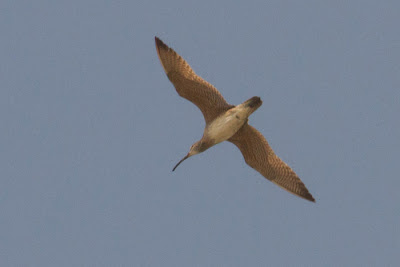 The first sign of autumn migration - a calling Whimbrel over Cape May Point on the longest day of the year [photo by Tom Reed]. 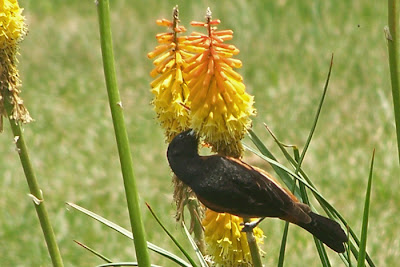 It is interesting how native bird species adapt to feeding from introduced plants. This male Orchard Oriole is feeding on nectar from the flower spikes of Red-hot Pokers (Kniphofia spp.) and will help to pollinate the flowers in the process. Red-hot Pokers are native to Southern Africa but are popular garden plants in many countries; in Europe, bird species as diverse as Blue Tits and Great Spotted Woodpeckers regularly nectar-feed from these flowers [photo by Debbie Hudson]. 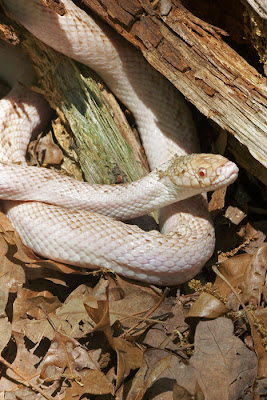 Once in a while you chance across something really unusual out in the wild - recently, Debbie Hudson came across this albino snake at Cox Hall Creek WMA. Identifying albino snakes can be tricky as there is always the possibility of it being an escaped pet and thus a non-native species. However, this species looks as though it is most likely a local Rat Snake [photo by Debbie Hudson].