Those heady days of summer are creeping up on us and, with temperatures edging ever higher, it's not surprising that we had our first big thunderstorm of the season last night. Down here at the point we actually escaped the bad weather, but I hear that there were some pretty heavy hail showers on parts of the barrier islands. I was out on the barrier islands myself this morning and several times I was reminded of how much this area has to offer, yet how seldom we birders check it out. Of course, if you are in any sort of a hurry to get anywhere, the barrier islands can be very testing in high summer, but right now it's not too bad out there. As a wildlife enthusiast I can get depressed quite quickly as I pass through endless rows of faceless houses with sterile, over-manicured gardens full of non-native species and acres of bare gravel; and yet every so often, you come across a little oasis in the desert. From Ocean City, through Strathmere, Sea Isle City, Avalon and Stone Harbor to Wildwood, you will find little places where people are trying to make a difference. Ocean City, Avalon and Stone Harbor all have small but beneficial bird sanctuaries which, while maybe not attracting the numbers of birds you might find at Cape May Point or Belleplain State Forest, certainly earn their keep by providing food and shelter for breeding, wintering and migratory birds in season and all are worth a check at the right time of year. At a number of locations today I chanced across both Black-crowned and Yellow-crowned Night Herons lounging in good breeding habitat and clearly they do well while rubbing shoulders with us Humans. Glossy Ibises too were at several places and the calls of Willets seemed almost always to greet me wherever I overlooked the back bay marshes. Other pleasant surprises included an active breeding colony of Purple Martins on the edge of the saltmarsh, at least four Willow Flycatchers calling at scrubby wetlands in Ocean City and Strathmere and the first real northward push of Spot-winged Gliders that I have noticed this year, with a nice wave of these dragonflies clearly moving through. While I was off the point today, Tom Reed reported a Roseate Tern on the South Cape May beach and Karl Lukens later reported it from the wooden railing on Bunker Pond. The first of the year I think, so keep an eye out for terns with black bills!

Finally, I would like to give a heart-felt thank you to all the people of the barrier islands that I saw today keeping an eye out for Diamondback Terrapins. Female terrapins heavy with eggs were running the gauntlet of the traffic throughout the islands today but I was impressed by how few I saw that had been run over and how many times I saw someone take evasive action, or even stop and help them across the road. Thanks folks, your terrapins need you! 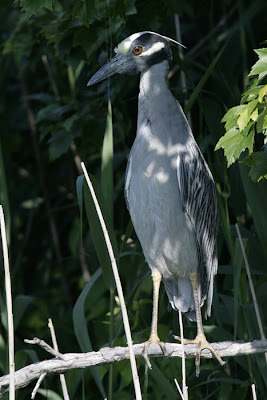