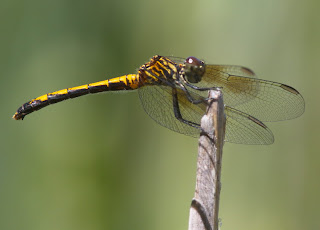 The true summer dragonflies and damselflies are now becoming a common part of the fauna viewable at area lakes, ponds, ditches, and streams. And at many places well removed from such water bodies. Seaside Dragonlets (above) are now showing up virtually everywhere in Cape May County and the rest of south Jersey. Despite the species' name, it really can occur anywhere down here. This very small, wide-ranging, black or black-and-yellow, southern species even has populations 100s of miles from the nearest ocean, including in New Mexico! Other real summer species now out include a variety of skimmers (Needham's [below], Great Blue, Slaty, and Bar-winged), Calico and Halloween pennants, and what may be the most numerous dragonfly in Cape May County, Blue Dasher. 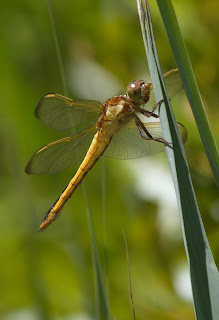 When the odonates (dragonflies and damselflies) of Cape May County were first surveyed back in the late 1980s and early 1990s), Double-striped Bluet -- a tiny species of damselfly (below) -- was unknown here. Will Kerling, Mike Crewe, and I found the first records for the county a few years ago (near Indian Trail Road) and Mike and I have been finding them in ever more places this year, including at Fort Apache Park and Cox Hall Creek WMA. While the species has not yet been found on Cape Island, I do not doubt that it will be soon. 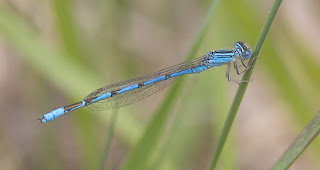 As with all things great and small, things die and others take advantage of the bounty their deaths provide. I recently found a male Calico Pennant that was providing sustenance to a large number of water striders (genus Gerris) in a tiny puddle of water. The water striders, who may lose their pondlet to drying conditions, have the ability to fly and find other water. 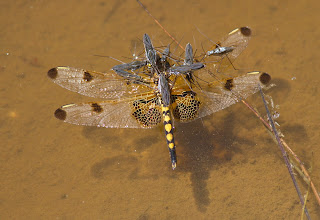 Posted by Tony Leukering at 4:28 PM