Shortly after posting my last blog piece on terns, I received a text message, alerting me to a Roseate Tern on the wooden railing that sticks out into Bunker Pond. Having just done the post, I already knew that I was short on Roseate Tern photos so quickly shot out to address this! By the time I got there, the bird had already flown, but this just pushed me to work a little harder for my bird...

Deciding to check the beach, I soon found a Roseate Tern among a group of 20 or so Common Terns - the latter a species that doesn't use the railing at Bunker Pond anywhere near as much as do Forster's Terns. The terns were too far for photographs, perched as they were inside the roped off breeding beach, and I decided to move away quickly as the Black Skimmers clearly didn't want me there! The sight of the male skimmer feigning injury to draw me away and then avidly strafing the top of my head was plenty enough for me to work out that they are quite definitely breeding this year! What was unusual to me about the Roseate Tern was that it was not banded - much research effort has gone into banding Roseate Terns to allow much closer study and a better understanding of this species, which remains very scarce throughout much of its range and vulnerable to pollution incidents and disturbance during the breeding season. Walking straight back into the state park, I was very surprised to then find not one but two Roseate Terns on the Bunker Pond railing - and both were banded! So here's where you can help out; with a close enough view, good optics and a fair dollop of patience, you can have a go at reading the band numbers on the legs of these two terns. Here's some pictures to point you in the right direction and get you started - let's see if we can get all the numbers between us! 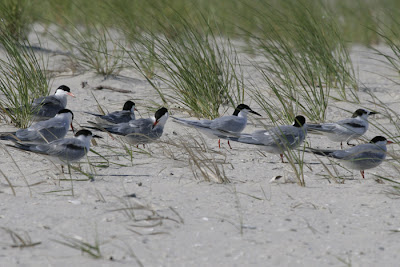 At a distance, a Roseate Tern strikes you as a rather pale bird overall, with a long, dark bill. This adult Roseate Tern (center) is among a gathering of adult (red bills) and second-calendar-year (black bills) Common Terns on the South Cape May Beach. Though the young Common Terns have black bills, note that they also have white foreheads and black carpal bars (the dark line on the wing) [photo by Mike Crewe]. 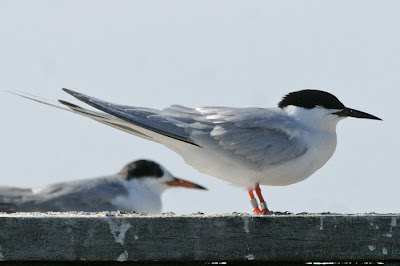 Coming in much closer, the Roseate's features are even more apparent. Note the long, finely-pointed bill, the relatively pale upperparts and the very long tail streamers. The white upper edge to the folded wing that I mentioned in the last post is hard to see here because of the pale sky behind, but it is present and this feature should always be looked for [photo by Mike Crewe]. 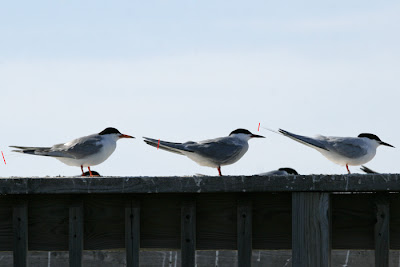 If you have a real stroke of luck, you can get the birds to line up for you on the Bunker Pond railing! Here, left to right, are Forster's Tern, Common Tern and Roseate Tern. Look carefully at the relative proportions of bills, the upperpart and underpart color and - especially - the length of the outer tail streamers relative to the wing tips on each bird. Here, I have drawn a short red line to indicate where the tips of the tail streamers fall for each bird. The Forster's Tern is intermediate, the Common Tern very short (falling well short of the wing tip) and the Roseate Tern by far the longest (click on the photo for a slightly bigger picture) [photo by Mike Crewe]. 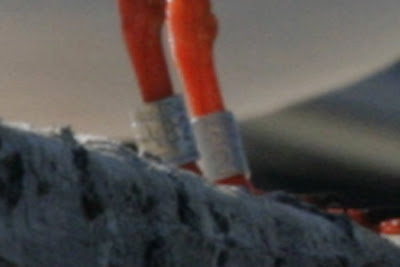 Here's how you can really help - zooming right in on the Roseate Tern photos, it is actually possible to read some of the digits on the bands. On this bird, it is possible to see 482 on the right (closest) leg and a 2 on the left leg with a smaller 6 above it. So we have a start - if we can get the whole number, researchers can learn about the movements of this bird - and so can we! [Photo by Mike Crewe] 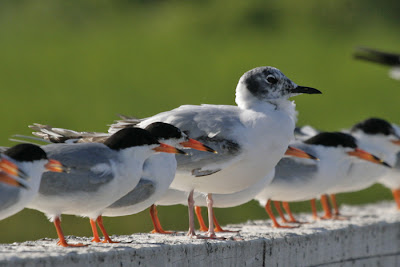 And don't forget to keep an eye out for other birds in the area too. I was very surprised to see this second-calendar-year Bonaparte's Gull turn up on June 16th at Bunker Pond - a winter visitor in mid-June! [Photo by Mike Crewe]

If you are keen to learn more about tern identification, why not consider joining our special one-day tern workshop which take places on Saturday, August 4th. Contact our program registrar for more details on 609-861-0700.