Maine Herring Gull in Cape May 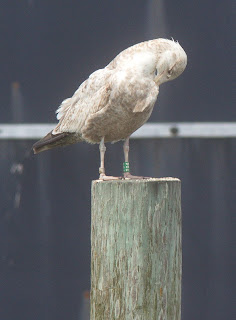 I was fortunate to join Mark Garland and his Elderhostel group on 17 May on one of those spectacular boat trips through the Cape May back bays aboard the Osprey. At the entrance to Jarvis Sound (at the toll bridge on Ocean Drive), I noted four Herring Gulls perched on individual pilings and noted that one of them was not only banded, but color-banded! As we passed fairly close to that bird, I snapped off a few pictures in hopes of being able to read the alphanumeric code on the color band on its left leg. Success!

I sent off the details and a picture (such as the one above) to the Bird Banding Laboratory (part of the U. S. Geological Survey) based in Patuxent, MD. I just heard back from that submission and wanted to share the details. The bird was banded on 15 July 2010 as a nestling/fledgling before it could fly, and was banded on Appledore Island, ME, by a crew under the direction of Dr. Sara Morris at Canisius College in Buffalo, NY.

I was particularly happy with this bird, as my estimation of its age at the time was that it was nearly two years old, as discerned by the plumage (it had some gray in the mantle) and soft-parts coloration (the bill was 3/4 pinkish). Additionally, it's outer primaries did not have the very-pointed tips typical of such birds in their first year of life. However, these large gulls are individually variable in the amount of time that they take to achieve adult plumage. In Europe, where a lot of gull study is conducted (unlike on this side of the Pond), researchers have found that a sizable minority of subadult Herring Gulls (and other large gull species) sport plumage that does not necessarily match the known age of particular individually color-banded birds. This bird, though, was spot on!

One of the take-home messages in this event is that anyone can contribute to the advancement of our knowledge of birds, it just takes a little bit of focus. So, the next time that you pass by a bunch of loafing gulls, take a bit of time to see if any are banded. Perhaps, you can provide the next piece of data that enables us to understand more fully the ecologies and strategies of even a common species such as Herring Gull.
Posted by Tony Leukering at 1:14 PM