White-winged Dove and other news

Yesterday, Sam Galick and Vince Elia were out on a saltmarsh breeding bird survey and reported a White-winged Dove which flew across the parking lot at Corson's Inlet State Park. There's been one or two fly-through reports of this species already this year so it is certainly worth giving any dove you see a second look. Bob Lubberman from The Osprey reported a Gull-billed Tern nesting among other Terns on the back bays behind Wildwood, while Black Skimmers steadily increase at Cape May Point, which may be associated with disruption at the main breeding colony at Malibu Beach where a cat has apparently been seen recently.

Further afield at Forsyth NWR, Brigantine, single Snow Goose and Brant were seen on the most recent wildfowl count there and reports continue to come in on a singing male Dickcissel near mile marker 9 on the driving loop. A White-faced Ibis appears to be summering at the refuge too.

One bird that slipped my net was a Cliff Swallow, reported by Sam Galick at Cape May Point State Park on June 16th - another one of those weird June things! 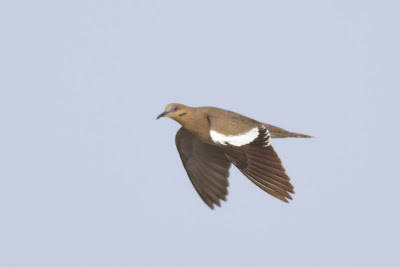 This White-winged Dove flew through Corson's Inlet out on the barrier islands on June 22nd - keep your eyes peeled for that distinctive white wing stripe [photo by Sam Galick]. 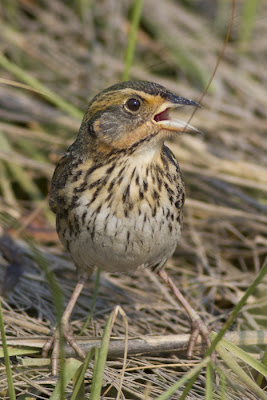 Annual surveys carried out by New Jersey Audubon staff are proving to be the best way to get an idea of population levels of saltmarsh breeding birds. Many of these species are very elusive simply because they live in a world that is very difficult for us to access because of all the water and thick mud, and because the very dense vegetation makes viewing the birds very difficult (not to mention the bugs!). Early morning surveys to record singing birds give us a much better feel for breeding of numbers of species such as Saltmarsh (above) and Seaside Sparrows, and Clapper Rails [photo by Sam Galick].