I'm not trying to rush along time, but we are just a few days away from the longest day and the inevitable slide into the back end of the year!! Time really does fly and, while heading toward Fall is an exciting prospect at Cape May, we have the summer birding doldrums to get through first. Lately, our attention down here at the point has been turning to terns (hence the dreadful title to this post, sorry!) and, typically for this time of year, we have been enjoying a nice array of tern species here of late. Perhaps most unusual has been the observations of both a pair of Caspian Terns and a pair of Royal Terns going through the early motions of breeding behavior. These are not species that we see breeding at the point so it is interesting to ponder what is going on. My guess is either that they are individuals breeding for the first time and so do not have established territories elsewhere yet, or they are birds that perhaps had their nests washed out by the high spring tides we have been having again this year and are doing a little bit of aimless wandering. Black Skimmers are again showing breeding behavior on the South Cape May Beach and this would certainly be a great species to be able to add to the current tally of Piping Plover, Least Tern and American Oystercatcher at the site.

Here's a few photos to get you in the mood for some summer beach birding at Cape May: 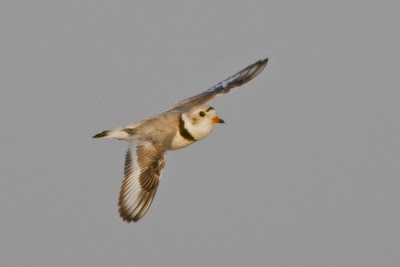 Though often rather distant in their roped-off breeding zones, Piping Plovers at the point regularly fly from the beach to the Plover Ponds along the south edge of the state park to feed and offer opportunities for great flight shots like this one [photo by Sam Galick]. 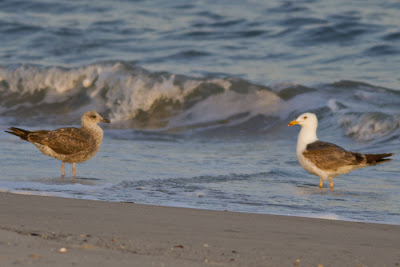 Lesser Black-backed Gulls continue to increase in both number and occurrence at Cape May and can be seen - with a bit of luck - pretty much every month of the year now, with peaks during migration periods. Note how the second-calendar-year bird on the left lacks the contrasting white head of an American Herring Gull, while the third-calendar-year bird on the right already wears enough dark feathers on the back to define it readily from herring gulls too [photo by Sam Galick]. 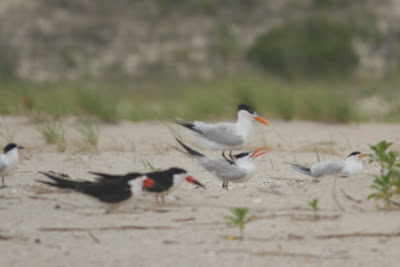 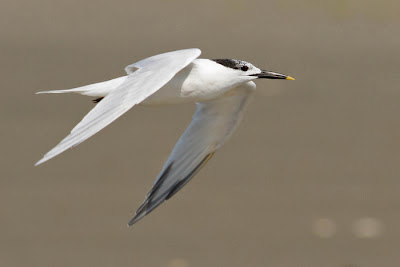 Sandwich Terns don't breed as far north as New Jersey on the eastern seaboard of the US, but one or two turn up at Cape May each summer. This one stills sports a lot of white on its forehead and is perhaps a bird that is in its first full summer and not yet breeding [photo by Tom Reed]. 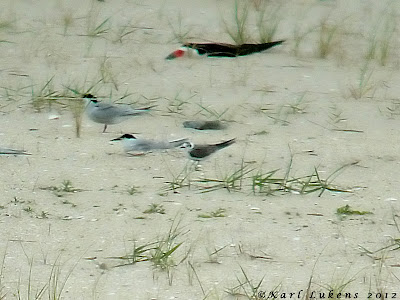 Heat haze and distance can be a real problem when trying to photograph birds on the South Cape May Beach, but Karl Lukens did a good job capturing an image of this second-calendar-year Black Tern that has been showing well around The Rips and Bunker Pond lately. 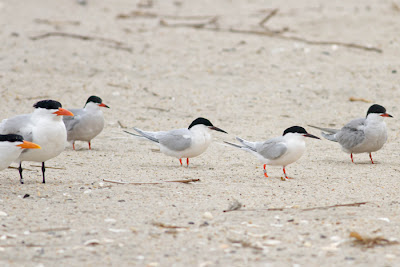 Two adult Roseate Terns (center) with Common and Royal Terns on South Cape May Beach this week. Roseate Terns are a species of conservation concern and most populations are closely monitored - hence most birds you will see will be sporting leg bands like these two. Roseate Terns always stand out as very white birds with long, finely-pointed bills. In breeding plumage (as here) they also sport vivid orange-red legs and often a pinkish flush to the breast [photo by Tom Reed]. 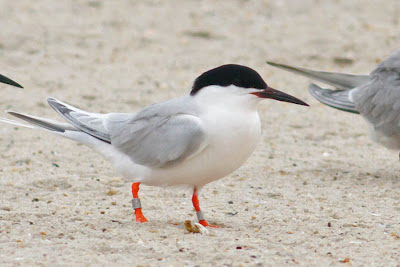 I couldn't resist cropping and zooming in on Tom Reed's photo to highlight an excellent identification mark of Roseate Tern - yet one that is rarely highlighted in the current crop of field guides on the book shelves. Look at the folded wing of this Roseate Tern and you will see a noticeable white line running along the top edge, formed by white inner webs to the primaries. This is a great feature to use to pick a Roseate out if you have a mob of terns all roosting together - maybe we will get one on our Tern Workshop on August 4th (contact us for details!). 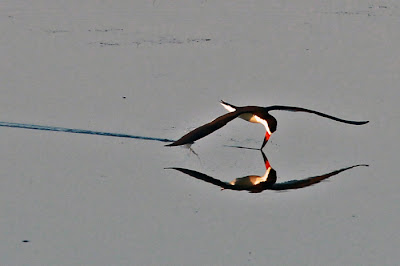 Like an airplane leaving a condensation trail across the sky, the bill of this Black Skimmer cuts a fine line through the waters of the Plover Ponds. Watching skimmers on their evening sorties as the sun sets behind the lighthouse is surely the highlight of any summer visit to Cape May [photo by E J Nistico].

As birds take a gentle back seat for a short while, don't forget there is still so much more to enjoy at Cape May! We continue our Wednesday state park walks (with Brown Pelican, Wilson's Storm-petrel and Black and Roseate Terns all highlights this week), Pete Dunne's Monday mornings at the Meadows continue through Summer, as do boat and kayak trips and our broader wildlife walks that look at plants, dragonflies, butterflies and a whole manner of other things! Check out our online event calendar by clicking here, or stop by and pick up the latest Kestrel Express for full details. See you in the field!
Posted by Mike Crewe at 1:08 PM