A recurring theme in blog posts this year has been the presence through the summer period of a number of bird species - most notably ducks - that we typically think of as winter visitors. As mentioned before, it seems most likely that these are birds that found weather conditions not conducive to migration at the time in spring when they would normally be heading back north and they just decided to stay further south. This idea is supported to a certain degree by the fact that pretty much all of the over-summering birds are clearly identifiable by their plumage as being second-calendar year birds and thus individuals that would not normally breed this year anyway. There's no pressing need for them to push all the way north to Arctic breeding grounds so typically they might head north some of the way and perhaps summer off the New England coast or the Maritimes, but this year, Cape May will do nicely!

Time constraints (as well as aborted attempts due to the lack of a refuge from tourists for the birds around Cape May) have prevented me from getting photos to build a blog post around these ducks until now; a blustery summer rainstorm gave the birds brief respite and rest on the beach for a short while until Sunset Boulevard was log-jammed with cars and the birds breathed a heavy sigh and headed for the water again. However, the opportunity was taken and I spent a short time studying a party of Black Scoters at a time of year when these birds are not normally that easy to study.

One thing that immediately strikes you about ducks in summer is how scruffy and unkempt they look. Something else also strikes you quite quickly - they appear to have no wings!! This latter point is explained by the fact that most ducks, geese and swans molt all of their flight feathers (and often tail feathers) in one go, a strategy that renders them flightless for a few weeks. For most birds this would be suicide; most birds use flight as a quick get-away from potential danger, so they molt their flight feathers in sequence, usually starting in the middle of the wing and molting one or two at a time toward the two ends. This allows them to retain the power of flight throughout. Waterfowl, however, gain protection from most potential predators by simply staying out on the water, so can afford to dump a whole bunch of feathers in one go and get the whole messy business of molting out of the way as quickly as possible.

The easiest time to go through this annual, complete molt of feathers is in late summer, toward the end of the breeding season and many species go through short molt migrations, when the bulk of a population of a species heads to a traditional molt location, giving the birds the added protection of 'safety in numbers'. A classic example of this takes place in Europe, when almost all of the Common Shelducks in the UK migrate to the north German coast for a couple of months to molt, then migrate back again. Since most waterfowl breed a long way north of where most of us live, we seldom get to see these molting birds, so their appearance at this time of year is unfamiliar to us. Here are some recent photos of some surprising ducks... 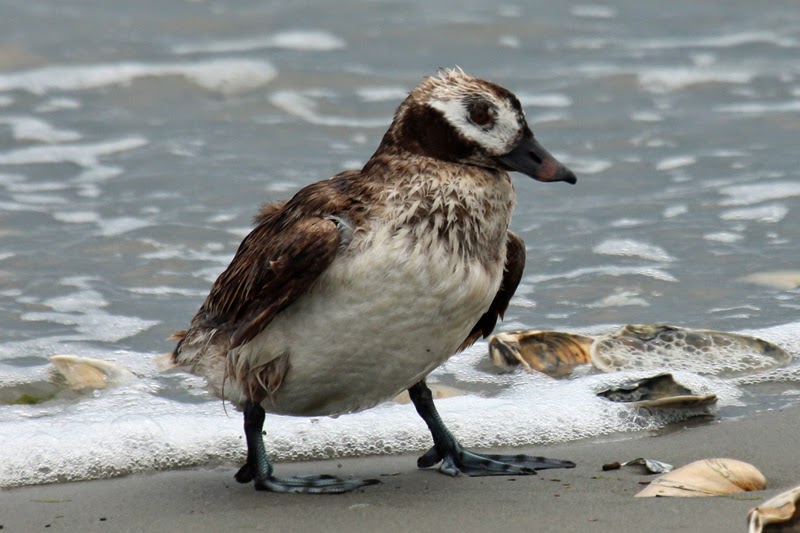 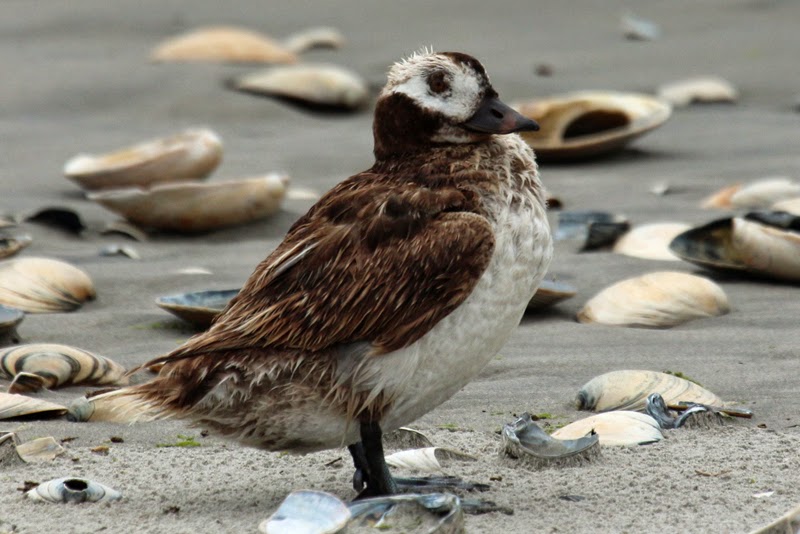 These two pictures were the main inspiration for this post... I received these photos recently as an identification request - and it is quite easy to see why! This spiky rag-tag bundle of feathers is a first-summer male Long-tailed Duck, a species few people see in July without making a huge effort to head north to the tundra. Though the eponymous tail and the flight feathers are missing, this bird can be identified to species by the head pattern and the dark bill with pale pinkish patch. This individual has been hanging out this summer at Longport Boulevard, Atlantic County and certainly makes for a great mystery photo candidate... [photos by Kelly Hunt] 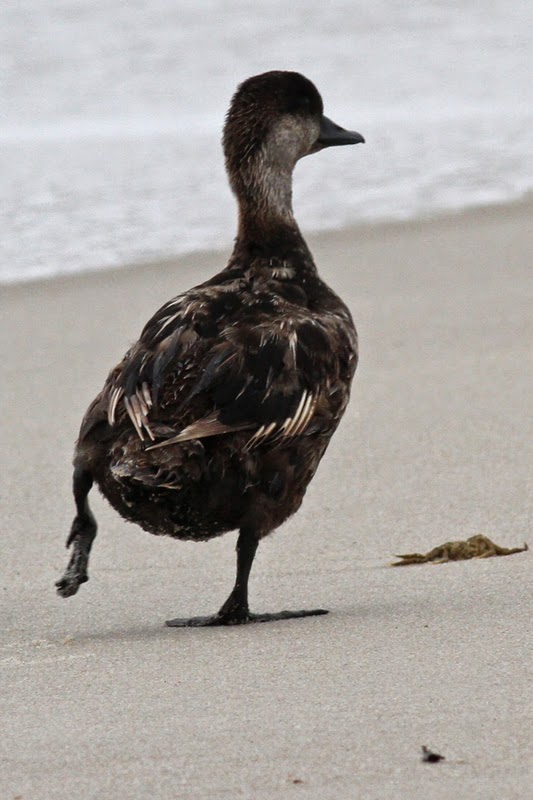 Cape May Point's summering Black Scoters (there's a few Surf Scoters around too) also make for some identification challenges. Look closely at this female and you can pick out the blacker-looking new feathers from the raggedy and faded brown ones. The molt process can render the birds less waterproof than usual, which is why they like to spend time ashore if they can get it. On this bird, you can see a large pale patch on the wing, formed by the shafts of the new primary feathers which are just growing through. Recent reports of White-winged Scoters at the point probably originate from confusion caused by this pale patch on the Black Scoters. At this time of year, White-winged Scoters would have no secondaries - so no white wing! If you have a pond or park nearby, check out the local Canada Geese right now and you will probably see the same bundle of feather shafts coming through on the wings [photo by Mike Crewe]. 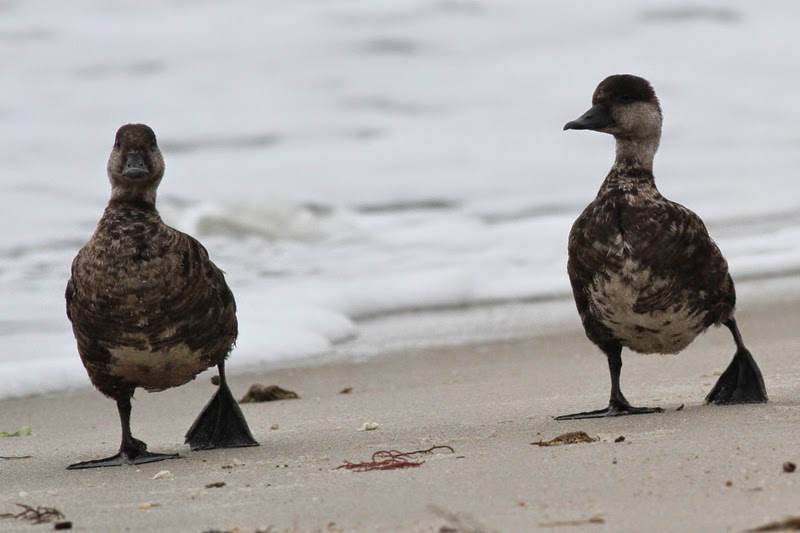 Something else you seldom see - the huge feet of Black Scoters! Diving ducks need big flippers to aid underwater swimming, but it does make them rather ungainly on land [photo by Mike Crewe].
If you have over-summering ducks near you, check them out regularly over the coming weeks and you will see the gradual change as flight feathers grow back in and the plumage becomes less patchy as old, worn feathers are replaced by crisp, new ones.
Posted by Mike Crewe at 11:26 PM