Time to start joining the dots

A series of coincidental, unrelated events and emails have stumbled or snuck into my life of late, and reaffirmed with me something that is a basic essential of life - to see the bigger picture you have to join the dots. If you take each event or decision in your life in isolation, the full significance may be lost, but if you pull it all together - join the dots - things are placed in context and the bigger picture comes looming at you, crystal clear.

After a summer that has seen Lake Lily's Mute Swans make the headlines when they started killing each other, Bunker Pond at the state park continues to collapse as a living ecosystem and our coastlines produce ever fewer beach-nesting birds, it has at times been difficult to press on. Sometimes it's all too easy to feel like a lonely voice in the wilderness, shouting oneself hoarse while facing a solid brick wall. But there is hope; there is an incredible army of people out there who are now calling "Foul!"; who now recognize that it's time we took stock of our surroundings and how we treat it.

Just this morning, I received two emails that were totally unrelated, but which follow a common theme if you join the dots. The first came from John Cecil, New Jersey Audubon's Vice President for Stewardship, and included a link to an online article in northjersey.com. This article, by Bergen County Audubon Society's Don Torino, points out some of the common misconceptions people have about so called 'good' and 'bad' birds. In particular, Torino highlights the problems with Canada Geese in New Jersey - a native species, yes, but one that is not naturally resident here, but which was ill-advisedly deliberately established here for the 'pleasure' of shooting. The article uses straight-talking and facts and is non-emotional.

The second email came from the Xerces Society, an organization that champions the cause for our beleaguered native insect populations. Concern continues to grow over the continuing decline in numbers of our pollinator insects, and if you think they are not important, think of all the food we eat that needs to be pollinated before fruit will form (grapes, apples, pears, peaches, cherries, plums, tomatoes, strawberries, peas, beans, blueberries, cranberries and many, many more). But the Xerces Society offer hope in their latest news item entitled 'Pollinators go to Washington'. More dots to be joined here, as the Xerces Society demonstrate that it is through our legislative system that we have the best chance of really turning things around - and New Jersey Audubon are certainly at the fore here, through Kelly Mooij and her team at the Trenton Policy Office.

Joining the dots again, we can support our lobbyists in getting legislation changed to protect our wildlife and the environment, but I think we have to do our bit too. When I was a child, I think I was in the first generation of kids that didn't learn much about the environment from their parents; now, a couple of generations on, we are paying for that legacy. Time was when kids learned what to touch and what not to touch from their parents; kids learned what wild foods could be harvested and how to recognize them, and they learned how to live 'within' their environment. Of course, pushing back the boundaries of technology and improving our lives is a good thing, but thinking that it means that we don't need to care about our environment, or that the environment is not 'relevant' to those who live in cities is not a good route to travel down - and is patently not true. So we all need to do our bit to understand it a little too - and perhaps the biggest issue we need to get over here is that of what we can trust and what we can't. The internet is full of so much nonsense about the environment and wildlife in general that it can be almost impossible to know what to believe and what not; witness, for example, the storm being whipped up as informed conservationists attempt to save eastern North America's failing wetlands that are becoming inundated by introduced Mute Swans. People are being told that Mute Swans are native and will become extinct if conservationists are allowed to remove them from our wetlands - not true, but people buy into it, because emotions are being manipulated by clever people. As I so often say, if you have a problem with your plumbing, you call in a plumber; there's a problem with the environment - let's call in a trained environmentalist, not someone with a hidden agenda who simply tugs on people's heart strings.

Joining the dots again, let's get wildlife and environmental knowledge back into kids' heads through balanced education programs, so that considered judgements can be made by future generations. If our kids are taught the problems of environments with no insects in them, or environments full of non-native species, then they won't need to rely on jackanory websites for their 'information'.

More joining of dots - a common thread in much of the above is the issue of native versus non-native, whether it be lawns versus meadows, flower borders versus woodland, Mute Swans versus any number of other species pushed out by them, or mantises versus our native pollinators. Time and time again, introductions of non-native species around the world have caused ecosystems to collapse and species to become extinct. Non-native species clearly cause problems in the vast majority of cases and we need to recognize that and do something about it. We also need to recognize that education through a properly structured curriculum is the way to learn how to protect our embattled planet, not through trite nonsense and deliberately emotional heart tugging on the internet.

It's time to start joining the dots. 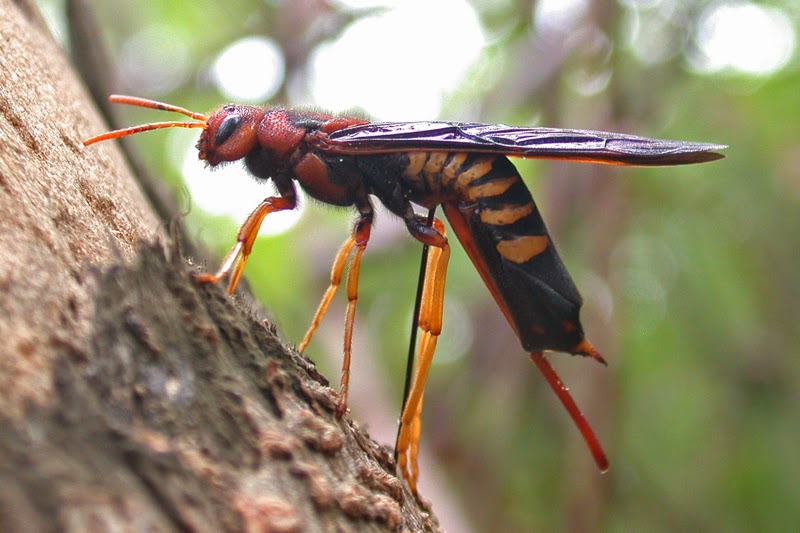 Joining the dots - friend or foe? I found this insect in my yard just recently... What is it? What is it doing? Should I be concerned? The answers to all these questions come through education and an understanding of the world around us that we should be passing on to future generations. So, would you immediately want to run for your camera or get a big stick if you saw this in your yard? If you picked camera, give yourself a gold star! Books call this creature a Pigeon Tremex, something of a nonsensical name that is simply a direct transliteration of it's scientific name - I would prefer to call it Eastern Horntail. The horntails are large (up to two inches long!) and intimidating creatures that, like most wasps, suffer because of the habits of just a few species. The vast majority of wasp species will not harm you and most can be handled without a problem (but make sure you know what you are doing first!!). What appears to be an enormous sting at the back end of this insect is actually a casing that holds the ovipositor - an elongated device for laying eggs (and which is modified to become a sting in the social wasps). The ovipositor itself is out of the casing here and can be seen as a thin black spike sticking down between the yellow legs. The female wasp uses this to drill into a tree stump and lay an egg; amazingly, it also provisions the site with a fungus that will speed up wood decay and help provide food for the developing wasp grub. Creatures such as this may seem whimsical, but they are an essential part of the web of life and failing to understand their purpose and their value will not serve us well in the future. Life is not just here for our mere whimsy... Join the Dots. [Photo by Mike Crewe]
Posted by Mike Crewe at 11:16 AM