Youngsters out and about

This year's crop of young birds are slowly finding their wings now and late July into August is a great time to study local birds a bit closer and to practice sorting out the youngsters from the adults. In many bird species it can be very difficult - if not impossible - to tell the season's youngsters from their parents unless you have them in the hand but, conversely, many other species can be aged by their plumage - and sorting them out can be a restful thing to do on a balmy summer day.

Many young songbirds will have been on the wing for some time as they grow quickly and are soon out of the nest, but young waterbirds and birds of prey are only just stretching their wings now and taking their first tentative flights. Here's a few photos of young birds taken around Cape May this week, with some notes to help you check out the youngsters in your area. 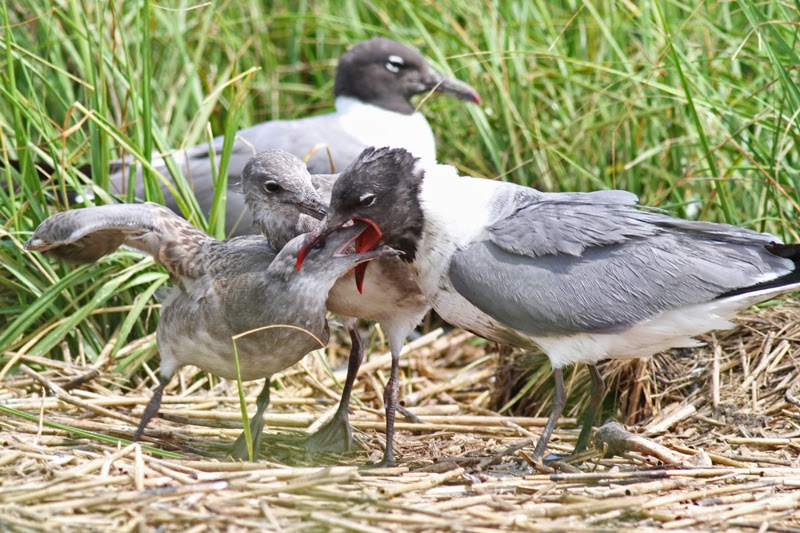 Domestic bliss and an element of decorum can be left floundering in the dust in a breeding colony of Laughing Gulls... Juveniles of most gull species initiate a vomiting response from their parents by persistently pecking at red areas on the bill. This ensures that the food is delivered safely, direct to the chick (it's not quite as bad as it seems as birds have a sort of pre-stomach storage area called a crop, from where they are able to regurgitate stored food) [photo by Mike Crewe] 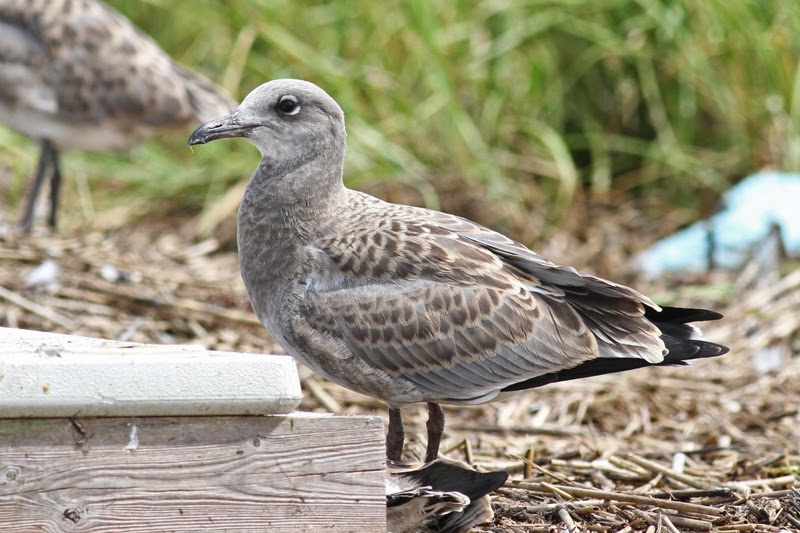 Juvenile Laughing Gulls show some features that are typical of the juveniles of many bird species. Most obvious here are the broad, buffy tips to the upperpart feathers. These probably set the young birds apart from the adults visually, so that they can roam freely for a short while without being mistaken for interlopers looking to steal a territory or a partner. The buffy tips subdue plumage markings that would otherwise be seen as a threat or attraction - features that would be dangerous in the hands of one so young! [Photo by Mike Crewe]. 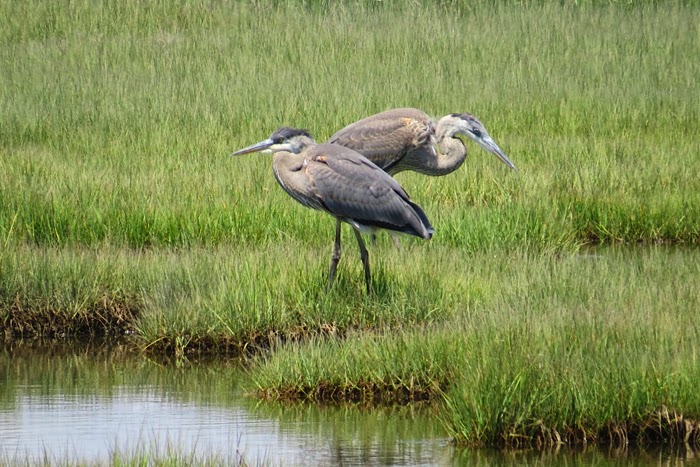 Although Great Blue Herons do not breed with us in Cape May County, they do breed in New Jersey and this year's youngsters are now arriving in the backbay marshes. Note again here, the buffy tips edging the upperpart feathers, as well as the subdued head pattern [photo by Warren Cairo]. 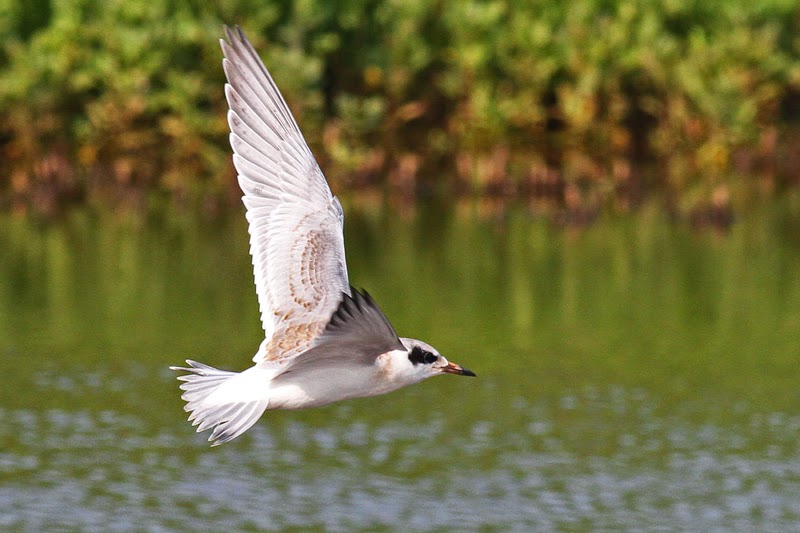 Locally hatched and reared, young Forster's Terns are on the wing at Cape May Point now. Again, we see buffy brown tips to the upperparts and a subdued head pattern. As with the Laughing Gulls above, head patterns send powerful signals to potential partners or rivals, so juveniles go straight into a non-breeding type head pattern to avoid needless confrontation. With Forster's Terns, this means a white head with a black 'bandit' mask [photo by Mike Crewe]. 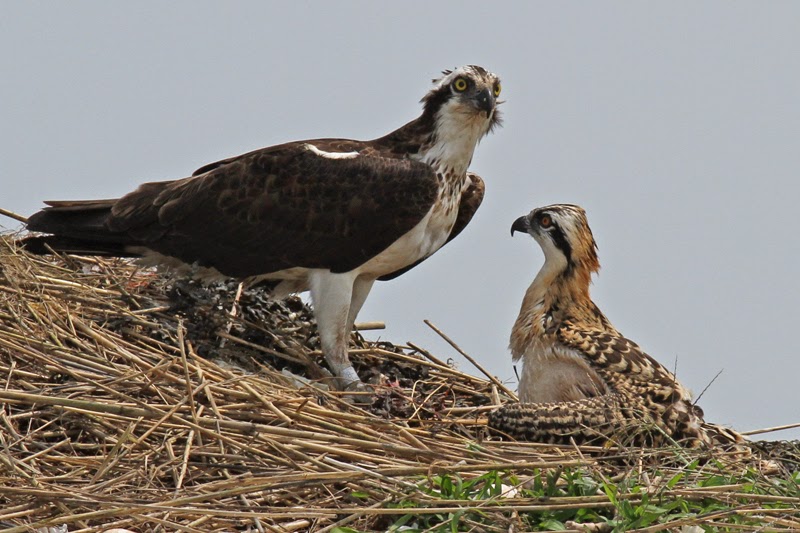 If you are on a backbay boat trip, you'll be overloaded with great Osprey photo opportunities. Most nests now contain wing-stretching youngsters, while the more advanced are already taking their first, unsteady flights [photo by Mike Crewe]. 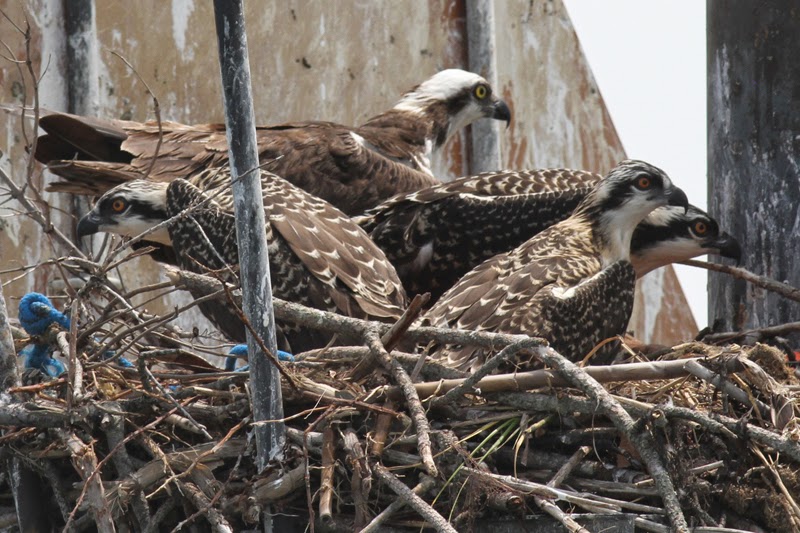 That's what I call a nestful! Ospreys typically have two to three young and nests are getting pretty crowded right now. Note in both these pictures the brown-backed adults that contrast with the scaly-backed youngsters [photo by Mike Crewe]. 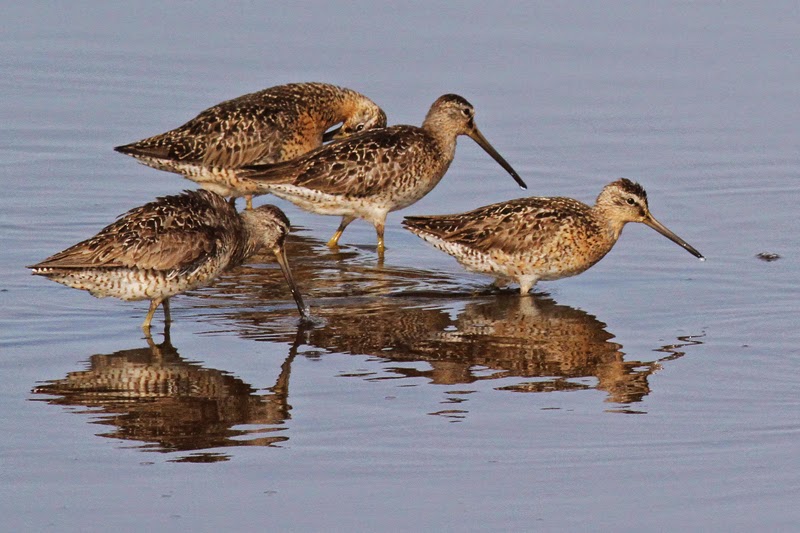 In contrast to our local breeding birds, shorebirds heading down from Arctic breeding grounds right now are likely to all be adults until we get into August. Casting an eye over this group of Short-billed Dowitchers at The Meadows, notice how variable they look in comparison with each other. These are adult birds in various stages of molt from breeding to non-breeding plumage so they show a mixture of two feather types, giving them an untidy look when compared to neat youngsters, whose feathers would now be all of the same age [photo by Mike Crewe] 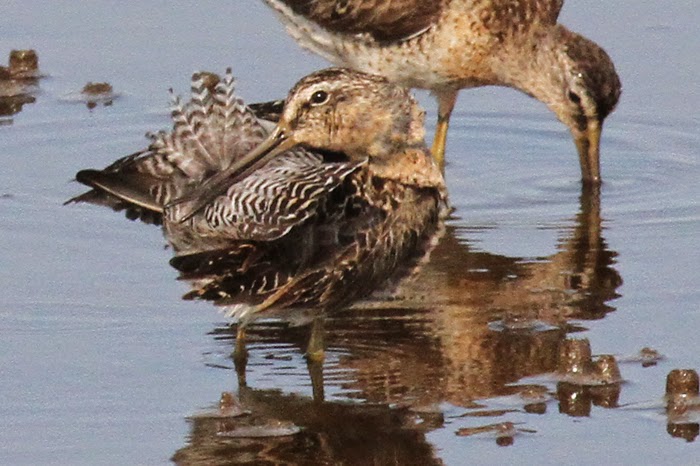 Much preening takes place during molt cycles and new feathers need to be weather-proofed as they grow through. Many bird species (especially waterbirds like this Short-billed Dowitcher) have a gland at the base of the tail that produces a waterproof secretion. Watch carefully and you will see birds collect oil from the gland in their bill and then work it into the feathers while preening. One other cool feature you might notice on this dowitcher is the flexible tip to the bill - note how the two halves are bent outward near the tip here [photo by Mike Crewe]. 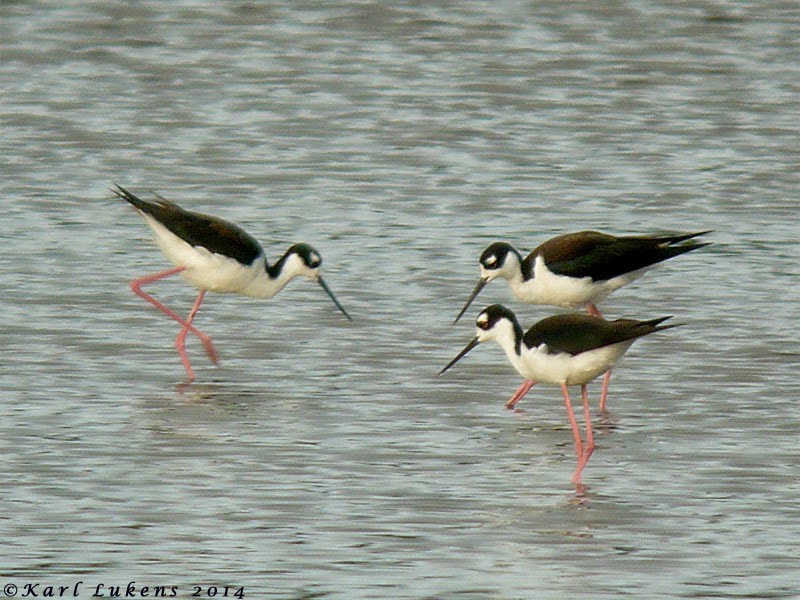 And finally - post-breeding wanderings have begun for some species, so it pays to be out there as much as possible now. These three Black-necked Stilts visited The Meadows briefly on Sunday but headed out before the end of the day. Though some brief but heavy rainfall showers have thwarted plans a little, The Nature Conservancy continue to do well in providing good feeding habitat for migratory birds - let's hope that the idea spreads to other properties and we can help tired migrants by providing suitable habitat for them [photo by Karl Lukens]
Posted by Mike Crewe at 8:33 PM