--===============--
WATERFOWL THROUGH KITE
A disturbingly large congregation of Mute Swans remained at Tuckahoe WMA this week, with 54 individuals counted there 8 Jul (CB, CM). CMP's summering Black Scoter flock still numbered between 80–100 individuals through the period, along with at least 3 Surf Scoters (m. ob.). A Red-breasted Merganser, also summering locally, was again reported from Jarvis Sound 6 Jul (SGa). Gadwall continued to be reported on a daily basis from Cove Pool, SCMM, and CMPSP, with a maximum of 7 at SCMM on 8 Jul (VE). Evidence of breeding at these sites remained elusive. Another land-based report of Great Shearwater was logged this week, when one flew south past Sunset Beach 9 Jul (m. ob.). Wilson's Storm-Petrels continued to be seen in small numbers from CMP, and 7 were tallied during the New Jersey portion of a ferry crossing 10 Jul (JS). Occasional reports of Brown Pelicans continued to trickle in as the week progressed; the period's max of 6 was notched at Poverty Beach on 6 Jul (AC). Great Blue Herons are largely absent from Cape May County during late-spring and early-summer, but apparent southbound migrants start to appear in Jul as demonstrated by 9+ over CMP on 5 Jul, following the passage of a cold front (TR et al.). Jul also likely serves as the peak for Glossy Ibis migration-- 150+ headed south past Cape Island 5 Jul (TR et al.). A Mississippi Kite over SCMM and CMP 5 Jul was undoubtedly a product of northwest winds (m. ob.). 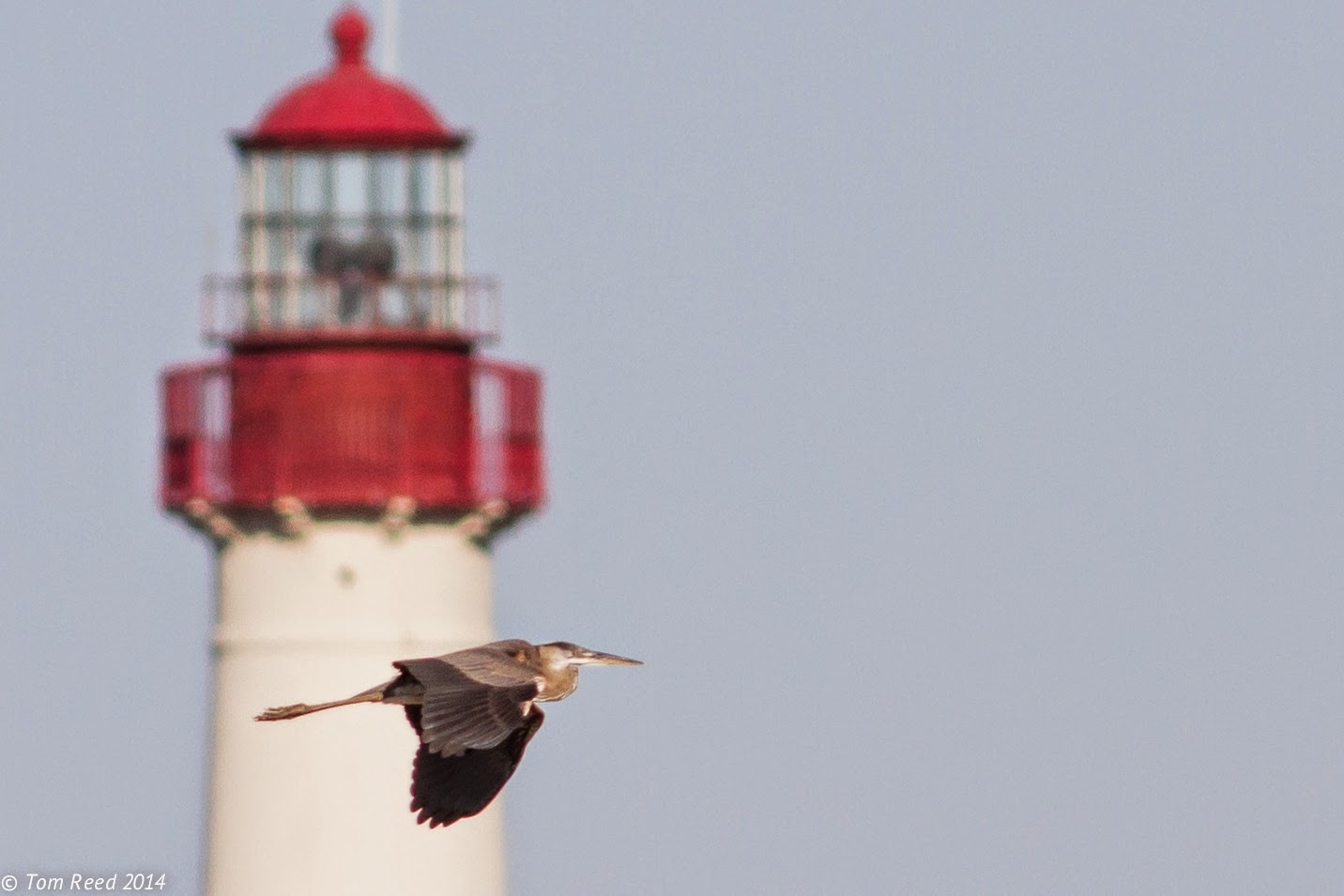 [Great Blue Heron arriving from offshore and
dropping into SCMM, 5 Jul. Photo by Tom Reed.]
SHOREBIRDS
Piping Plover continues to struggle mightily this summer, with just a single pair still attempting to nest in the county as of 11 Jul (NJDFW). On a happier note, shorebird migration picked up the pace this week. Southbound American Avocets were exceptional on multiple days at Cape Island. A brace was observed fleeing Cove Pool toward Delaware 8 Jul (DW), followed by a trio over SCMM 10 Jul which eventually exited toward the west (WC, AC). Northerly winds produced a light but steady flight of shorebirds at SCMM 9 Jul, including 42 Lesser Yellowlegs and 48 Short-billed Dowitchers (SR). The next day, rainy conditions teamed up with northwest winds to produce another morning movement that included 30+ Whimbrel, 40+ Lesser Yellowlegs, 60+ Short-billed Dowitchers, and 100+ Least Sandpipers over SCMM 10 Jul (m. ob.). Upland Sandpiper has unfortunately become a scarce fall migrant at Cape May, therefore one was a most welcome sight in the dunes at SCMM 5 Jul (VE, m. ob.). The season's first Stilt Sandpiper flew over West Cape May 9 Jul (MO'B). 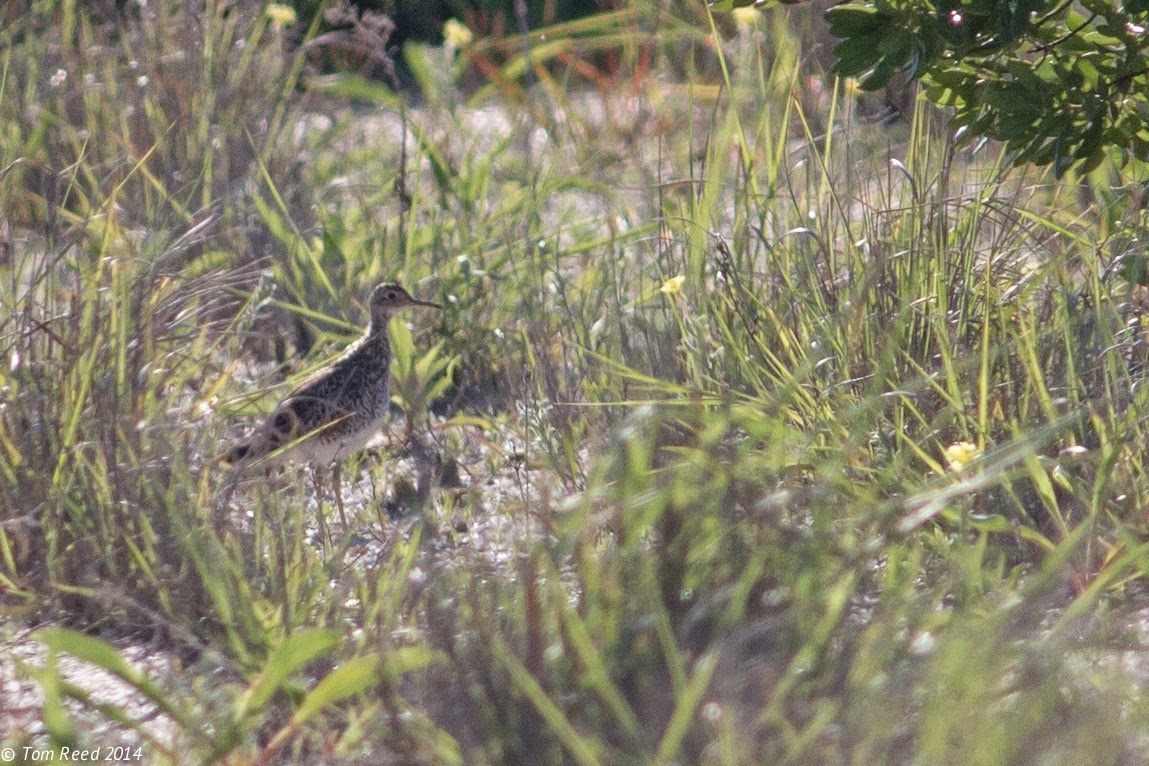 [Upland Sandpiper at SCMM, 5 Jul. Photo by Tom Reed.]
JAEGER THROUGH TERNS
Increased numbers of gulls and terns were feeding in "the rips" offshore CMP this week, and this influx likely drew in a slightly unseasonal Parasitic Jaeger, reported from the Coral Avenue dune crossover 8 Jul (SGl). Scattered Lesser Black-backed Gulls continued to occupy beaches along the ocean side and at Cape Island, including 6+ encountered at SCMM in recent days (m. ob.). Terns were also in the news this week. The year's first Sandwich Tern, an adult, was photographed at SCMM 7 Jul (m. ob.), and the same or another was noted at CMP 9 Jul (MK). Rare in Delaware Bay north of Cape Island, another Sandwich Tern put in a brief appearance at Reed's Beach 8 Jul (TR). At least 2 Roseate Terns played hide-and-seek with birders between SCMM and CMP through the week, and a Black Tern visited CMPSP 8 Jul (SGl). Tuckahoe WMA continued to host Gull-billed Terns on a regular basis, and at least 4 were studied in the impoundments there 8 Jul (CB, CM). 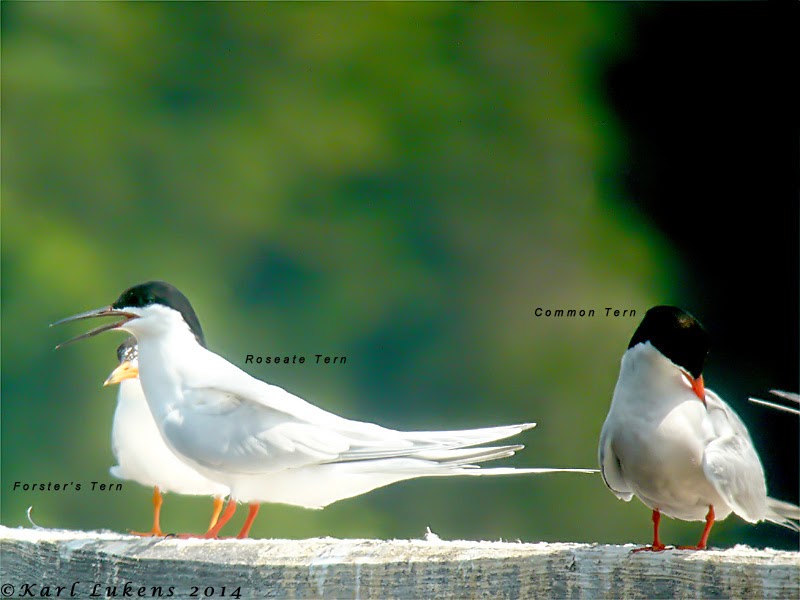 [Roseate Tern at CMPSP, 8 Jul. Photo by Karl Lukens.]
COLLARED-DOVE THROUGH BOBOLINK
After a lengthy absence, a/the Eurasian Collared-Dove surfaced at CMP this week, with the most recent report coming from the corner of Lehigh & Lincoln Avenues 11 Jul (WC, m. ob.). Observers are encouraged to continue reporting any sightings of this species. Cliff Swallow occurrences in Cape May seem intensely tied to westerly winds-- 8+ were found at SCMM and CMPSP during strong northwest winds 5 Jul (m. ob.). New Jersey's 4th Brown-headed Nuthatch briefly made its presence known at the Coral Avenue dune crossover, CMP 5 Jul (MO'B, LZ). It has not been reported since. Perhaps not surprisingly, all New Jersey records of this southern species have occurred at CMP, and 3 have been discovered in the dune-top pines along the bay side of town. Southbound songbird migration is just starting to fire up. The aforementioned cold front produced a few migrants over SCMM and CMP 5 Jul, including 9 Indigo Buntings and 4 Bobolinks (m. ob.). Single Bobolinks were also noted flying over Reed's Beach 6 Jul and 11 Jul (TR).