Birds, Yes, But It Was All About the Monarchs

[This Northern Waterthrush peeked out of the brush at Higbee this morning. Click to enlarge photos.]

The main event today (Saturday), perhaps the main event of the season, was the Monarch butterfly flight. It would not be unreasonable to say more than one half MILLION Monarchs passed through Cape May Point today, and many are still there right now, roosting in sheltered spots after nectaring on native sunflowers and seaside goldenrod, as well as butterfly gardens throughout Cape May Point. Counting sometimes yielded 200 migrating Monarchs a minute - that's better than 3 a second - and that was just insects traveling down the dunes. Jenny Howard, our Monarch Naturalist, has more on today's epic flight on View from the Field.

Birds. A decent warbler flight included a cooperative Cape May Warbler in the fields at Higbee, amidst 15+ species for my party and surely more overall, though things quieted down quickly there. Marsh birds made for bigger headlines, including a Least Bittern in Lighthouse Pond first reported by Tom Johnson not far from the bird blind. Mike Crewe later saw a Sora walk past the bittern. The hawk flight was good too, over 1,000 birds, but . . . 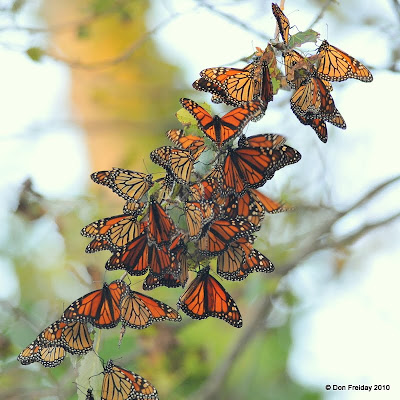 [Monarchs clustered on many of Cape May Point's streets today, including Stites and Yale; the latter street is where these were photographed late today. Dense roosts generally don't form until colder weather arrives.]

Winds are forecast to be very light out of the east tonight, and light north-northwest-northeast tomorrow, with clear skies. Neither optimal nor bad overnight, and certainly very good for listening. Tomorrow should feature more songbirds, high hawks and monarchs.
Posted by Don Freiday at 9:38 PM