[Olive-sided Flycatcher at Higbee (over the port-a-johns) this morning. Click to enlarge photos.]

Like I just told Dave Lord when he asked how the CMBO Higbee Beach WMA walk was, we have no right to complain - Olive-sided Flycatcher, 2 Yellow-bellied Flycatchers (same spot they were seen earlier in the week, nw corner of second field), an Alder Flycatcher, about a dozen species of warblers - and yet, frankly, the landbird flight was underwhelming given the weather conditions. The raptor show helped make up for it, with harriers, kestrels, coops, a Sharp-shinned, and a Peregrine. The list is up on field trip reports.

The Baird's Sandpiper is still up on the Higbee dike impoundment, and a Black Tern flew by the hawk platform this morning. A Red Bat flew past, and CMBO Interpretive Naturalist Alyssia Church somehow found it perched, or rather hanging, and put one of the hawk watch scopes on it for the crowd. Tom Johnson photographed a Connecticut Warbler at Hidden Valley.

[This American Redstart was taking advantage of a hatch of moths, which flew up in waves from the grass as we walked. I'll leave it to Mike Crewe to sort out what species they are.] 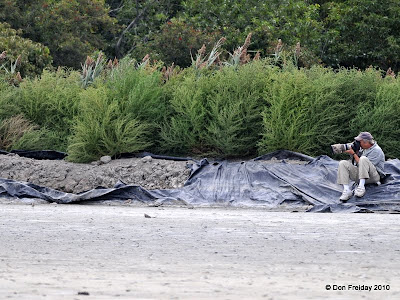 [In case anyone doubts the Baird's Sandpiper on the Higbee dike impoundment, Kevin Karlson seems to have it pretty well documented - the bird is at far left.]
Posted by Don Freiday at 12:48 PM