This afternoon during a nice-but-distant-and-high raptor flight, one of the resident Bald Eagles -- the one with the missing 7th primary on the left wing -- was seen to chase a few fish-laden Ospreys around. It was obviously trying to be helpful and unburden said Ospreys, thus alleviating the Osprey of the energy-expensive process of carrying those large fish from the Bay to some pole or snag on land. It chased one Osprey out over Cape May and that Osprey put one good move on the eagle and the latter gave it up for a lost cause. However, not very many minutes later, the action started up much closer to the Hawkwatch platform, and the many photographers on deck went to town, spending phosphors like they were water (or some such metaphor). 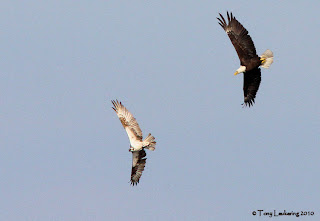 The chase was on, with the Osprey putting in a great effort at evasion and covering lots of airspace. Then the eagle made a play directly for the fish... 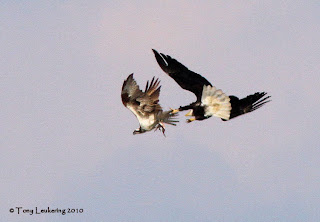 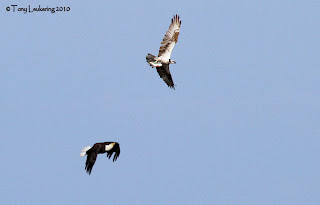 ... that this adult Osprey neatly, but barely, evaded. After a while, though, the
nearly inevitable happened, as the Osprey let go of the fish... 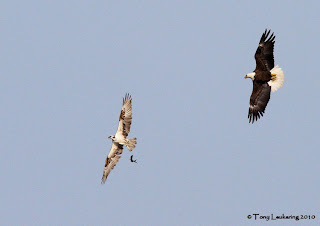 ... with the eagle swooping down to grab it. 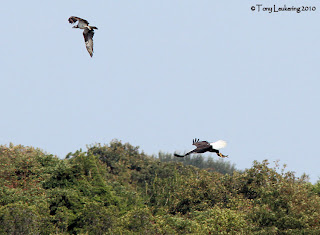 The eagle then dropped down onto one of the hummocks in Bunker Pond for a quick snack of fish and chips (minus the chips). 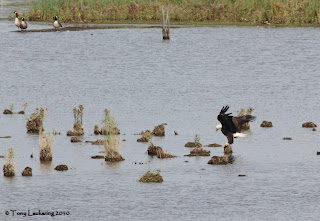 The Bald Eagle had managed to down a fair portion of the fish in a few gulps, when sharp-eyed observers on the platform noticed a new player entering the field. It seems that our kleptoparasite was about to feel the sting of payback. 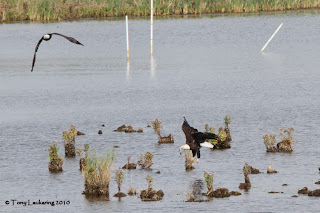 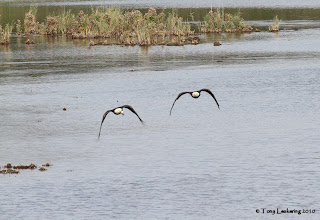 Interestingly, Bald Eagle number one carried the fish off in its beak, rather than its feet, something that surprised many of us. Regardless, though, of the transportation method, what was left of the Menhaden... 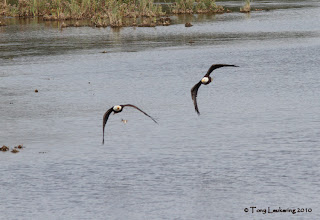 ... was dropped into Bunker Pond to, as they say and I just couldn't resist, feed the fishes.
Posted by Tony Leukering at 8:42 PM