Well, not quite. But, we may be experiencing the best ever flight of Striped Saddlebags (Tramea calverti) into New Jersey of this tropical relative of our familiar Carolina Saddlebags (T. carolina). The recently-published "Field Guide to Dragonflies and Damselflies of New Jersey" (available from the various NJ Audubon book stores) states that the species has been "observed sporadically ... 1992 to 1994 in Cumberland and Cape May counties" but that it had not been encountered in the state since 1994

Michael O'Brien found virtually all of the first dozen or so, most of them in September and most of them in the town of Cape May Point, with many of those seen in large insect flights (dragonflies, butterflies) along the dunes with the Striped Saddlebags seen heading out across the Bay to the NW. However, the rest of us interested enough to sort through the gobs of Carolina and Black saddlebags (T. lacerata) are catching onto their slightly different appearance. One very obliging individual posed for Doug Gochfeld and others on the Hawkwatch Platform in Cape May Point State Park yesterday and Doug snapped the first decent pictures of the species this fall that were not taken by Michael. Today, a group of us walking in the area around Lily Lake checking out the warbler show (Steve Bauer, a couple of visitors, and I) found at least seven (probably eight) of them. One of these, a young male, nicely posed on various car antennae right in front of the Northwood Center, allowing me to snap nearly full-frame pictures.

In the pictures below (the first two of the aforementioned young male Striped, the third of a male Carolina), note that young male (and all female) Striped Saddlebags sport two pale thoracic stripes (Carolina lacks them, as do adult male Stripeds), a more solidly black or dark brown tip to the abdomen, and differently-shaped "saddlebags." On Striped, the saddlebags are thin (from left to right), run parallel to the body, and are smooth-edged. The slightly larger but similar Carolina Saddlebags exhibits larger saddlebags (extending farther out toward the hindwing tip) with a decidedly jagged edge. 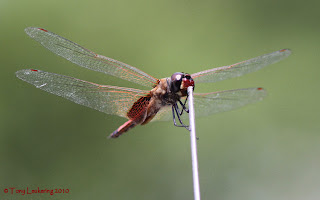 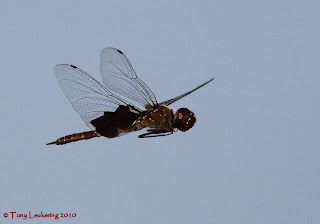