Thursday: Round-up of a Fine Day 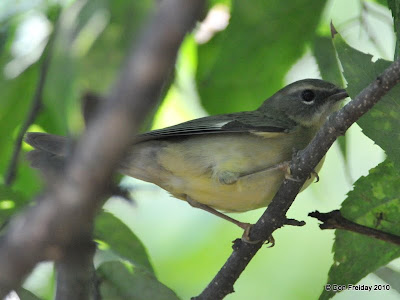 [One of at least a dozen species of warblers around Lily Lake in the late afternoon yesterday, this female Black-throated Blue Warbler was next to CMBO Northwood. She's got the white patch at the base of the primaries - some don't, in which case look for the dark cheek, white eyebrow and eye arc below as clues. Click to enlarge.]

It's 5:00 a.m. Friday and birds are passing outside - Veeries, redstarts, blackpoll/yellow's - all heard through the window. Time to go!

But before that, yesterday was good, but not, how shall we say, spectacularly good as some had predicted. I'm VERY curious about today - probably one of the top ten days of fall, especially if you like warblers.

Yesterday's highlights included 909 warblers of 21 species counted at the dike, and about 15-20 species detected around Lily Lake and near the Northwood center. We're pretty much at the peak of warbler diversity right now. A female Golden-winged was at Higbee and a "Brewster's " hybrid was among the Lily Lake crowd.

And the shorebirds: flyby Wilson's Phalarope in the morning and an amazing Red Phalarope in the afternoon, both at the hawk watch (a/the WIPH was seen at the West Cape May Impoundments, too). The REPH was in the company of, can you believe it, a Buff-breasted Sandpiper. A Baird's Sandpiper was at the Higbee dike late in the day. Two Stilt Sandpipers, beautiful juv.'s, were hanging out in front of the platform today. Among the funnier events of yesterday morning was the Marbled Godwit that flew by the dike at Higbee, apparently undetected by a long string of expert observers but discovered after the fact in a photo.

A fabulous Cliff Swallow movement was underway, with over 250 counted from the platform. American Kestrels were steady all day at the hawk watch, 471 total on the day out of 735 total raptors recorded. 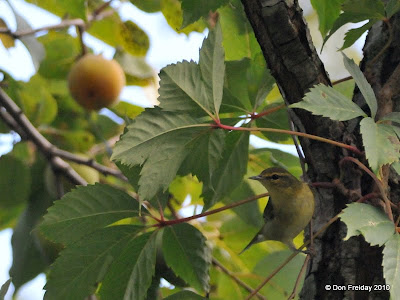 [Another confusing fall warbler, one you'd like perhaps to call a Philadelphia Vireo, but the bill, shape and active behavior make this one a Tennessee Warbler. West shore of Lily Lake yesterday around 4:00 p.m. The leaves with 5 leaflets are Virginia Creeper, and that's a persimmon hanging in back.]
Posted by Don Freiday at 5:53 AM