Cape May was back in business, though not quite back to full speed as yet. The streets are officially now open more or less throughout the area south of Cape May Canal, except for a few odd spots where water is still lying or sand still awaits clearance from the road. If you plan on visiting Cape May (and why wouldn't you?!) just be prepared for the occasional detour, but you should be able to get to most regular birding locations without any problem. All of the Cape island locations indicated on our bird map are open except for Cape May Point State Park. Park Superintendent, Lorraine McCay tells me that the intention is to re-open the park on Friday, once a full inspection and clean up of all the trails has been completed.

Further afield, all major routes through the county are clear but the situation on the barrier islands is likely to be difficult for some time as that area suffered the worst of the damage, particularly flooding. I heard today that Avalon Boulevard is already open to the public though, so it should be possible to now visit the Avalon Seawatch on 7th Avenue by crossing from exit 13 on the parkway.

Local birders have covered many areas for the first time since the storm today and reported plenty of the expected sparrows, Hermit Thrushes and other late fall birds in the area. A couple of hours of seawatching at Sunset Beach this morning produced a couple of storm-petrels which were likely Band-rumped or Leach's but perhaps too distant to call for certain, plus a few more Pomarine Jaegers (glorious in early morning sun!) and a smart juvenile Black-legged Kittiwake. Lesser Black-backed Gulls were at Sunset Beach and 2nd Avenue Jetty, as were Black Skimmers, while a flock of 12 Brown Pelicans circled over the point, moved east along South Cape May Beach, then north over the city. A White-winged Dove was reported from Higbee Beach, a Lark Sparrow was near the state park entrance and a third Eurasian Wigeon (another male) was discovered on Lighthouse Pond - viewable from Lighthouse Avenue. A Red Phalarope spent quite some time on the beach along the bayshore in Del Haven and five White-rumped Sandpipers were reported from there. Don Frieday sent news of a Red-billed Tropicbird that he identified from a photo, sent to him by a bird rehabilitator. At present, we don't know where the bird was picked up but it would be an excellent find in New Jersey.

Good news is, business as usual at our stores and on our walks! CMBO's regular events are back on schedule so, now that we are heading into November, that means our next walk will be at The Beanery on Saturday, November 3rd - we'll see you there! 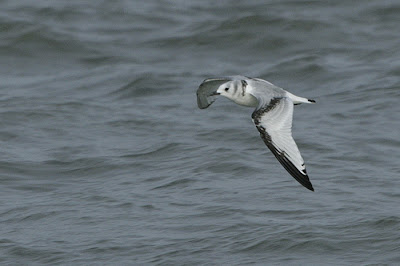 Today's highlight for me was this juvenile Black-legged Kittiwake which flew out of Delaware Bay early this morning. Kittiwakes are graceful and agile fliers and that dark V across each wing makes it a very attractive bird [photo by Mike Crewe]. 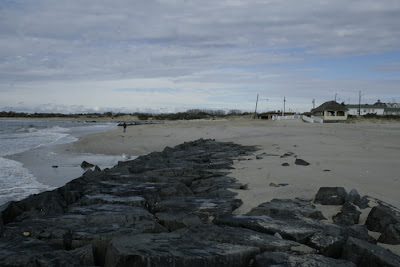 What a difference a day makes. If you saw the Lapland Longspur on 2nd Avenue Jetty last weekend, you might not recognize this as the place you saw it! Most of the stone jetty has been buried in tons of sand, all pushed up by the storm surge which actually built up some of Cape May's beaches rather than washing them away [photo by Mike Crewe]. 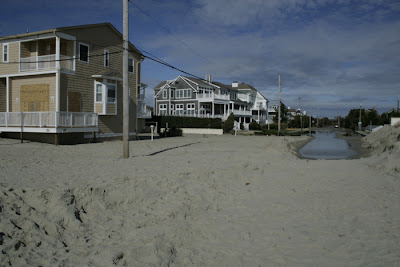 Some streets remain to be cleared - this is the corner between Beach and Wilmington Avenues - the sand was some six feet deep where I was standing [photo by Mike Crewe]. 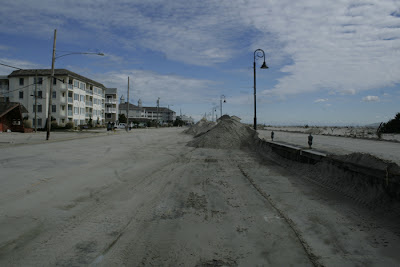 Cape May's utilities people are being super efficient and much of the sand is off the road and awaiting transportation to somewhere more useful [photo by Mike Crewe]. 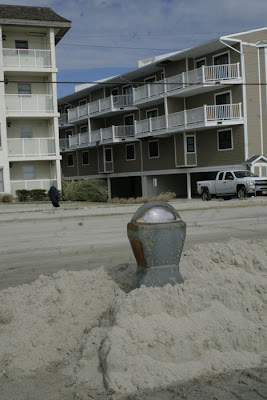 You always wanted to do it - Sandy did it for you! Cape May's beach front parking meters were buried and out of the way, if only for a day! [Photo by Mike Crewe]
Posted by Mike Crewe at 5:40 PM