As winds and rain start to pick up at Cape May on Sunday afternoon, we wish everyone good speed as they make their journeys away from what looks like being a very battered New Jersey coast over the next 48 hours or so. Though there is, of course, no good time to be slammed by a hurricane which looks set to merge with a storm moving in from the north-west to make what I hope is no more than a once-in-a-lifetime experience, it is fair to say that Sandy could hardly have picked a worse time to descend on CMBO. Though our Autumn Weekend participants enjoyed a wonderful two days of birding at Cape May, Sunday was marked as mandatory evacuation day and we had no choice but to call a terribly abrupt end to our Fall season. Though saying a premature farewell to all of our birding friends who were attending our festival was hard, for me it was particularly sad to have to make all too premature plans to see off our fabulous seasonal interpretive naturalists and counters. The comments that I have received from visitors to our seasonal monitoring sites this season have been nothing but glowing and CMBO is proud to have been represented to the public by such a stellar team of dedicated and professional people. Please join me in wishing them all the best in their forthcoming careers and thanking them for doing such a fabulous job. You can read short biographies of this year's team by clicking here.

A final morning's birding for me around Cape May Point revealed a community battening down for a heavy storm, with most people already well out of town. With the streets almost empty, it seemed that every other front yard was busy with bird activity as Chipping and White-throated Sparrows, Dark-eyed Juncos, Yellow-rumped Warblers and American Robins stocked up with food, perhaps unaware of what they were about to face over the next couple of days. Pine Siskins are still swarming the area too - I saw some 40 birds at one feeder, while another front yard had around 120 Pine Siskins crowding over a pile of sunflower seed. Sadly, this latter group were attacked twice by a cat, allowed to roam at will by an inconsiderate owner. Maybe one day America's native wildlife will be protected from such unnecessary problems - they have enough natural things to worry about as it is!! Here's a few pictures from pre-Sandy Cape May. 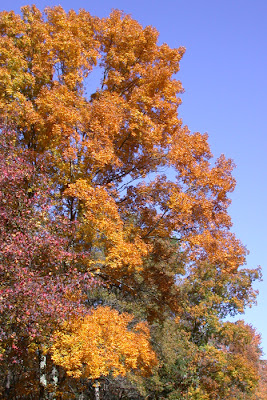 The post I never got around to! Last week, I visited the north end of the county to capture some of the riotous Cape May fall color - such as this Pignut Hickory at Eldora. I guess by the time we return, those leaves will all be in a heap on the ground... [photo by Mike Crewe]. 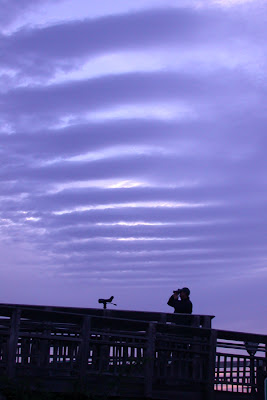 Saturday morning saw perhaps the first of the peculiar outer effects of a hurricane sky. Despite foreboding in the clouds, Tom Reed maintained his vigil at the Hawkwatch [photo by Mike Crewe]. 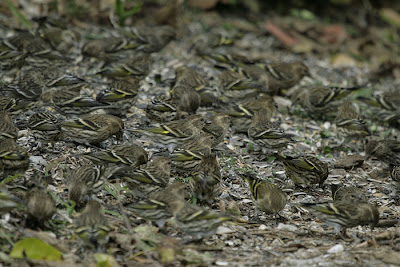 Pine Siskins just keep coming and coming this year. Hopefully the flocks still cleaning out the sunflower feeders at Cape May Point will ride through the rough weather OK and be here to be enjoyed through November [photo by Mike Crewe]. 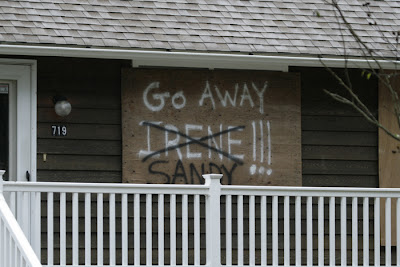 The sign says it all - two years, two hurricanes for Cape May [photo by Mike Crewe].
Watch this space, we will be back soon...
Posted by Mike Crewe at 7:18 PM