So many birds, so little time!!!

There's one huge perversion about Cape May that I tend to fall foul of at this time of year and that is, during October, there are so many birds that it's almost impossible to find enough time to report them all!! A nice problem to have, if one has to have a problem at all, but it doesn't do our regular blog readers any favors if they are relying on postings to plan a trip to Cape May. Well, I guess one thing to always bear in mind is that Cape May is worth coming to every October, as it would have to be a pretty weird year for there to be nothing to enjoy down here.

In reality, we hope that modern technology will help you all to keep up to date with what is going on in a variety of ways. Over the past few months, we have been gradually morphing our blogs into something that we hope you will find more helpful and more resourceful to you and I have to thank Catherine Busch, one of our regular volunteers, for being a main player in this. At the top of any one of our blogs (such as the page you are on now!) you will find a menu bar beneath the header, which will help you to navigate directly to all of our other blog pages. You will find a link to pages that contain bird lists from our walks (Field Trips), daily counts from our seasonal research projects (Seasonal Research) and other links to our stores, local conservation projects and even a news page which will keep you informed on our walks, workshops and other programs.

In addition to these, we have tried to help you in a more predictive way to identify when it looks like it will be a good day for birds. As you visit our various blogs, you will find a range of tools in the left hand margins which give you direct access to information from other sites. Perhaps most importantly if you want news of the rarer species, you can sign up to our Twitter feed which will give you the hottest news much faster than we can through a web page. You will also find a link to Cornell's eBird rarity sightings and links to sites that will tell you tide times, wind direction and even migration predictions. In the mean time, our View from the Cape blog will feed you regular doses of the birds of Cape May and keep you excited enough to want to be heading back just as soon as you can!

So for now, here's the cheap and easy route - just a few of the awesome photos that I get sent on a daily basis from those souls fortunate enough to have been here lately - when did you last Bird Cape May?!! 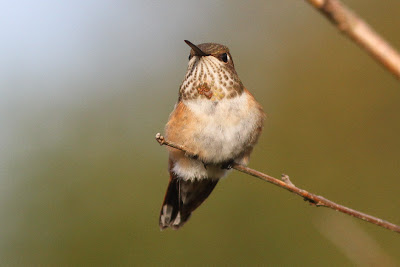 Though Rufous Hummingbird is a western species and not one we should expect to see on the east coast, small numbers do turn up annually and this October has been no exception. Though typically appearing later on in November, we don't mind enjoying them in October - this individual was well-watched at feeders on Stevens Street, at the residence of Michael O'Brien and Louise Zemaitis [photo by Micheal O'Brien]. 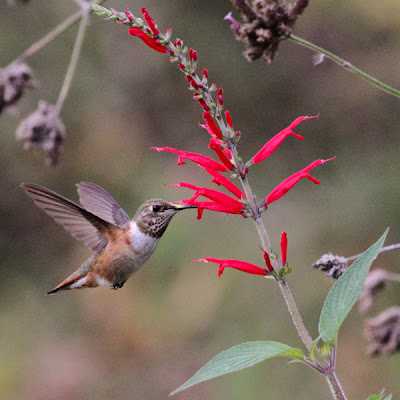 Almost certainly a Rufous, though we still await the clincher photo that shows the tail tips, this hummer has been visiting a backyard in Del Haven recently [photo by Bob Fogg]. 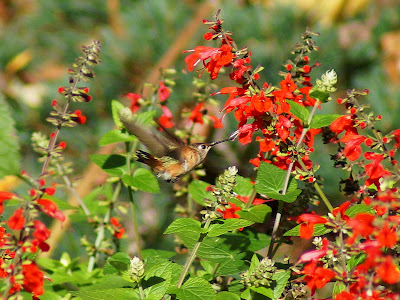 Further afield in Salem County, another probable Rufous Hummingbird but awaiting that clincher shot - here feeding on one of those amazing red sages that I am sure you all have in your yards [photo by Jeff White]. 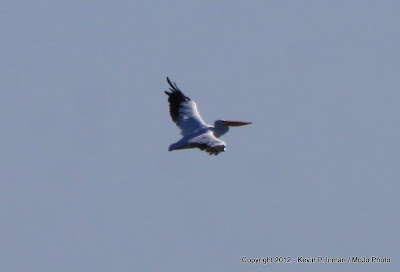 Well-watched now after staying for a few days, this American White Pelican was first reported to me by Kevin Inman and Jim Halfpenny as it rose from a flock of cormorants at Brigantine on 14th [photo by Kevin Inman]. 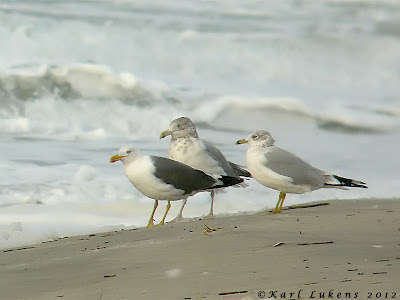 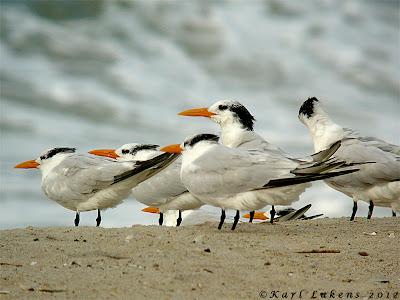 Royal Terns have been very noticeable by their presence for several weeks now and continue to show well along the South Cape May beach or out in the rips [photo by Karl Lukens]. 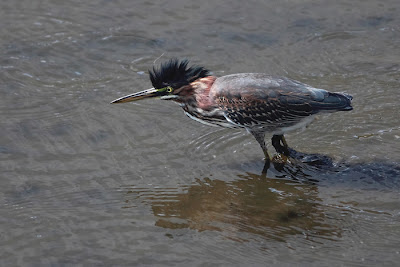 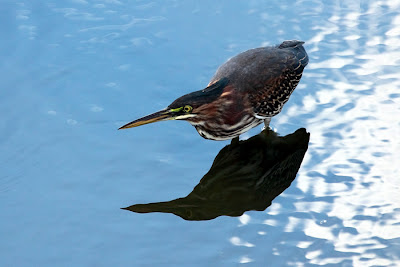 Sometimes it's nice to post some pictures just because they are great pictures and not because they are of anything super rare. These two shots of a Green Heron fit the bill nicely and were taken recently at Brigantine by E J Nistico. 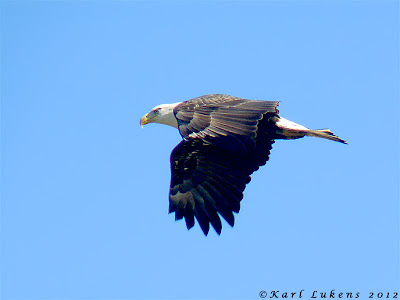 Above all (perhaps!) October is about raptor movements (I feel yet another blog post coming on!) and is so often the time when you get that real 'up close and personal' encounter at the Hawkwatch Platform. This adult Bald Eagle cruised right by in front of a very appreciative audience this week [photo by Karl Lukens].

News of great October, Cape May, birding continues to flood in (and I'm stuck at my desk with a mere two species of nuthatch, Pine Siskins, Purple Finches and an Eastern Towhee at the feeder outside!!). The Avalon Seawatch is well and truly open for visitors now with Bob Fogg reporting a very impressive scoter movement today and Tom Magarian having the awesome luck to enjoy nearly an hour of Humpback Whale entertainment there on 15th. Two Red-headed Woodpeckers at Cox Hall Creek WMA on Sunday hopefully mark the return of regular wintering birds there and Monday saw a brief fly-by from a Western Kingbird at Hidden Valley, courtesy of Doug Gochfeld. Clay-colored Sparrows continue to add to an already good year for the species with singles at the Hawkwatch still on October 12th and one at The Beanery on 15th, per Paul Guris. A female Common Eider was reported from various locations on 13th and perhaps still lurks in the area and a Swainson's Hawk passed quickly by on 17th.

This morning was one of those amazing Cape May mornings that I will never tire of. The first half hour of our state park walk was simply a stand, as we couldn't get out of the parking lot! The whole time we were there, birds just flooded overhead in a crazy milling about as they pondered a Delaware River crossing. Thousands of Yellow-rumped Warblers and Tree Swallows, hundreds of Red-winged Blackbirds, American Robins, Pine Siskins, American Goldfinches and an assortment of American Pipits, Blue Jays, Red-breasted Nuthatches, Palm Warblers, Sharp-shinned Hawks - offshore, there was a madness of gulls and terns feeding in the rips, interspersed with a few Northern Gannets, while the trees further round were ringing with the calls of yet another big Red-breasted Nuthatch day - though today they were also accompanied by several White-breasted Nuthatches and Brown Creepers, also on the move. It's Cape May time again!!
Posted by Mike Crewe at 4:45 PM