Tuesday morning had the phones all going off at the same time - a Northern Wheatear reported from the dune cross-over at South Cape May Meadows! Many cars and bodies were soon heading that way and the bird was shortly re-found out on the beach. This is not the first Northern Wheatear for Cape May, but it did turn into an interesting day for the species. This particular bird worked its way progressively eastward toward 2nd Avenue Jetty and was last reported in that area around 1PM. That could have ended up being an end to the story, but around 4:30PM, a Northern Wheatear was reported on the mown lawn beside the lighthouse (what we like to call the frisbee field!) and Glen Davis shortly found it sitting right on the bench at the east end of the grassy area. Questions then started to be asked; would a bird, that had been working eastward, suddenly have turned around and flown all the way to the west end of the point? Well, yes, I am sure it is possible and certainly not improbable, but the question had been raised. So, having enjoyed both wheatear visitations, late last night I set about trying to compare my photos of the two, looking for any differences or similarities that could resolve the problem - one bird or two...

Well, interestingly, I never came to a firm conclusion and went to bed satisfied that the likelihood of there being two birds was low enough that it wasn't really a worthwhile consideration. Roll forward to 10:30AM today when I ran into someone at the Northwood Center who told me that he had seen the bird on the grass near the lighthouse, then re-visited the beach south of the meadows and found a wheatear to be there too! Most importantly, I was told that the bird on the beach was then photographed around 6PM - I, and several others, were certainly still with the lighthouse bird at 6PM, so, no matter how alike the two birds may or may not appear in photos, it does look as though there was certainly two Northern Wheatears here yesterday. 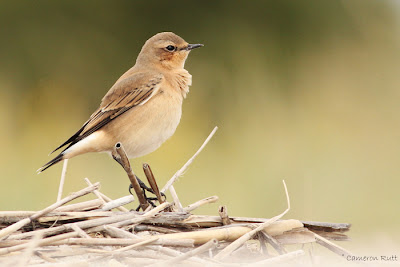 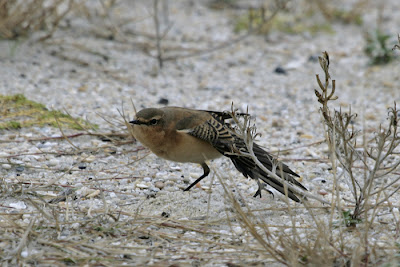 Northern Wheatear number 1 on the South Cape May Beach. Note the very different upperpart color, caused by different lighting conditions, compared with the picture above [photo by Mike Crewe]. 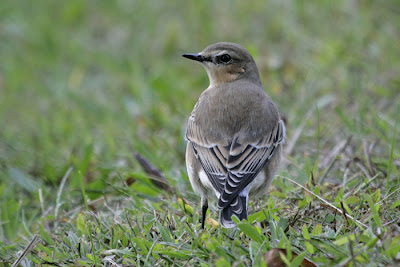 Northern Wheatear number 2 - the afternoon bird in the state park, by the lighthouse. Northern Wheatears are notoriously difficult to age after the post-breeding/post juvenile molt and banders who have them in the hand generally rely purely on the color of the inside of the upper mandible (not too easy in the field!). However, in reality, first-winter birds tend to show much broader pale margins to the tertials and greater coverts and both these birds seemed likely to be first-winter birds [photo by Mike Crewe].

Typically, both of these birds appeared to be of the large, richly-colored race, leucorrhoa which is the form that breeds closest to us, in Greenland and Arctic Canada. Both birds were rather chunky, often pot-bellied in appearance and had rich, almost cinnamon washes to their chests.﻿
Posted by Mike Crewe at 12:15 PM