It's been pretty heavenly at Cape May this week, so good that finding time to post about it has not been easy! The weather has sorted itself out a little this past few days and a run of more typical north-west winds has seen the traditional fall locations of Cape May Point, The Beanery and Higbee Beach brimming with birds. October 7th saw some interesting movements around the point itself, with Pine Siskins dominating a nice movement of sparrows, finches and other songbirds - the same day saw Cameron Rutt tallying over 1100 Pine Siskins at the Higbee Dike and other observers reported Lincoln's and Vesper Sparrows, Horned Lark and a couple of single-observer reports of Pileated Woodpecker. Sam Galick added Western Kingbird and American Golden Plover to the week's totals and several observers reported Red Bats on migration, including a count of 25 in 30 minutes at St Mary's, reported by Dave Hadeen.

October 8th saw a continuation of the excitement of the 7th, with a Swainson's Hawk being seen by many observers at the point, a Red-headed Woodpecker at Higbee Beach and a Sedge Wren at the 'traditional' location of Hidden Valley. Clay-colored Sparrows continued to pop up seemingly everywhere and Bob Fogg reported a probable Rufous Hummingbird from Del Haven - the second of the season so far. 'Classic' late autumn species began to appear in good numbers, with several reports of Brown Creepers and Winter Wrens mingling with tardy Black-throated Blue, Cape May and Blackpoll Warblers. Nocturnal heron flights were noticeable to those who were having trouble sleeping, with small numbers of Great Blue Herons still on the move at first light some days for those on a more regular circadian rhythm. American Moorhens appeared in reasonable numbers, with individuals noted during the period from The Beanery, The Meadows and Cape May Point State Park; the latter gained at least nine American Coots on its ponds too, while The Meadows currently appears to be the best place to seek out Soras.

Late warblers often made up a colorful addition to many people's day lists, with both Prairie and Golden-winged Warbler being reported from Higbee Beach on 9th, two Cape May Warblers at the state park on 10th and a Black-throated Blue Warbler at Hidden Valley on 11th, to name but a few. Sparrows are very much the order of the day at present though, and the fields at Higbee Beach WMA are currently offering a fabulous spectacle of close-up and personal sparrows in all shapes, sizes and colors. Highlight so far has been a Nelson's Sparrow in the first field there on 9th, but no doubt there are more goodies to be found. Today has seen another great hawk flight, overwhelmingly dominated by Sharp-shinned Hawks; weather patterns might slow things for the next 36 hours or so, although there is plenty already here to enjoy - if you're planning on a weekend visit, Saturday morning looks very promising indeed, though I'll hold final judgement on that for another 24 hours yet! 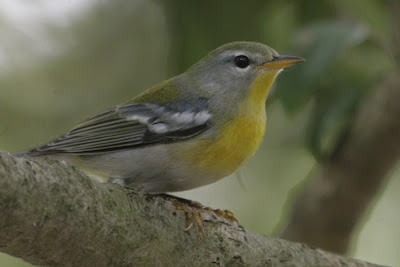 The warbler show at the Northwood Center was a little later coming this year, but eventually there was a nice run of very approachable birds, such as this Northern Parula, photographed from right beside the cash register in the store!! [Photo by Mike Crewe] 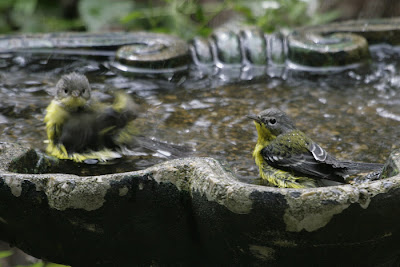 Northwood's bird baths have been busy too - here, two Magnolia Warblers take a welcome dip in front of an admiring crowd [photo by Mike Crewe]. 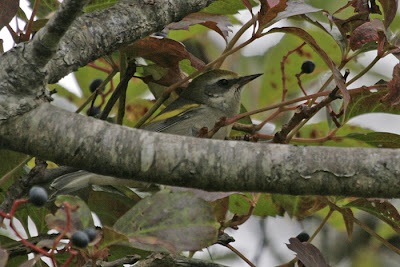 A surrpise treat at Higbee Beach this late in the season was this Golden-winged Warbler, reported by Harvey Tomlinson on October 9th [photo by Mike Crewe]. 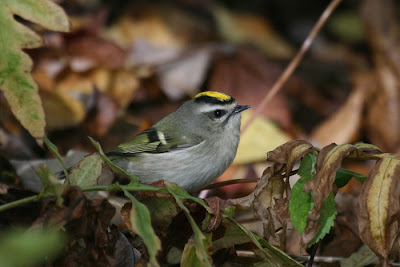 Always a star performer during any Fall migration, Golden-crowned Kinglets are all over town right now... [photo by Mike Crewe] 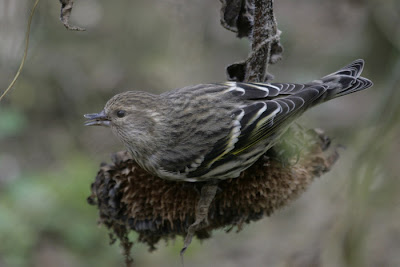 Pine Siskins are moving in very good numbers throughout the region now - for close encounters with these birds, try the sunflower strips at Higbee Beach WMA [photo by Mike Crewe]. 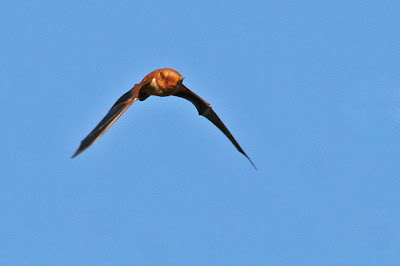 Red Bats are fairly chunky mammals that go through a regular southward migration each fall. Numbers have been low in recent years, but this fall has seen some nice movements on and off throughout the season. Keep an eye out for these if you are migration-watching anywhere around the point in the early morning [photo by Mike Crewe]. 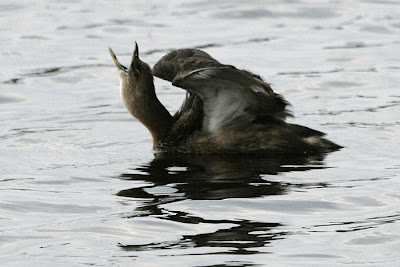 It often comes as a surprise that these little 'penny bun' birds, Pied-billed Grebes, move in appreciable numbers. At least 10 have been hanging out on Bunker Pond lately, with smaller numbers on many other pools in the area. I must admit though, that I have no idea what this one is doing! [Photo by Mike Crewe] 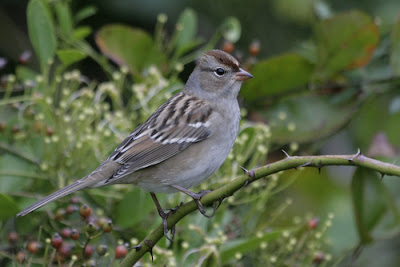 Sparrows are definitely big business right now as we head into the best time to get to know these birds. This first-winter White-crowned Sparrow may not be as snazzy as an adult bird, but it still has a regal look about it I reckon [photo by Mike Crewe]. 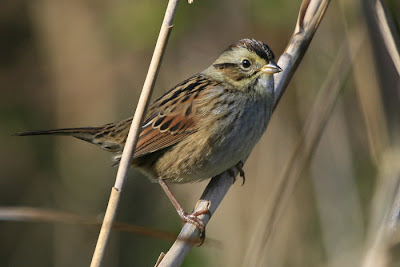 One of my favorite fall birds - Swamp Sparrows can be heard calling from damp fields and tangled corners all over Cape Island right now. To really learn how to become confident at sparrows, you could do no better than to take Michael O'Brien's excellent Sparrows Workshop - coming up October 20-21 and ideally timed to enjoy a wide range of species [photo by Mike Crewe]. 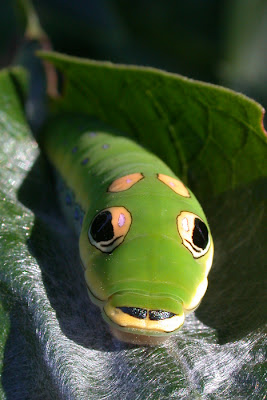 The time for insect-watching may be fast coming to a close, but there are still weird and wonderful things out there for you to chance across. I found this amazingly snake-like Spicebush Swallowtail caterpillar on a Sassafras leaf while searching for jumping spiders with Dick Walton at Higbee Beach [photo by Mike Crewe]. 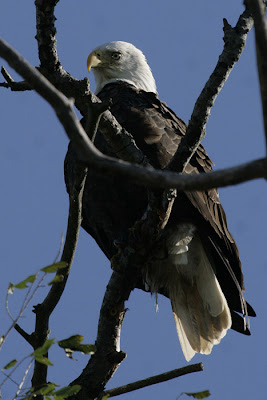 Sometimes, when you have to live somewhere like Cape May, you have to suffer the indignity of good birds right in your yard! The local Bald Eagles have lately taken to de-barking the branches on the top of my Siberian Elm and have been drawing many cameras from their cases! [Photo by Mike Crewe]
Posted by Mike Crewe at 4:54 PM