Just a pile of sticks?

If ever a case could be argued in favor of good habitat, it's a rough old pile of sticks that stands in Cape May Point State Park, right along the south side of Bunker Pond. This is the state park's burn pile; the place where damaged vegetation and all those invasive plant prunings get taken to, ready to be periodically burned. Luckily, state park staff have recognized the value of this pile and tend to leave the burning for later in the year - and what a pile of brushwood it creates, ideal for a whole bunch of birds to take cover from predators in, find food in, and even roost in at night. Sadly, many people these days live in all-too-sanitized plots of land, with the mere sight of a twig or autumn leaf lying on the ground being seen as an eyesore - a blot on the landscape. If you have the room to allow a modest pile of branches to be stacked somewhere in a corner of your yard, you will be surprised what delights it can bring you - and don't be in too much of a hurry to burn it, remember there may be creatures roosting, or even hibernating in there. Here's just a few pictures from the state park brush pile, all taken during a short period this afternoon: 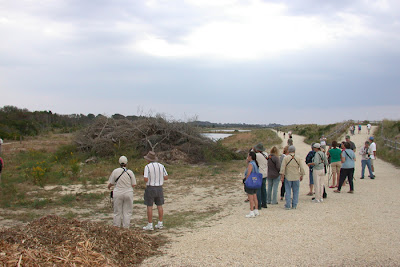 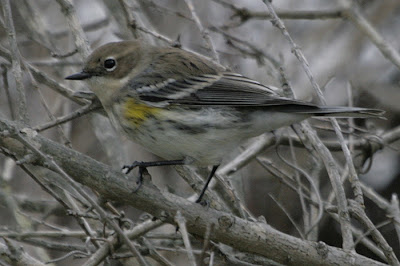 Yellow-rumped Warblers are well and truly 'in town' now and can be expected to dominate warbler movements from now on. Look for them anywhere there is a branch to sit upon! 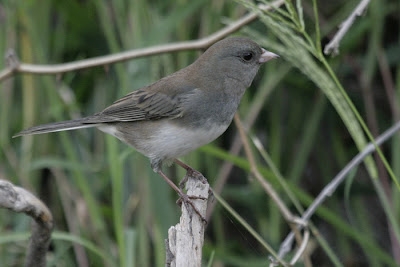 The rapid tail-flicking of Dark-eyed Juncos, revealing flashes of white, will soon be a common sight in our back yards. Small numbers have already started to arrive at the point. 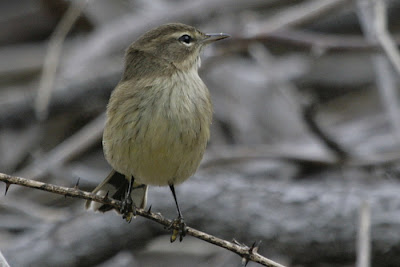 Palm Warblers have been plentiful some days in the brush pile, as well as scurrying around in the dunes. This is a typically drab western birds; birds from the eastern population have extensive yellow on the underparts. 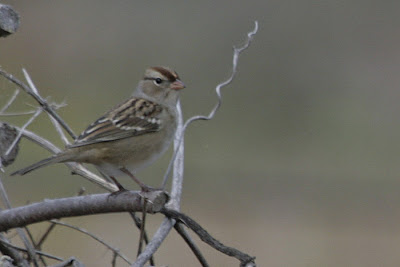 As more and more sparrows pass through Cape May Point, keep an eye out for small numbers of the attractive White-crowned Sparrow. Adults are obvious with their 'skunk-striped' heads, but first-winter birds such as this one are more subtly marked. 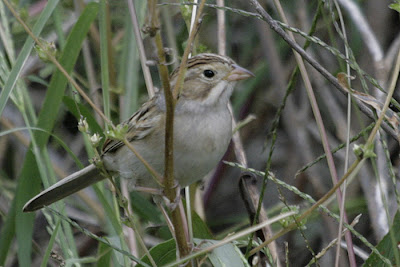 Today's main attraction in the brush pile - a Clay-colored Sparrow. This species continues to increase as a passage migrant on the east coast in fall. 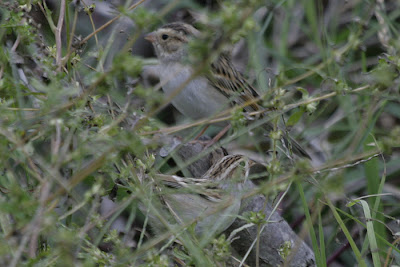 Not a great photo as such, but it's not often that you get a chance to catch two Clay-colored Sparrows in one photograph at Cape May! 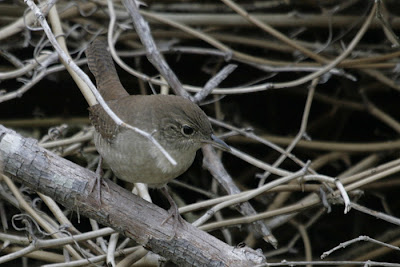 Just to ring the changes, this House Wren also mooched about in the brush pile today [all photos in this post by Mike Crewe].
Posted by Mike Crewe at 10:22 PM