Cape May's mandatory evacuation was announced, people responded. We all held our collective breath and waited. I am sure you have all seen the reports, heard the outcomes. I hoped to put up some maps of the peak of the activity here, but I had no internet service (and it is still only intermitent it would seem) so was unable to follow the exact goings on, or download data. Still, it has been reported as an epic, record-breaking hurricane; a storm which spanned well over 400 miles across and set a new low record for recorded barometric pressure north of North Carolina. Having reached the coast and smashed through the Mid-Atlantic States - the damage done to the barrier islands still remains to be seen - Hurricane Sandy almost immediately became part of a massive low that was already dumping snow on the Appalachians. For Cape May, the one slight saving grace was that the power of the storm meant that it sped up considerably as it neared us, resulting in an earlier than expected landfall (around 6:00PM Monday rather than 2:00AM Tuesday) and a shorter amount of time spent in our airspace. With the eye of the storm passing roughly over Ocean City in the north of Cape May County, we endured nearly five hours of winds over 40MPH, with peaks of over 50MPH between 9:00 and 10:00PM (according to The Weather Channel data) and the rain fell and fell - nearly 6.5 inches was recorded for the region. Flooded basements and lawns were commonplace, but a lot of the rain had soaked away by the following morning.

Many of us were able to assess the damage this morning and with very few exceptions, little or no serious damage was done to property; indeed, many people found that the power had even managed to stay on throughout it all. With winds still whistling and another high tide only just falling back, some of us ventured down to Higbee Beach, then on to Sunset Beach once we were able to get there. Here's a picture story of our day. 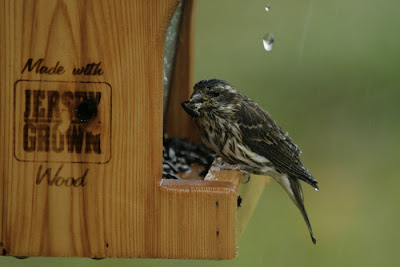 My trustworthy, New Jersey Audubon feeder (available at NJA stores folks!) survived a good battering and provided much-needed sustenance to hungry birds, such as this very soggy Purple Finch which is about to land another big blob of water on its back [photo by Mike Crewe]. 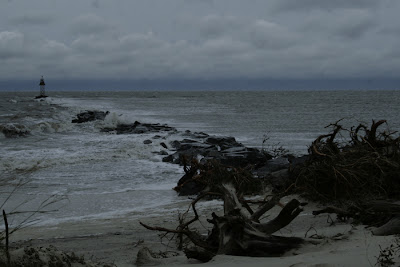 The canal jetty at Higbee Beach this morning. The rocks were almost completely covered with water and tree roots were strewn along the beach [photo by Mike Crewe]. 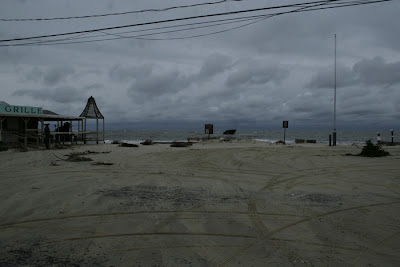 Hearing that it was possible to get through to Sunset Beach, we arrived there to find the whole area covered in a thick layer of wind-blown sand, tree debris and all manner of other bits and pieces. For the second year running, huge thanks are due to the owners of the Sunset Grille for allowing us to use their deck as a watchpoint [photo by Mike Crewe]. 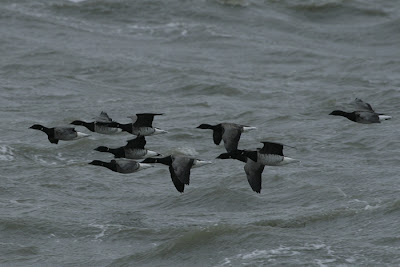 So why Sunset Beach? Well, typically it has been found that birds swept into the coast by a hurricane, start to make their way back to the sea via any larger estuaries and rivers that they can find. Standing watching the bayshore is thus an ideal way to record what is flying out of the Delaware Bay the day after a storm. Typically, such storms bring birds of tropical origin, but this was no typical storm and several people remarked that they had never seen hurricane-driven Brant before! [Photo by Mike Crewe] 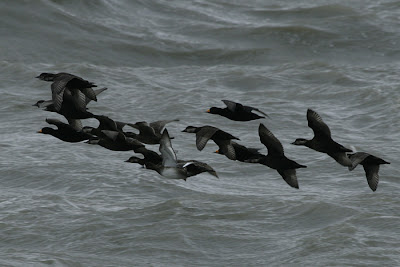 Checking every single bird is important on a day like today - note the female Lesser Scaup with the strong white wing bars, in this flock of Back Scoter [photo by Mike Crewe]. 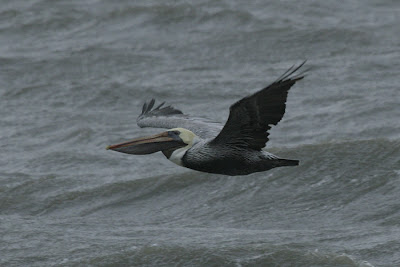 Scoter and Brant are to be expected in late October, but this adult Brown Pelican was much more of a surprise [photo by Mike Crewe]. 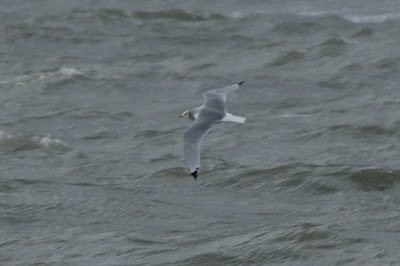 Another typically northern bird caught up in this strange weather pattern, this is one of four Black-legged Kittiwakes that we logged today [photo by Mike Crewe]. 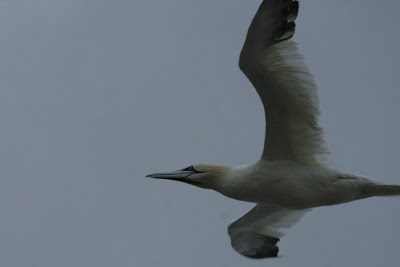 With birds flying close to the coast to seek at least some shelter from the worst of the winds, post-storm seawatches can provide some great views of great birds. This Northern Gannet was so close over my head that this uncropped picture shows that I couldn't fit it all into the picture [photo by Mike Crewe]. 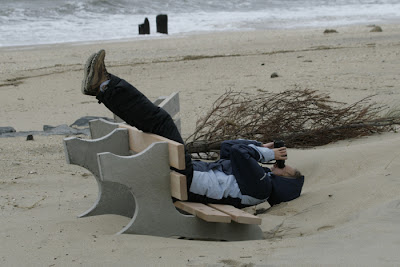 How to deal with such close birds? Well, Tiffany Kersten felt she had the answer! [photo by Mike Crewe] 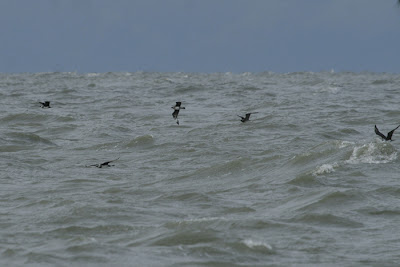 A great range of birds flew out of Delaware Bay today, the highlights for us being Band-rumped Storm-petrel and Cory's Shearwater, while others reported Sabine's Gull and Sooty Tern from much further up at Philadelphia. But the whole show was to be dominated by just one species - Pomarine Jaeger. Finding just one of these birds in Cape May is a notable achievement, but our day ended with a total count of 148 jaegers, the vast majority of which were Pomarines (with just a handful of Parasitics - I await Sam Galick's final tally for the day). It really was spectacular to see these birds coming through in groups of up to a dozen birds [photo by Mike Crewe]. 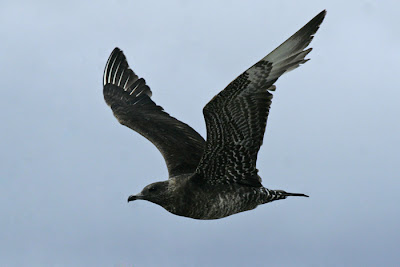 But for most of us, the afternoon Pomarine Jaegers that started cutting right along the beach front were truly awesome and provided for some once-in-a-lifetime photo opportunities. The strongly-checkered underwing suggests that this is a second calendar year bird and it shows nicely the white patch on the primary wing coverts which is a good ID feature to tell it from Parasitic Jaeger [photo by Mike Crewe].

Cape May Point was still closed to non-residents today, with barricades at Bayshore Road and Broadway, but these had been removed by nightfall and it seems likely that the area will be open on Wednesday. If you are venturing down to Cape May Point, please be aware of possible access restrictions and take local advice at the time. The Northwood Center had power and was undamaged by the storm when I visited it today, so we do plan to be back to business as usual as soon as possible. Stay safe and have good birding!
Posted by Mike Crewe at 11:55 PM