If you were at Cape May Point State Park this Saturday and thought that the Hawkwatch Platform was even more 'happening' than usual, you would be right, for Saturday was the day of Cape May's official Big Sit. I am sure that most people will know by now, but the Big Sit is a wonderful, non-competitive (ie, no prizes given!!) event that takes place on the second weekend in October each year and the aim is very simple - to record as many species as possible from a single location on a single date. I say non-competitive - and it is - but, inevitably, there is a certain honor and pride attached and, well, you know, that competitive edge just sneaks in a little! This year, event organizers allowed Big Sits to take place on either the Saturday or the Sunday, giving a certain flexibility to work around possible bad weather. Once again, Tom Reed took the bull by the horns and got us scheduled for Saturday October 13th - and what a fabulous day it turned out to be!

As ever, the mighty stalwarts of Cape May birding were out right on the beat of Midnight and it is wth much gratitude that we thank Cape May Point State Park for allowing us to be present on the Hawkwatch Platform outside of regular hours. With the count being organized slightly later than usual this year (I guess perhaps because the first weekend fell so close to the start of the month?) we were a little hard pressed to find warblers, but as it turned out, the early morning movement of late-season birds such as American Pipits, Rusty Blackbirds, Eastern Meadowlarks and the like, made up for some of the potential shortfall.

In all, some 50 people contributed to a wonderful day - and the weather was pretty wonderful too, after a mighty chilly start - and it is impossible to name all those who helped even by simply offering encouragement and keeping the atmosphere jolly. But we have to recognize the awesome staying power of the 'hardcore' of Cape May's birders that were present for most of the 19 hours that were covered this year: Tom Reed, Sam Galick, Michael O'Brien, Chris Brown, Glen Davis, Tiffany Kersten, Dave Hadeen, Vince Elia, Don Freiday, Scott Whittle, as well as many more who were there when they could be - including Cape May's very own prodigal son, Doug Gochfeld, who returned to his adopted homeland to be part of the main event! Especially awesome this year was the food, provided by so many people, but I have to single out the wonderful contributions of burgers and hot dogs by Lisa Ryan and Chris Marks (and barbecued on the spot by Lisa, Chris, Catherine Busch and others) and also the fabulous chilli provided by Libby Errickson and Alyssia Church that rounded off the day and materialized right on sundown as 27 Black-crowned Night Herons were rising out of the marsh and heading out over the bay. 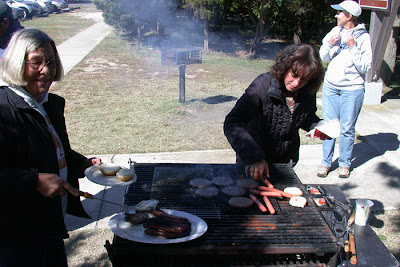 The Big Sit is as much about the people as it is about the birds. The new barbecue stand installed by the state park this summer right next to the Hawkwatch Platform gets put to perfect use here by Chris Marks and Lisa Ryan - thank you ladies! [Photo by Mike Crewe] 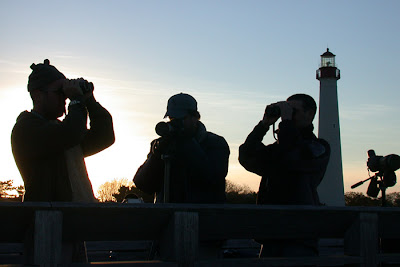 From long before sunrise to well after sunset, Cape May's birders kept vigil in the state park. Here, Glen Davis, Michael O'Brien and Doug Gochfeld deny themselves views of a perfect Cape May sunset behind the lighthouse in favor of finding just one more bird for the list [photo by Mike Crewe].

And the final score? Well in the end, 133 species of birds were logged on the day sheet. Here's the full list posted to eBird:

The Big Sit is a major event which was started by the New Haven Bird Club, Connecticut and is hosted by Bird Watchers' Digest and sponsored by Swarovski Optik.