Warblers, sparrows and visitors from afar...

As September gives way to October, attention turns from warblers to sparrows, but at the moment, we have a nice crossover period, where both groups of birds meet. There's always the latecomer who is lagging behind the main push of its own species and this past few days has already provided me with a Philadelphia Vireo at the Northwood Center (3rd) and both Connecticut and Hooded Warblers in my own yard on October 1st (I know, I know, just showing off now!). This morning's walk at Cape May Point State Park took place under heavy gray skies, with the top of the lighthouse shrouded in fog and at first we struggled to find birds to look at. Indeed, the burn pile that has been going through something of a 'Patagonia Picnic Table' effect lately was completely birdless - not even a Palm Warbler. But the crossover period became apparent as we continued round the boardwalk trail and found busy parties of Gray Catbirds and Northern Flickers feeding on the Blackgum berries, two Savannah Sparrows by the plover ponds and a surprise Lark Sparrow in the dead tree by the metal bridge on the blue/yellow trail. 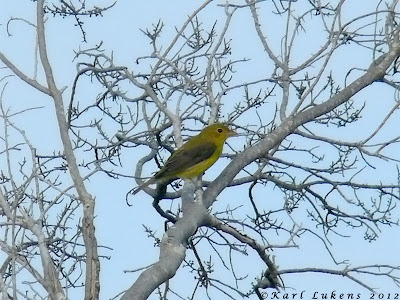 Scarlet Tanagers - albeit in their not-so-scarlet fall dress - have been very visible at many locations lately and there have been some good counts through Higbee Beach at the Morning Flight. This bird was on the Meadows walk on Monday morning [photo by Karl Lukens]. 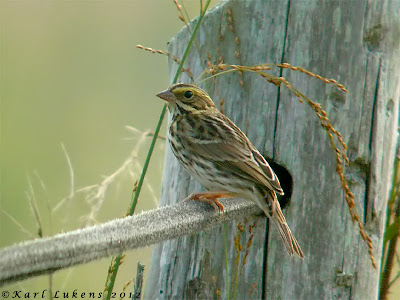 Savannah Sparrows are moving through Cape May now and, as October progresses, more sparrow species can be expected to appear. If you still find this group a head-scratcher, you might like to try our Sparrow workshop, coming up on October 20-21st [photo by Karl Lukens]. 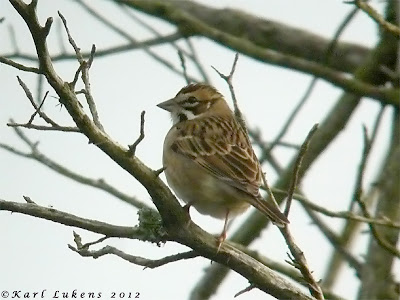 This wonderfully obliging Lark Sparrow sat and posed for us for as long as we cared to look at it in the state park this morning [photo by Karl Lukens].

Another treat in the state park was a group of four Pine Siskins hanging out with some American Goldfinches in a Blackgum tree [photo by Karl Lukens].

Visitors from afar have included the well-watched Say's Phoebe which - unfortunately, though typically - proved to be a single-day bird, a report of a Western Kingbird in the state park on 2nd and a Rufous Hummingbird at a feeder on Stevens Street. Perhaps most surprisingly for their untimeliness have been reports of an Eared Grebe, photographed in the back bay off Ocean City and an intriguing report of a Black-legged Kittiwake from Cape May beachfront, for which we await further details. 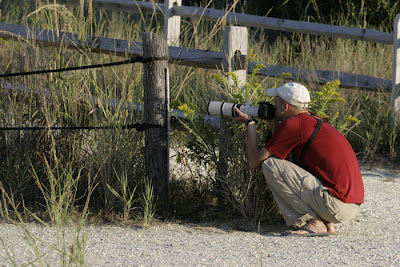 The appearance of a rarity brings the cameras out and to me, it soon becomes apparent that fieldcraft is sadly becoming a thing of the past. However, the recent Say's Phoebe gave several of us the chance to use the landscape to get closer to the bird - here, Cameron Rutt uses Ninja training to make himself less visible to the bird! [Photo by Mike Crewe]. 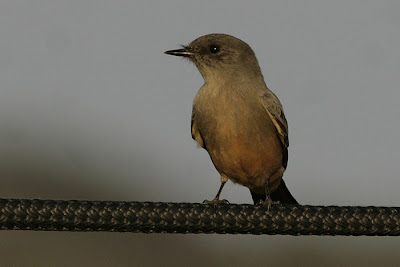 With the Say's Phoebe being tweaked along the plover pond fence by advancing birders, several of us ducked down in the shadows of the brush pile and waited. With the sun in our favor, the phoebe gradually came our way and posed beautifully on the rope fence for us [photo by Mike Crewe]. 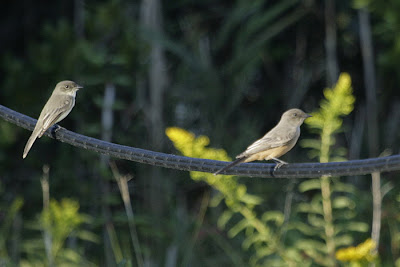 Two phoebes, one fence... sometimes you just get lucky, no skill involved! While we were watching the Say's Phoebe, an Eastern Phoebe came and joined it - east meets west at Cape May! [Photo by Mike Crewe]

It looks like being an early season for some of the northern species that are prone to occasional wanderings in years when food supplies dry up; Red-breasted Nuthatches have been well-reported on our blog in recent weeks and still can be seen on most streets around Cape May Point at the moment. Now, Pine Siskins and Purple Finches are looking like following suit and it was nice to see four Pine Siskins that sat up for great scope views in the state park this morning.
Posted by Mike Crewe at 3:22 PM