A postscript to crossbills, and some recent birds

My recent crossbill post generated a number of emails to me from blog readers, the bulk of which related to the legality - or otherwise - of collecting dead birds, so I feel I should clarify this. Most people who contacted me had fallen foul of finding a dead owl or bird of similar interest and trying to get it stuffed and mounted, only to find that this wasn't possible. The law that protects migratory birds actually protects pretty much everything other than species recognized as legitimate hunting quarry. This is essentially to stop anyone setting up an unsustainable industry of trading in dead birds and if it covers all of us, then it removes any possible loopholes that someone might try and wriggle through.

There is an obvious need for such places as museums to get round this if they want to continue having specimens for scientific research and this is covered by a permit system, governed by the US Fish & Wildlife Service. We have one of these permits in place at the Northwood Center, so we are allowed to temporarily hold dead birds that have been legally collected for a short time, before forwarding them to a licensed faculty. For more information on this from US Fish & Wildlife, click here.

Early December is providing us with a fine extension to November's good birding; the two Redheads continue on Bunker Pond, the Western Grebe continues in Cape May Harbor (best viewed from Delaware Avenue) and a late Osprey was reported several times from the Reeds Beach area. Common Redpolls remain elusive, but Tom Reed again had one at his Reeds beach feeder on 7th and a Vesper Sparrow was nearby the same day. Birds moving offshore are always tricky to catch up with, but one or two Razorbills continue to be reported - mostly from the Avalon Seawatch but Michael O'Brien also pulled one out of the bag at the 2nd Avenue jetty in Cape May on 7th, where a good loon and scoter movement was also taking place. Another King Eider flew south at Avalon on 7th and Chris Vogel found a male Common Teal at the Coastguard Ponds at Two-mile Beach the same day.

Recent news this morning includes two Orange-crowned Warblers and two Baltimore Orioles in the state park, by the yellow trail bridge, and a late Blue-gray Gnatcatcher on Oxford Avenue, here at the point. 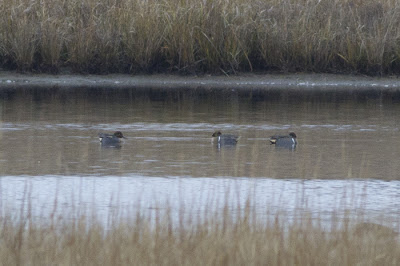 Male Common Teal (left) at the Coastguard Ponds, December 7th. Note the lack of a vertical white stripe on the breast side. This bird doesn't yet have a full horizontal white line on the tertials so if you go looking, beware of male Green-winged Teals still in molt which may not yet have a full vertical line on the breast side. If you get lucky with a closer view, the head patterns are subtly different too [photo by Sam Galick]. 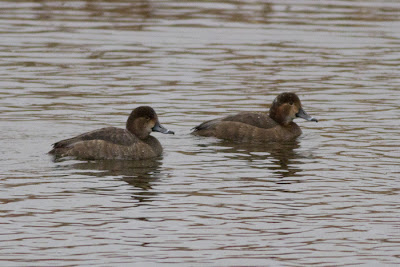 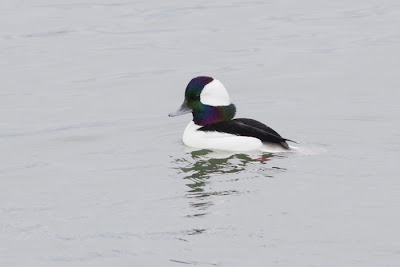 A common wintering bird with us, but still a great sight and close up views like this reveal the wonderful colors in the head feathers of a male Bufflehead [photo by Sam Galick]. 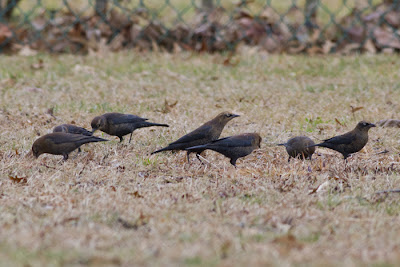 Now that winter flocks of Common Grackles are roaming the county, check through them for other species. Here are just a few of the 80 or so Rusty Blackbirds that are currently in a grackle flock roaming Villas - here seen on Maryland Avenue [photo by Sam Galick].
Posted by Mike Crewe at 11:02 AM