What we saw, what we missed...

What we saw...
Saturday was the day of our annual trip to Barnegat Light and, despite the best efforts of Hurricane Sandy, it came together perfectly. At the state park, the beach has already started to re-profile itself and, but for a lot of sand overtopping the dune vegetation, things appeared to be getting back to normal there - the most obvious missing item was the navigation tower at the far end of the stone jetty.

The sun shone all morning for us - despite fog banks to the north and south - and we enjoyed some great birding. Highlights included a whole army of Bonaparte's Gulls feeding in the inlet, two Forster's Terns, a Royal Tern, two Brown Pelicans, two Marbled Godwits and a fly-over Iceland Gull. A Common Redpoll was a 'leader-only' during lunch - and of course, there were Harlequin Ducks! Here's some picture highlights:

Some of our group make their way down Barnegat Beach [photo by Megan Crewe]. 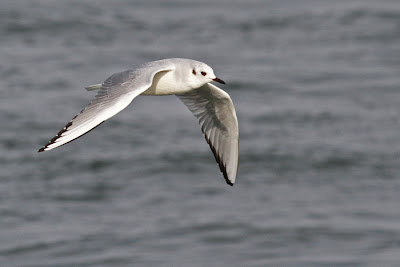 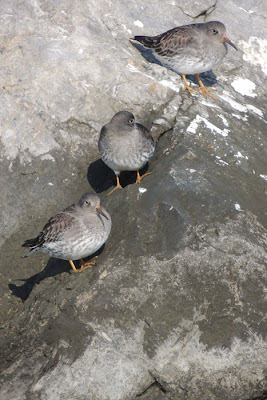 Purple Sandpipers are a key target bird for this walk and we were not disappointed. Despite much disturbance from a whole battalion of fishermen, several little groups of these birds found a place to rest along the stone jetty [photo by Megan Crewe].

Less expected on Barnegat's stone jetty was this duo of Red Knots - so different in winter plumage when compared to their rich spring red [photo by Mike Crewe]. 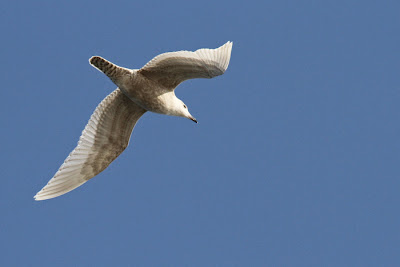 Fly-overs are always all too brief, and this Iceland Gull was missed by some of the group as it cruised right over our heads and out toward the beach [photo by Mike Crewe]. 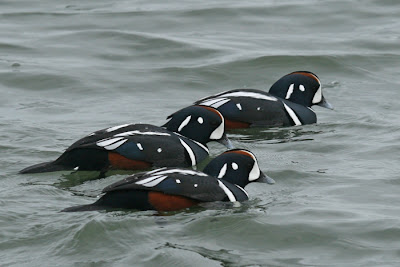 And of course, we saw Harlequin Ducks! Some 15 birds were enjoyed by the group, mostly with Common Eiders in the cove south of the jetty [photo by Mike Crewe].

...What we missed.
The problem with living somewhere like Cape May is that you just can't go away for five minutes for fear of missing something! While some of us were enjoying the best that Barnegat had to offer, Steve Glynn was finding a Western Grebe in Cape May Harbor! As of yesterday, the Canvasback continued on the Plover Ponds and two Redheads were on Bunker Pond in the state park; Red Crossbills continue to roam the pines at Cape May Point and four White-winged Crossbills were reported from The Beanery. 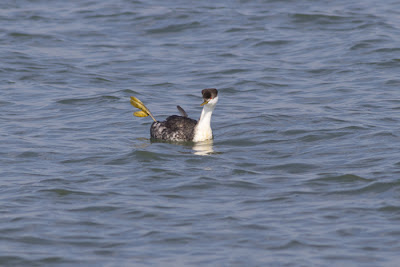 Western Grebe in Cape May Harbor, December 1st. This is the second for the year at Cape May and who knows, maybe the same bird returning to winter in Delaware Bay. Saturday, the bird was easily viewable from Delaware Avenue, near the nature Center of Cape May, but today there have been no reports so far - though the fog is just lifting as I write... [both photos by Sam Galick]. 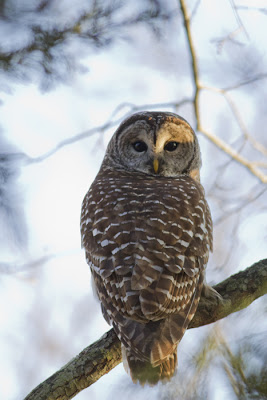 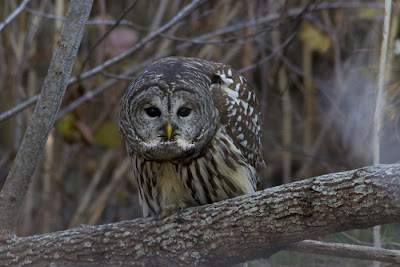 Sam Galick's run of awesome good fortune when it comes to the right combination of 'bird in front, camera in hand' continues. This Barred Owl was in the state park yesterday and offered some good photo opportunities. This is most likely to be a dispersing bird of the year, heading out to set up a territory of its own. Such birds are very vulnerable and many succumb to predators, cars and many other acts of misfortune. If you find such a bird, enjoy it, but please try to give it some space - hopefully it will still be where you found after you have finished looking at it [both photos by Sam Galick].
Posted by Mike Crewe at 11:51 AM