It was inevitable that we were going to get Dovekies at Cape May Point today. This might seem a pretty outrageous thing to say, given that this is a rare bird from land in New Jersey, and especially so at Cape May. However, we are going through some very strange weather trends this year, which all seem to be part of a continuing, longer-term trend of less predictable and seemingly more violent weather patterns. Water temperatures in the north-west Atlantic have been shown to be unseasonably high, especially off the north-east US, but even as far south as the Carolinas and we are currently witnessing an unprecedented southward movement of Razorbills - not just off north-eastern coastlines but way down into Florida, as far as the Keys and well into the Gulf Coast area. Such a good job of reporting on this has been done by eBird staff here, that I shan't repeat what has been written, but I strongly recommend following the link and reading the story so far.

With heavy rain overnight and associated windy conditions, it seemed likely that seabirds would have been pushed into Delaware Bay overnight, so an intrepid team gathered at our favorite viewing point at Sunset Grille and braced against the winds. It wasn't long before birds started to come out of the bay and, as well as a good showing of Northern Gannets and Long-tailed Ducks, little black and white shapes began to appear not too far out and gradually morphed into Dovekies. Though I haven't heard the final count yet, when I left the scene the count was up to 29, with a smaller scattering of Razorbills further out. This figure included at least four birds seen sitting on the water and the count represents by far the highest ever recorded from shore in the county. Most previous counts around Cape May have been of single birds, the highest count being of 16 on the 1932 Christmas Bird Count. 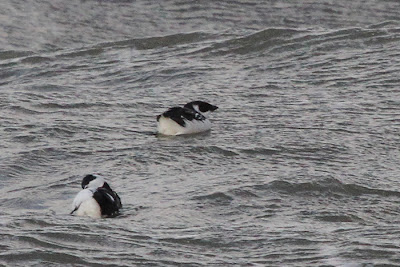 Windy weather, poor light and an inept photographer are not a good combination, but I did my best this morning on two of the Dovekies at Sunset Beach. In this shot from behind, notice the white flecks on the upperparts [photo by Mike Crewe]. 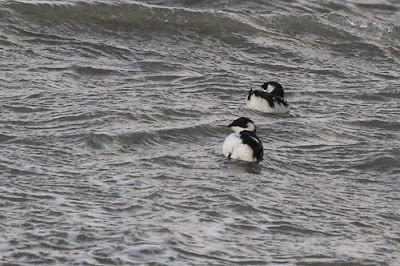 Another shot of the two swimming Dovekies; note the stubby, deep-based bill, as well as the extensive white patch which extends well up into the back of the face [photo by Mike Crewe]. 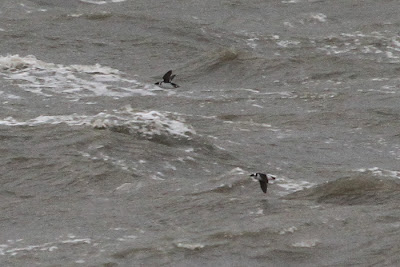 Two more Dovekies scuttle past the concrete ship. In flight, note the all dark underwing and very dumpy shape, both of which single them out from Razorbills. The thin black neck collar and extensive amount of white on the back of the face are useful too [photo by Mike Crewe].

Elsewhere in the region, the two Western Tanagers continue to show intermittently at Cape May Court House and the Townsend's Warbler continues to put in grudging views at Cape May Point State Park periodically. A Harlequin Duck was at the Two-mile Beach jetty on the north side of Cold Spring Inlet on 20th. Also this morning, small numbers of White-winged Scoters were passing out of the bay with Black and Surf Scoters. Interesting news from further afield includes a male Cape May Warbler coming to a feeder in Hunterdon County, while a remarkable number of butterfly sightings continue to be reported. Just two days ago, I saw three Red Admirals spiraling upward in what appeared to be a courtship flight, while December 18th provided no less than six butterfly species: Monarch, Questionmark, American and Painted Ladies, Orange Sulphur and Red Admiral. 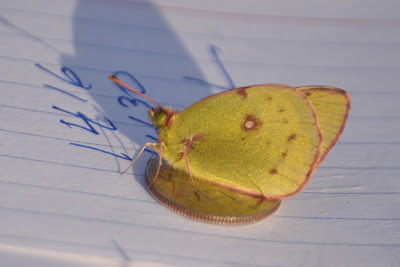 This remarkable Orange Sulphur was so small that it was photographed sitting on a dime! Butterflies  can often be smaller and/or darker in color than usual as a result of environmental conditions during pupation [photo by Will Kerling].
Posted by Mike Crewe at 4:48 PM