Ring out the old, ring in the new - in fine Cape May tradition, we started 2013 with our Kick Off Your Year List walk and turned up a great selection of birds. Our walk began at Cape May Point State Park with scoters, Long-tailed Ducks and Northern Gannets ferrying offshore and a great selection of ducks on the state park ponds, the best of which was the female Canvasback that has been around since last year. Two Great Blue Herons and a Great Egret were nice additions, as was a Belted Kingfisher and a smart male Red-breasted Merganser - the latter an unusual visitor to Bunker Pond. Bald Eagles are, of course, pretty much guaranteed here now, but it was still nice to see one of the resident pair, cruising along the back of Lighthouse Pond. Our walk took us around part of Cape May Point, where we added the male King Eider and some very obliging Red Crossbills to our list. Yard feeders added Carolina Chickadee, House Finch, Mourning Dove and several female Purple Finches, and brief glimpses were had of Downy and Red-bellied Woodpeckers.

After a welcome lunch and warm-up, we met up again at the Nature Center of Cape May for great views of the Western Grebe that now looks set to spend the winter with us in Cape May Harbor. Here too were Brant Geese, lots of Buffleheads, Ruddy Ducks, a close Common Loon and a very distant Boat-tailed Grackle. Winter afternoons are always all too short so we made a hasty visit to Two-mile Beach for American Black Ducks, Sanderlings and a Great Cormorant, then headed to Sunset Lake in Wildwood, where a feeding party of Greater Scaup and two very close Horned Grebes were our reward. Our day was nicely rounded off with a last minute visit to Sunset Beach, where at least four Merlins and a male Northern Harrier were seen before they headed for their night roost.

It was a cold and rather gray day, but we ended with a total of 77 species - certainly a good start to the year - so how about we see how many species we can notch up on CMBO events this year? Come and join in and be part of the fun!! 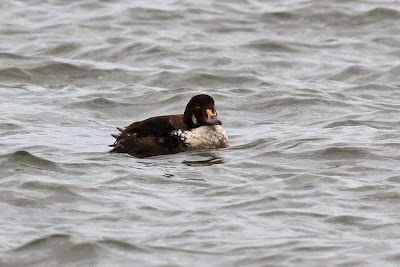 The immature male King Eider continues to hang out around the jetties off Cape May Point and can usually be found somewhere between St Mary's and St Peter's [photo by Mike Crewe]. 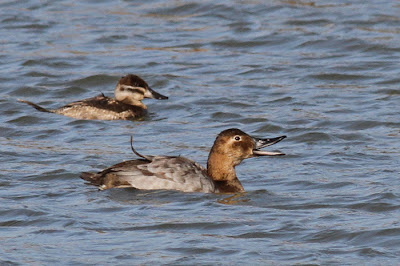 The female Canvasback was on Bunker Pond on Christmas Day, but on January 1st had returned to the third Plover Pond - to date its favorite location [photo by Mike Crewe]. 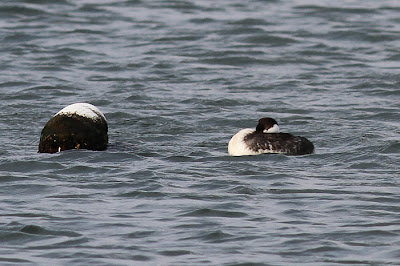 In case you haven't worked it out yet... the Western Grebe continues to hold a secret tryst with its favorite buoy in Cape May Harbor, just a little way along from the Nature Center of Cape May. Here's a quick guide to help you locate it - bouys tend to be white above, while grebes are white below!! [Photo by Mike Crewe]
Posted by Mike Crewe at 3:21 PM