American Lady and other butterfly news

Talking to Will Kerling is always a great experience and a great way to get the old gray matter going on a cold day, since we always seem to pose each other questions for which we don't have an immediate answer. Will of course had been out looking for butterflies and, though this winter has not seen the amazing number of Orange Sulphurs that we saw last winter, the run of mild weather had been producing some interesting sightings. Very high on the list of these was a report of an American Snout in Belleplain State Forest recently and an American Lady, photographed by Sam Galick at Cape May Point State Park on January 19th and, it seems, representing the first-ever state record for this species for January.

Butterfly species have various strategies for surviving cold winters; some over winter as eggs, some as larvae, some as pupae and some as hibernating adults. Yet other species survive cold northern climes simply by heading south or - even more drastic - by allowing northerly individuals to perish and re-populating an area from the south each spring. Thinking about these various options, the most likely species you might expect to see during a relatively warm spell in winter are those that hibernate as adults; they simply need to be woken up by warmer temperatures and venture out to find something to eat. American Ladies fall in perhaps the next most likely category - those that perish in the north and repopulate from the south (though at least some seem to head south in the Fall too, so it's a kind of don't-put-all-your-eggs-in-one-basket species). Thus, Sam's American Lady seems most likely to have been a survivor from last year that hung on due to the mild winter we are having. Having said that, there are some obvious questions to ask, one of which might be - what has it been feeding on?

For Will, this last question brought to mind some recent observations he had made of Orange Sulphurs, which were hanging out around the fruits of Carolina Horsenettle (Solanum carolinense). This plant is a fairly common species of disturbed ground and recently abandoned fields and meadows and its little yellow 'cherries' are a familiar sight in such places. The fruits seem remarkably resilient and hang on well into winter, but they do eventually start to break down and it seems that butterflies may well turn to such resources for food when nectar from flowers is in short supply. American Lady is a Nymphalid or 'Brushfoot' and this group is well known for feeding on rotting fruit in the Fall. So, though there may be few flowers around during the winter, a few insects may survive in mild conditions if there are fruits around to support them. If you have any fruits around your yard, keep an eye out for four-winged visitors during mild spells - though I'm guessing Sam's lady may well have succumbed in the current run of sub-freezing temperatures... 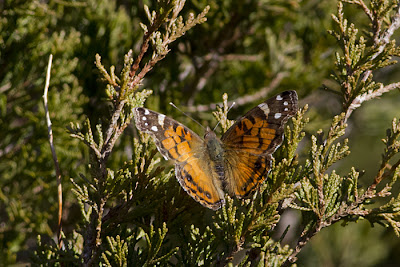