Last Sunday, the keener contingent among Cape May's birders were all aboard a boat, heading out into coastal waters to see if there were any remnants out there from the auk movements that took place in December. As it turned out, there were plenty of birds to be seen and all within some six miles or so of the coast. The trip took the group in a loop out of Cold Spring Inlet, circling back closer to the coast off Stone Harbor and Wildwood. Auks were the target birds and they certainly performed, with a total of 89 Razorbills counted, along with three Dovekies and a single Common Murre - the latter a real prize for any keen Cape May birder. I suspect more trips will take place in the near future so watch this space! Other birds of interest included 28 Red-throated Loons, eight Common Loons, 94 Northern Gannets, two Black-legged Kittiwakes and three Forster's Terns. 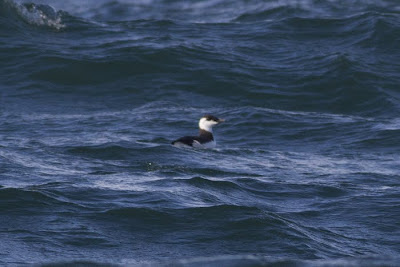 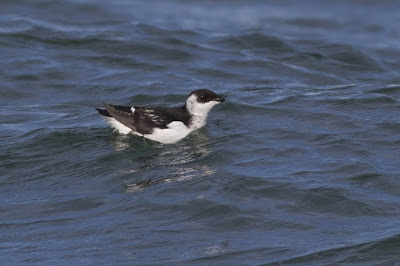 Dovekies are still out there for the finding; head for the coast if strong easterlies are forecast and you might find one from shore... [photo by Sam Galick]. 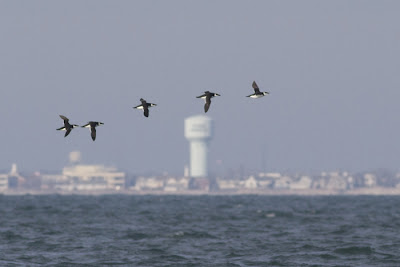 A party of five Razorbills fly by with the Stone Harbor water tower in the background [photo by Sam Galick]. 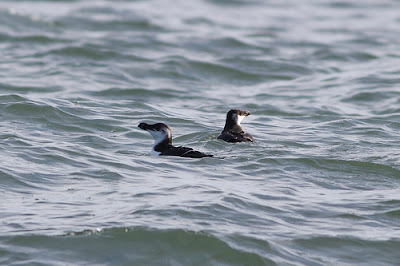 If you see two Razorbills together, you might be tempted to assume they are a pair, but the truth is likely to be quite different. The difference in bill size reveals this to be an adult (left) and first-winter (right) and that is more typically what you will see. In Razorbills and some other auks, the male tends the single young after it leaves the nest site at a relatively early age. The male will lead the youngster out to an area where the feeding is good and this perhaps saves the adult from having to make repeated, long commutes between good feeding grounds and the nest site. It is not unusual for the two to stay together for much of the first winter [photo by Sam Galick].
Posted by Mike Crewe at 3:42 PM