The (Mexican) Eagle Has Landed!

On Saturday, January 5th I received an email from Roland Scardino Jr, that he had seen a Crested Caracara on a treetop, near his house, in Estell Manor, Atlantic County. Now you would perhaps be forgiven for being a little sceptical of such a report - this being New Jersey and not somewhere much further south, but I was intrigued and I put the word out. Roland's brief details were nevertheless quite convincing and - here's the real clincher - there had been a Crested Caracara in New Jersey back on September, at West Windsor Township, just outside Trenton. Who knows, maybe it was the same bird. Though one or two people took a look around Estell Manor over the following days, there were no reports. That is, until Tink Bryant was heading north out of West Cape May towards the canal bridge this afternoon. "Is that an Osprey on that phone pole"? she asked her son; "No Mum" he replied, "It's a Mexican Eagle!" They teach these American kids good at school round here!!

So, the Crested Caracara seems to have finally made its way south as far as Cape May. It spent about an hour around the canal bridge, before heading off to the north, persued by local crows. Given the direction it headed, around 4:20PM, it's possible that it may have gone to roost at the regular vulture roost which is situated in trees right beside the Lower Township recycling depot on Rt 626, just opposite the east end of Academy Road. An early search tomorrow will hopefully reveal its whereabouts. (As I write this, Richard Crossley just reported the bird at this very spot - just after 5PM.) 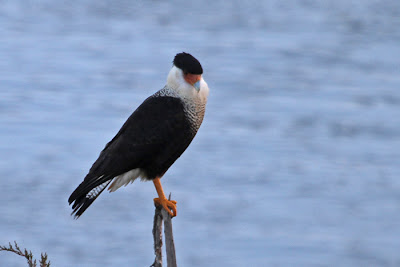 I never imagined seeing a shiny bright, adult Crested Caracara, with the Cape May Canal as a backdrop! The intense color of the bare parts and heavy black tones to the plumage indicate that this is an adult bird [photo by Mike Crewe]. 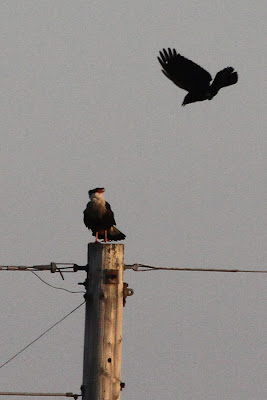 Our visitor was not so popular with the local American Crows... [photo by Mike Crewe]. 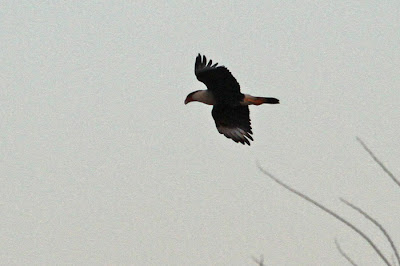 In flight, caracaras are distinctive, having a rather heavy head and bill and with long, straight wings and a long tail, giving the bird the look of a flying cross. Note the white wing patches in the wings too [photo by Mike Crewe].

While Crested Caracara may seem a peculiarly exotic bird to turn up in the wild here - and they are certainly kept in captivity - there has been two previous records from New Jersey, though neither has yet been fully accepted as wild by the New Jersey Birds Records Committee. However, Massachusetts has two accepted records from 1999 and 2007 so maybe things are about to change... Of interest to anyone researching extralimital records of this species, there are two Ontario records - one way back in 1893, which must surely have good credibility.

Whether wild or not, this is a great bird to see - even Dave our UPS guy stopped for a quick look this afternoon! I know where Cape May's birders are going to be first thing tomorrow morning!!

Oh, and why Mexican Eagle? Well, it has long been suggested that the eagle on Mexico's crest and coat of arms is a Crested Caracara, based mostly on the fact that the bird is catching a snake (typical caracara behavior). However, the eagle on the crest is usually portrayed colored brown and has feathered legs, while the base of its bill is yellow, not orange. Thus, the proud Mexican emblem is more likely to be a Golden Eagle - though why it's toying with a snake is anyone's guess!
Posted by Mike Crewe at 5:20 PM