A Great Start to the Year...

Though it feels pretty darn cold at Cape May at the moment, with temperatures ranging from 27F to 37F over the past 24 hours, it's fair to say that - so far at least - we are having a very mild winter and this is certainly being reflected in the birds that have been found over the last couple of days. I ran into Jimmy Dowdell at the state park yesterday and learned that he had found no less than five species of warbler that morning, a sure sign that there is insect food still to be found along the wetland edges. The Townsend's Warbler is still being seen intermittently, but is highly mobile and there is no foolproof way to be sure of connecting with it. It ranges from Yale Avenue in Cape May Point to the state park and, within the park, it may be found anywhere from the entrance/parking lot area right through to the 'back gate' which most people are familiar with at the far end of the longest section of boardwalk. The other warblers being seen include Orange-crowned, Nashville and Yellow-rumped Warblers and a Common Yellowthroat. Yellow-breasted Chat was also reported from West Cape May on December 23rd and a very unexpected Blackpoll Warbler was reported by Don Freiday from Cape May Point on December 24th. Other unseasonable birds have included the two Western Tanagers which continue in Cape May Court House, a Swainson's Thrush, found by Rob Fanning at Cape May Point on 24th and a Black Skimmer past St Peter's on December 23rd. There are quite good numbers of Fox Sparrows rummaging around in the leaf litter in the drier parts of the state park, as well as Song, Savannah, White-throated and Field Sparrows there, while Tom Reed reported an American Tree Sparrow in his yard on Reeds Beach Road today - the first I have heard of this winter I think.

A White-eyed Vireo was a remarkable find in the state park on December 22nd and may well still be in the area as it has been elusive but seen several times since then, to January 1st at least. A Northern Shrike was in Del Haven on Christmas Day, last being reported on 28th and a relic of the Evening Grosbeak invasion involved a single bird briefly in Bottle Creek Drive, Cold Spring on December 31st. The Dovekie invasion fizzled out a little - though there may yet be more if the weather turns rough again - but singles were noted at the ferry terminal on 27th and at Stone Harbor Point on 31st. It may well be worth looking out for Iceland Gulls, as recent sightings have included singles at Shellbay Landing on December 27th, south past Del Haven on January 1st and on the beach at Cape May Point on 2nd. The latter bird was watched flying away up the bayshore, carrying on north past Sunset Beach at least. All sightings involved first-winter birds. Finally, a Yellow-headed Blackbird was seen briefly in a mobile grackle/blackbird flock along Bayshore Road near The Beanery on December 30th and should certainly be looked for. Oh and both Red and White-winged Crossbills and Red-breasted and White-breasted Nuthatches seem to be permanent fixtures around the point, for now at least, so keep an ear and an eye out for these. 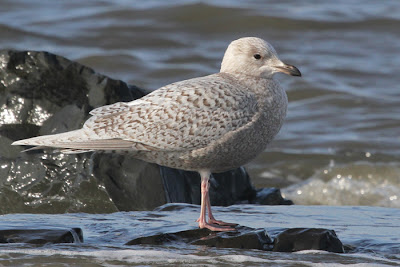 First-winter Iceland Gull at Cape May Point today. Gentle-faced, kindly-looking gulls that are always a really special find. Note the mostly dark bill with just a smudgy splash of pink at the base and the subtle markings on the primary feathers [photo by Mike Crewe]. 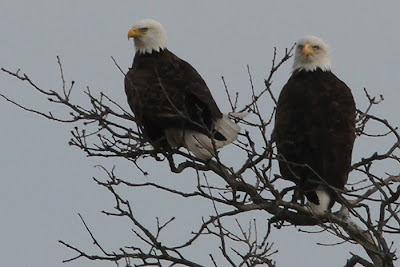 What a place! One thing we were short of at Cape May for a long time was resident eagles. But now we have them and I forfeited the chance of several nice 'year ticks' before work this morning when I chose to get up close and personal with our local 'south of the canal' pair. These two were sitting in a small oak which was barely big enough to support their weight at the state park and were just asking to be photographed. Though the relative body angles make judging size difference tricky, the bigger head and bill of the bird on the right marks it out as the female [photo by Mike Crewe].
Posted by Mike Crewe at 8:06 PM