Of all the obstructions that the weather can throw in the way of our birding enjoyment, I guess fog is the most successful when it comes to making life difficult! Windy days can be really annoying as you wrestle to hold optics still and anything smaller than a swan hides in the undergrowth; rainy days can be frustrating, but can often be beaten by using the car as a mobile blind. But fog? Well, I guess you can listen to stuff!

We had a foggy weekend this past Saturday and Sunday (followed by three days of drippy rain) but, despite this, we nevertheless had a pretty successful two-day workshop, looking at whatever we could find during breaks in the weather. The fog put paid to our usual schedule of studying wintering ducks, cormorants, gulls and the like, but Cape May came good with a great selection of birds to enjoy. Duck numbers remain good on the freshwater ponds around the point and we were able to add a freshly arrived male Canvasback to our lists on Bunker Pond. The two male Blue-winged Teal seem also to be hanging around, as is the first-winter male King Eider off St Mary's and the Western Grebe in Cape May Harbor. In the state park, Nashville and Townsend's Warblers continue (though elusive) and a Pine Warbler was seen on 12th. A Yellow-breasted Chat was on Bayshore Road by The Beanery on 13th. Both House and Winter Wrens are also around - the former favoring the area by the brown gate along the northern side of the property. Occasional reports of Baltimore Orioles have come in from various locations and I'm told that the Western Tanager continues to visit sapsucker holes on Hand Avenue in Cape May Court House - though personally I have so far been five times now and still not seen it!! A juvenile Northern Goshawk continues to terrorize birds in the state park though, as always with this species, remains amazingly elusive and hard to spot. On Sunday, we did manage good views of it as it flew low over the reeds on the north side of Bunker Pond and disappeared into a stand of cedars, never to be seen again!

Red Crossbills look settled around Cape May Point for now (they should start breeding soon if they are going to this year) but there are occasional reports from elsewhere, including Cox Hall Creek WMA and Jake's Landing. White-winged Crossbills seem mostly to have passed through, but one or two are still to be found, though mostly on the move it seems. A single Evening Grosbeak was noted flying over Coral Avenue on Saturday morning - sadly they didn't seem to want to hang out for photos at our feeders!

The Crested Caracara was - to my knowledge at least - last reported on Sunday 13th, hanging around the Lower Township Public Works unit on Seashore Road with Black Vultures. Interestingly, a Crested Caracara was reported from North Maple Avenue, New Gretna, Burlington County and may perhaps be the same bird. Though local reports suggest that the bird has been at New Gretna for "some months" it is possible that the bird flew to Cape May for a few days and returned northward (perhaps to escape the fog!!)

Beyond the magnetic draw of Cape May Point, other reports have included up to 70 Western Sandpipers, 10 Red Knot, 10 Semipalmated Plovers and a Long-billed Dowitcher in the Stone Harbor/Nummy's Island area, a Lesser Yellowlegs and the three saltmarsh sparrows (Seaside, Nelson's and Saltmarsh) at Jake's Landing and two Sandhill Cranes on Percy Blew Road in Cumberland County. 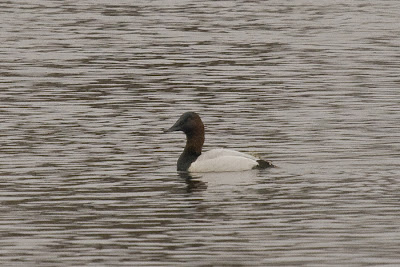 This male Canvasback was a nice addition to the ducks on Bunker Pond for our Winter Warmers workshop on 12th [photo by Gordon Rigby]. 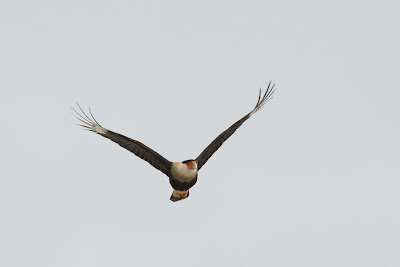 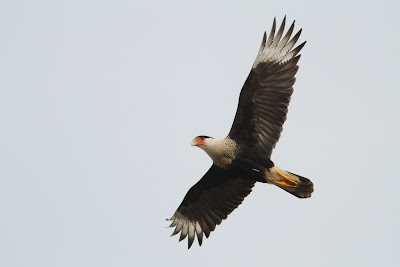 Away on a wing and a prayer! The Crested Caracara was hard to pin down this weekend because of the weather, but a break in the fog early afternoon on Saturday allowed for good photo opportunities, as seen in these two great shots by Tom Johnson.
Posted by Mike Crewe at 12:16 PM