I was out preparing for our Winter Warmers workshop today, checking a few of the less-visited spots around Cape May to see what gems were lurking out there and lining up some goodies for next weekend's two-day winter birding extravaganza. For me, there's something special about those birds that can tough out a northern winter, while being small enough to fit in your hand, and few birds seem to fit the bill as well as wintering shorebirds. While we don thermals and wrap up in extra hats, gloves and scarves, wintering birds get by with exactly the same number of feathers they wear in summer, which strikes me as pretty amazing.

A small group of us checked out some great places today and confirmed what we perhaps already knew - Cape May is bristling with good winter birds right now. At Cape May Point State Park, ducks still fill the ponds and the relatively mild winter we are enjoying meant that we enjoyed some pretty surprising birds there; a Nashville Warbler, at least four Orange-crowned Warblers, a Townsend's Warbler and a White-eyed Vireo were all showing well today and were all hang-overs from the back end of 2012; I hear that the wintering Common Yellowthroat was seen today too. A Virginia Rail showed well briefly in the morning, while nearby, the wintering Blue-gray Gnatcatcher was reported from the side yard of 304 Oxford Avenue yesterday. The two Collared Doves continue - but remain a little elusive - around Harvard/ Whilldin/ Lincoln Avenues and an Evening Grosbeak flew all too briefly over Lake Lily on 5th. While Cape May Point remains the best place to look for wintering Red and White-winged Crossbills, a group of 8-10 White-wings was seen just north of Norbury's Landing on the bayshore today, so crossbills are certainly worth looking for elsewhere. Our wanderings in search of goodies for the workshop produced a fine suite of great Cape May winter birds, all under a cloudless sky (a day so glorious that I got my first butterfly of the year - a Red Admiral!). Searching shorebird habitats provided Western and Purple Sandpipers, Long-tailed Ducks and Common Loons were plentiful and we notched up at least five Great Cormorants. Among large groups of Greater Scaup and Buffleheads, the bayshore side of the peninsula gave us a couple of female Common Goldeneye, with the persistent barking of Snow Geese as a wonderful background sound to a glorious winter sunset. Come and join us next weekend for a great blend of learning and pure, unadulterated enjoyment of some great winter birding. 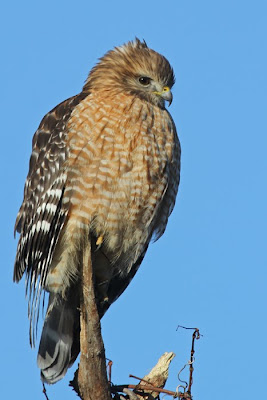 A great start to any day, this adult Red-shouldered Hawk has brightened my drive to work for the past two mornings; Red-shoulders are rare breeders in Cape May County, but are more common as a migrant and wintering species. Many of the wintering birds are lovely, rusty-marked birds like this one [photo by Mike Crewe]. 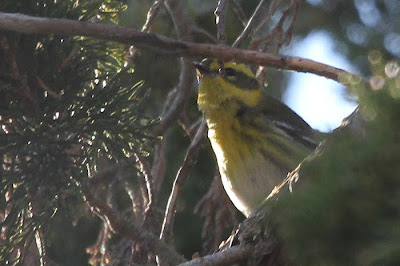 Not the best of pictures, but this quick grab in the shade of a stand of red cedars shows that the Townsend's Warbler is still hanging out in the state park, though it remains rather elusive and hard to track down [photo by Mike Crewe]. 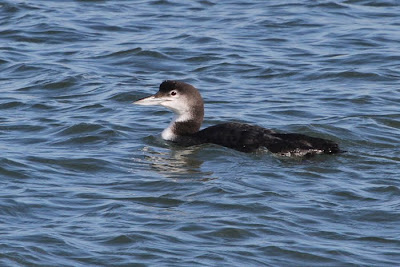 Common Loons are plentiful around the coasts and backbays at the moment, offering great opportunities to sort them out from nearby Red-throated Loons [photo by Mike Crewe]. 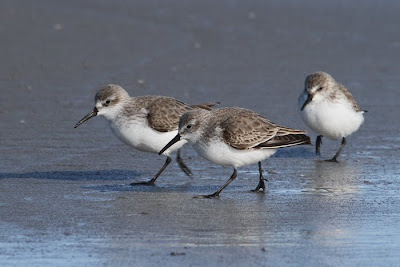 Always a nice find among the large flocks of Dunlin and Sanderling on the beaches, Western Sandpiper can be a tricky species to find at times. These three were a real highlight of a sunny day today [photo by Mike Crewe].
Posted by Mike Crewe at 9:16 PM