So what's with Crested Caracaras in New Jersey this winter? One bird turning up and wandering around for a bit is interesting; could be a wild bird, they've been known to wander before. But it just got a little crazy. My emails are backing up with news of caracara sightings in three different parts of the state right now and it's getting pretty difficult to not to start thinking in a different direction...

Just this week, news has filtered in to me of caracara sightings from Cape May (Cape May Co.), New Gretna (Burlington Co.), Estell Manor (Atlantic Co.) and Woodstown (Salem Co.). At first, the few sightings could just about be written off as a single, wide-ranging individual, perhaps locked in with a wandering band of Black Vultures. However, as more sightings come in and dates look like they are starting to clash, it looks as though we may well have two and maybe even three birds in New Jersey.

To try and resolve this, I would like to encourage anyone who believes they have seen a Crested Caracara in New Jersey in the last three months or so - and especially this month - to contact us and let us know; ideally we would like to know location (as precise as possible) and date. All details will be passed on to the New Jersey Birds Records Committee. Of course, we would be really keen to receive digital photos of your birds, as there may be subtle plumage differences visible which would be of great value in assessing how many birds may be involved.

While we all get very excited, of course, at the prospect of ticking this great bird off on our lists, I have to say that it is starting to look a little peculiar. Ideally, it would be nice to see a pattern of sightings of wandering birds appearing on eBird, with sightings starting, for example, some time last summer and showing birds moving north up the mid-west, east through the Great Lakes region then turning up on the East Coast in the Fall. Unfortunately, all we currently get is an isolated rash of sightings in New Jersey and none anywhere else; you have to go way back to 2011 to get a bird in Colorado in July, then one in Kansas in August. Could this one bird really have headed our way and stayed hidden until September 2012?

But then, what else is happening? None of the sightings have involved banded birds. Were these an illegal shipment that got released somewhere locally? Or did they escape from a licensed owner during one of the many storm events that we have experienced over the past 12 months? Maybe we will never know, but adding as many confirmed sightings as possible to the map may help to understand how many birds are involved, and what they are doing. If you want to contact me about this subject, please feel free to do so, using the link in the left hand column of this page. 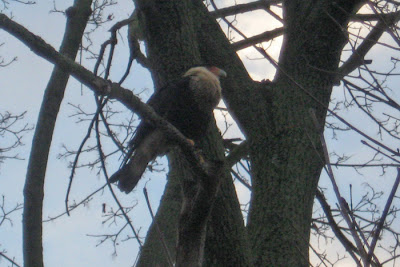 Crested Caracara photographed this morning (17th) on Rt 603, Alloway-Woodstown Road, Salem Co. Poor light at this time of year may not produce the best of portrait shots, but it is very easy to see that this is certainly a Crested Caracara - but is it the Cape May bird? Or the New Gretna bird?! Apparently, a caracara was seen in the Woodstown area on January 4th, so this bird may have been in Salem County for some time [photo by Becky Clanton]. 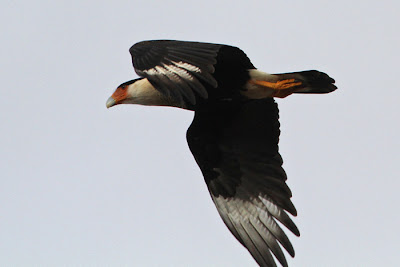 In flight, Crested Caracara shows long wings and a heavy head, with a distinctive distribution of white on the neck, tail and in the primary bases, with the rest of the bird being dark. On the ground they can look chicken- or turkey-like and are thus more like vultures than other birds of prey in that respect. Also like vultures, they regularly forage for road kill - so keep a camera in the car, a picture speaks a thousand words! This is the Cape May bird, photographed on 12th [photo by Mike Crewe]. 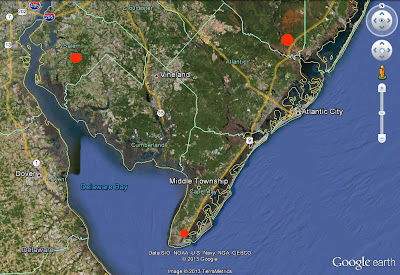 Google map of South Jersey. The red spots show the three recent caracara locations that we know of - let us know of your South Jersey sightings, wherever they may have been made!
Posted by Mike Crewe at 4:59 PM