Glen Davis started his day well today with a Townsend's Warbler in his side yard on Yale Avenue, Cape May Point. The bird was present for a little under an hour before disappearing between the houses to the north. Mid-afternoon, Megan Crewe reported it in the cedars near the North Pavilion, at the state park parking lot. This represents only the second fully documented Townsend's Warbler for Cape May County, the previous being at The Beanery on November 11th, 1988. 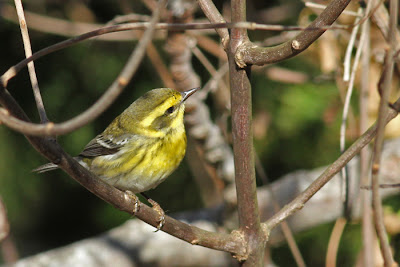 Townsend's Warbler at Cape May Point today. Michael O'Brien managed good looks at the wing of this bird and logged it as a first-winter female; this species is similar to Black-throated Green Warbler, but is yellower underneath and has darker ear coverts [photo by Mike Crewe].

Also at the point, Red Crossbills were very vocal and obvious this morning with - believe it or not! - four types being recorded. Previously recorded types 2, 3 and 10 were joined by a bird that was sound recorded by Michael O'Brien as it called from a pine on Yale Avenue and proved to be our first type 1 bird down here. A reasonable raptor flight took place this morning too with Red-tailed Hawks, and Black and Turkey Vultures being the main species involved. A Northern Goshawk was also present, while the male King Eider remained close to shore off St Mary's.
Posted by Mike Crewe at 5:03 PM