What are we going to do with Will Kerling? Every time he goes out looking for butterflies, he finds another tanager! Yes indeed, Will found his - and Cape May's - third Western Tanager of the year. Yesterday (18th), Will was at the intersection of Hand Avenue and Dias Creek Road in Cape May Court House, the place that he had found a male Western Tanager on December 5th. The bird had not been reported for some time, but Will again found the same bird. After taking some quick 'record' shots of the bird, it flew off to the south and Will immediately became aware of a second bird, flying away with the first. Though views were brief, he got the impression of another Western Tanager. Today, this was confirmed when Will returned to the site and found a bird which was clearly different in plumage to the first. Nick Kontonicolas was also at the site today and sent me a nice series of photos of this second bird (you can see pictures of the first bird here. 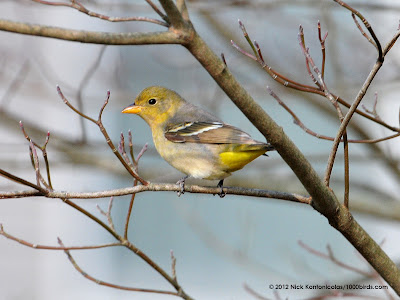 Western Tanager at Cape May Court House today. The narrow, white wingbars, solid gray back and generally dull underparts of this bird suggest to me that it is a first-winter female [photo by Nick Kontonicolas]

I managed to escape to Cape May Point briefly this morning and discovered a great abundance of winter birds (which hopefully bodes well for our Kick Off Your Year List event which takes place down here on January 1st). What is most intriguing at present is the relatively large number of auks appearing on the east coast now - some even reaching right down into Florida. Off the point today, an impressive count of at least 14 Razorbills was made, with little groups of twos and threes ferrying back and forth or sitting on the water; Tom Reed totalled 42 Razorbills off Avalon this morning, with a further 21 unidentified auks further out.  On 18th, the highlight at the point was a Dovekie which spent a brief period on the water right off the jetties, but gradually drifted further out into the bay until lost from view. Dovekie remains a very rare bird from land in Cape May and I kicked myself for not being around for that one! Rather a bizarre sight for Doug Gochfeld was the combination of a Monarch and a Razorbill flying past 2nd Avenue at the same time on 18th!

Black-legged Kittiwakes have featured strongly recently too, with one past 2nd Avenue on 18th, two off Avalon on 19th (plus a Laughing Gull) and at least two off St Mary's today, together with a nice influx of Forster's Terns and Bonaparte's Gulls. A Black-headed Gull was also seen off Avalon on 17th. The first-winter male King Eider continues to head up a great array of ducks wintering around the point right now, with a White-winged Scoter and several Common Eiders often accompanying it. This bird is most often to be found between St Mary's and St Peter's but on Sunday it wandered as far as the Cape May Canal jetty off Higbee Beach. The Townsend's Warbler was seen a couple of times back at 108 Yale Avenue today, but remains difficult to find with fewer people looking for it right now. The Western Grebe is remaining faithful to its favorite buoy in Cape May Harbor and, finally, crossbills remain scattered around Cape May Point with one or two Red Crossbills jipping overhead while I was out this morning and a report of 24 White-winged Crossbills on the move.

Away from birds, Tom Reed reported a Humpback Whale feeding close to the bar off Townsend's Inlet this morning, nicely viewable from the Avalon Seawatch.

This winter certainly looks like being a very interesting one here at the point with bird activity continuing to be centered around the state park and the dunes along the edge of the point itself. There's surely still some surprises out there somewhere!
Posted by Mike Crewe at 8:19 PM