Many years ago, before the enlightenment of our modern age (I guess we could debate that over a beer!) it was the trend to build up a collection of stuffed and mounted birds, ideally collected by one's own staff from one's own private estate - a very British thing, but not exclusively so. Gradually, such collections were donated over time to local museums and now form the backbone of many a display in glass-fronted cabinets. Fortunately, such behavior is (mostly) a thing of the past, but there is a strong need for museums to have preserved bird specimens for more than just a peep-show and that is for scientific research. For scientific purposes, birds are not mounted in 'life-like' poses, but prepared as a 'study skin'. Such skins are prepared pretty much as one might find them after death and as such can be conveniently stored in draws until they are needed. We have learned so much about birds from such collections that their value cannot be underestimated. Because of this, at CMBO we are happy to take in any dead birds that are found in good condition and forward them to the Academy of Natural Sciences in Philadelphia.

Where is this all leading? Well, a couple of weeks ago now, Chris Hajduk walked into the Northwood Center with five dead Red Crossbills, all found together and probably all killed by striking the same window (untimely ends through window and car strikes account for almost all of the birds that we get brought to us). Having got over the sadness of such an event, I immediately saw this as an opportunity to add to our knowledge of the Red Crossbills that are still passing through our area in large numbers. Here was an opportunity to learn things that cannot be learned in the field. So here's some thought-provoking pictures for you (if you are squeamish, imagine the birds are just sleeping...or skip on to the next post). 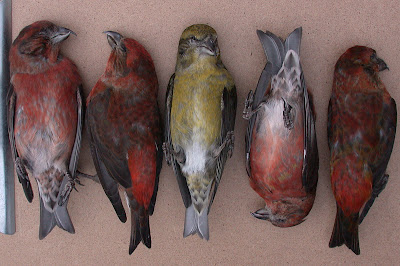 Five Red Crossbills from the Cape May Coastguard Unit. Males are red, females green, juveniles streaked. So clearly here we have four males and one female [photo by Mike Crewe]. 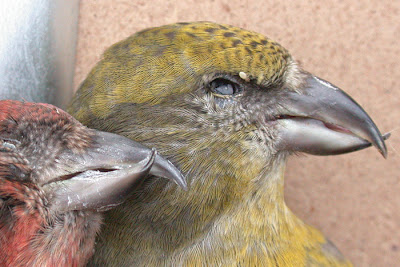 The famous crossed bill of a Red Crossbill is an amazing tool, evolved specially to deal with the seed-bearing cones of specific trees. What is intriguing is that crossbills can be left- or right-handed. Notice that the upper mandible on the male curves to the left of the lower mandible, while the female's goes to the right. In the first picture, we have three left- and two right-handed birds. Since cones tend to be symmetrical, it is unclear why there should be this difference in the birds, but perhaps it's just a random gene like our own left/right preferences [photo by Mike Crewe]. 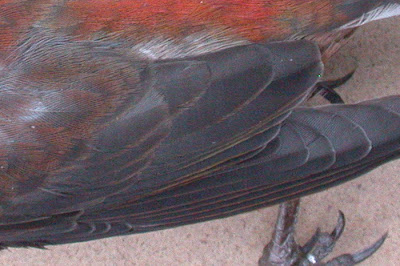 Trying to get to grips with crossbill molt strategies in five minutes proved pretty tricky for me! The main problem is that crossbills breed very early (often as early as January) and have just one molt a year, which throws all that I currently understand about songbird molt timings right out of the window! Most birds have two molts a year, usually one complete and one partial, roughly in late summer and late winter respectively; crossbills single molt is protracted and can take place progressively from April to November. However, if we look at the wing of this male, we see a set of feathers that all appear to be the same general color and with the same amount of wear. We could presume this to indicate it is an adult in at least its third year if we compare it with the next picture [photo by Mike Crewe]. 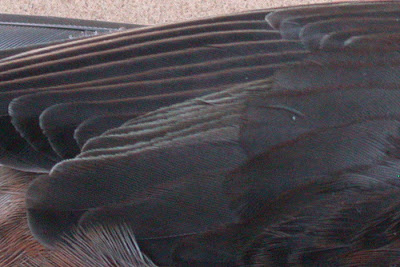 A look at the wing feathers of this male reveals a set of six inner secondaries that are clearly paler gray in color than the other feathers. These represent feathers that are older and are showing more fading and wear from environmental conditions. This retention of inner secondaries fits nicely the partial molt that crossbills tend to show in their second calendar year and this bird also showed one or two greenish feathers on the body (see the right hand two birds in the first picture) [photo by Mike Crewe].

One other thing I was able to do with these birds which we generally cannot do in the field was to take measurements. In previous posts I have referred to the various numbered 'types' of Red Crossbills which appear to form discrete breeding populations. So far, recordings made of passing birds at Cape May support the identification of them as 'type 3' birds, and this is further supported by these birds. Luckily, type 3 is typically smaller than most other types and, though there is much overlap in bill measurements between the crossbill types, these birds showed a wing length of 85mm to 89mm which falls right for type 3.

Compare the following two sonograms - sent to me by Sam Galick and made from recordings of Cape May birds - with those shown on the excellent article on crossbill types on eBird and see what you think. 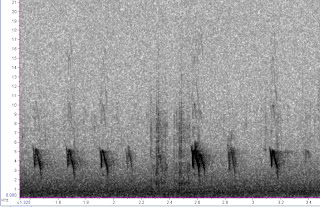 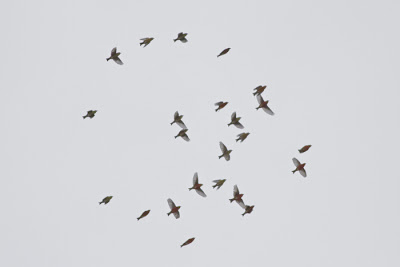 Look (and listen!) for Red Crossbills passing in busy, tight flocks overhead. In flight they show well-forked tail tips and have a rather heavy-headed, full chested shape [photo by Sam Galick]. 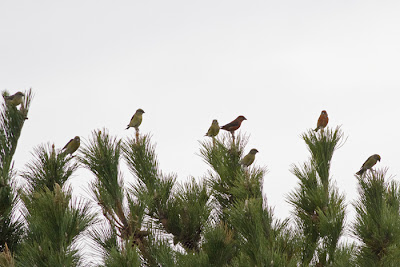 Red Crossbills lined up on the tree tops at Cape May Point [photo by Sam Galick].

As a latest update to crossbill movements at Cape May, listening for these birds is becoming more interesting this week as the last few days has seen the appearance of type 2 and type 10 birds among the type 3s. Many thanks to Michael O'Brien for sharing recordings made of these birds - and for a crazy recording that included all three types calling at once!!!
Posted by Mike Crewe at 12:47 PM