Western Grebe - and now Tanager too!

On January 25th this year, while waiting for Warren Cairo and I to stop waffling on about a dead Scots Pine we were looking at, Will Kerling casually looked at the same tree and found a Western Tanager in it; yesterday, while cycling through Cape May Court House, Will again glanced at a nearby tree and again found a Western Tanager! Great going Will! The bird - a nice shiny male - was in trees right on the intersection of W. Hand Avenue and Dias Creek Road and was seen again this morning so may well still be in the area. If you go looking for this bird, be aware that there is no parking in the immediate area and this is a very busy intersection. 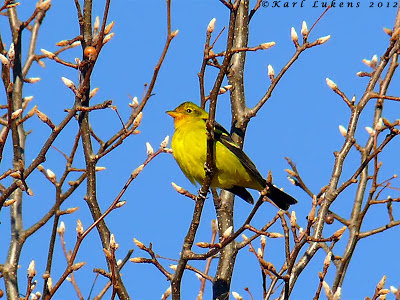 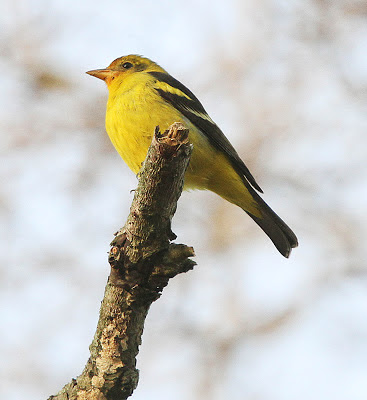 Male Western Tanager at Cape May Court House. Note the reddish tinge to the face and the bold, double wingbar [photo by Dale Gerhard]

While on all things Western, good news is that the Western Grebe is still hanging out in the harbor, right off the Nature Center of Cape May along Delaware Avenue. Bird activity remains good down at the point, with another run of American Goldfinches accompanied by a few Pine Siskins and Purple Finches, while Red Crossbills seem to be still moving daily. Two female Redheads are frequenting Bunker Pond, while up at Cox Hall Creek WMA, a Red-headed Woodpecker, Nashville Warbler and at least two Orange-crowned Warblers have been noted - one of the latter has also been in the state park. The last week or so has produced a small run of Baltimore Orioles, a species that has a habit of turning up around now after a bit of an absence in November. A number of these have been at backyard feeders at various locations around both Cape May and other South Jersey counties - so keep an eye out for a bright orange apparition at your feeder! 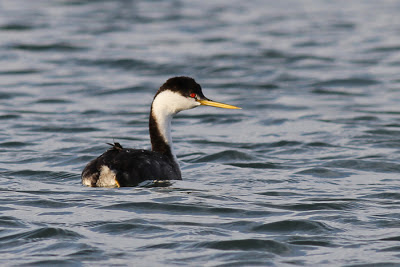 The Western Grebe is still putting on a good show in Cape May Harbor - let's hope it stays for our Kick off your Year List walk on January 1st [photo by Mike Crewe].

Meanwhile, Avalon Seawatch is producing some interesting late-season birds. A male Harlequin Duck flew through on 3rd, a Common Tern was noted on 5th and one or two Razorbills have been putting in an appearance, including four today. Poverty Beach has recently been holding a small group of Common Eiders and one or two Great Cormorants. Though this location is out of bounds as it is within the Coastguard Unit property, it can be checked by looking north from the beach end of Wilmington Avenue in East Cape May. Finally, Clay Sutton put some time in at the point today and notched up the 20th Golden Eagle of the season which quickly set its sights on Delaware. It was a pretty good day for raptors today, with Clay noting 5 immature Bald Eagles (plus two adult Balds, presumed local), 15 Red-tailed Hawks and 8 Red-shouldered Hawks.
Posted by Mike Crewe at 5:09 PM