keekeekerr down; some bird news

Sometime between yesterday morning and this morning, the keekeekerr text-messaging bird-alert system for Cape May went down, as did the associated website. Unfortunately, Bob Fogg (who runs the system) is in Colombia and not expected back for a while. Should any additional news about keekeekerr pop up, we'll be sure to announce it.

We know keekeekerr worked yesterday morning, because Richard Crossley texted a message about the male Eurasian Wigeon that he found then on Lake Lily, Cape May Point. I went wandering around this morning looking for it, and finally found it on Lighthouse Pond, along with a male Blue-winged Teal. 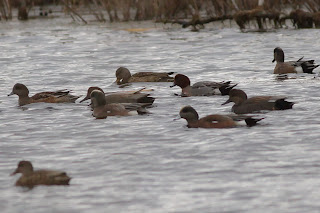 From the dune crossover at St. Peter's, I saw eiders (1 imm. male eider, 3 brown Commons) at the Coral Ave. jetty. I was at St. Pete's instead of Coral because of the heavy machinery associated with sand-replenishment operations being conducted at Coral at that time. From the St. Pete's crossover, I also counted five flocks of Red Crossbills, one of which obligingly landed in one of the Japanese Black Pines there. 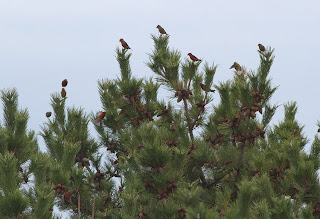 Finally, the Eurasian Collared-Doves that were such a staple of Cape May Point birding for the past 1.5 years have become invisible, apparently, with few seeing them in the past few weeks, even Glen Davis, who lives within a few houses of the local epicenter for the species. So, I was fairly surprised to see two of them flying over town shortly before I left St. Pete's this morning. 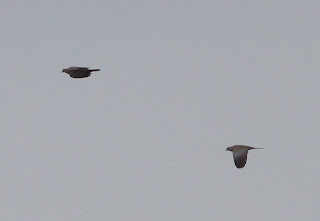