When it's a male Northern Shoveler!

A recent request that I made to some of Cape May's birding photographers turned up a few instructive photos on sexing (and ageing) Northern Shovelers, so I thought that I would share them here. In order to fully understand the gist of this essay, I have  provided an excerpt of a paper that I have just written on a related topic and to be published in the January 2013 issue of the journal of the Colorado Field Ornithologists, Colorado Birds, as an installment of the In The Scope column.


In this essay, I follow Pyle (2005, 2013) in considering the so-called eclipse plumage to be an alternate plumage and the bright plumage a basic plumage, and I utilize plumage and molt terms of Howell et al. (2003) and Pyle (2008).  Adult males of most ABA-area dabbling-duck species initiate molt out of basic plumage (termed “breeding plumage” by many) in late spring or early summer (about the time that females are on nests) into a more cryptic plumage for the period in which they replace their flight feathers and become flightless.  Many males move to particularly favored molting grounds, which may be close to the individuals’ breeding sites or quite distant.  There, they replace their bright basic plumage with a cryptic alternate plumage and then instigate wing molt.  When that flight-feather aspect of the prebasic molt nears completion, most species’ males then initiate the prebasic body molt and, essentially, complete it prior to fall migration.
Northern Shoveler (as do Blue-winged and Cinnamon teal) modifies this general dabbling-duck strategy by delaying the onset and, particularly, the completion of the body-plumage aspect of this molt.  The speed at which this species attains basic plumage is very slow, such that it can be initiated on the molting/breeding grounds, continued on the winter grounds, and completed on spring migration or, even, on the breeding grounds.  Pyle (2008) notes the duration of this molt in adult male Northern Shovelers as July through March!  However, molt speed is also individually variable, and as early as December, one can see at the same place and time adult male Northern Shovelers in nearly full alternate plumage (dull) alongside others in nearly full basic plumage (bright).
Juvenile males attain flight in a very female-like plumage and conduct one or two preformative molts before attaining male-like plumage in their first spring (Pyle 2008).  In Northern Shoveler, the first of two preformative molts is often (usually?) quite limited, while the second is significant, replacing most or all of the body plumage, but few, if any, flight feathers.  During this time, their bills transition from the dull “slaty-orange” (Pyle 2008), olive-tinged orange, or orange-tinged olive (pers. obs.) to the black typical of older males.  Juvenile males may not complete this molt until sometime in April.

[Click on image(s) to see larger version(s).]
[Female and adult male Northern Shovelers; note the bright yellow eye of the male (the darker eye of the female is suggested in this picture, but shadowed) and the differences in tertial shape, color, and pattern between the sexes. Photograph by Don Freiday Lake Champlain, Villas, Cape May Co., NJ; 26 February 2012] 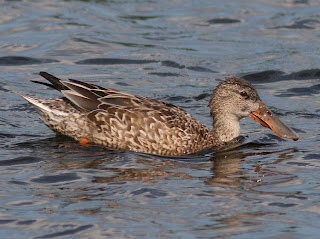 [This Northern Shoveler has the brown eye and extensively orange bill typical of females of the species. It also sports tertials (dabbling ducks have four or five of them) with the typical female pattern: a wide, pale fringe encircling the dusky to brown center. Eye color is variable in females, ranging from dark brown or dark brownish-olive in juveniles to nearly amber in a small percentage of adults (perhaps older birds?). This bird's blackish primaries (rather than brown) tells us that this is an adult. Photograph by Michael O'Brien, Cape May Point, Cape May Co., NJ; 22 January 2008] 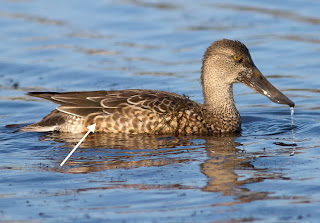 [On this Northern Shoveler, note the stronger face-crown contrast than that in the above picture, a feature suggestive of a male. Note also that the eye is quite yellow with an olive wash and that the bill is quite dark, both features of males. Because adult males have clear, bright yellow eyes, we can be certain that this is not an adult male. However, the dark feathering around the gape and the new sooty uppertail coverts confirm this bird as a male, thus it must be an immature male. This bird retains its juvenal, female-like tertials, but has replaced its juvenal long side feathers (which are pointed and have obvious pale internal markings) with its first set of formative-plumage feathers, which are round-tipped and lack obvious internal markings (see arrow). Photograph by Scott Whittle, Cape May Point State Park, 1 November 2011] 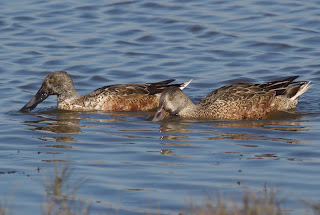 [This picture of two immature males -- note olive-washed yellow eyes, dark tertials with whitish shaft streak, rufous in sides, and white on upper sides of left bird -- illustrates another feature of male Northern Shovelers in plumages other than basic. That feature is the white loral crescent of greater or lesser extent, which can fool birders into considering Blue-winged Teal as an identification. However, Blue-winged Teal never have pale eyes nor such white tails, to say little of the gigantic bills that these birds sport. Photograph by Tony Leukering, Brazoria National Wildlife Refuge, Brazoria County, Texas; 18 November 2012] 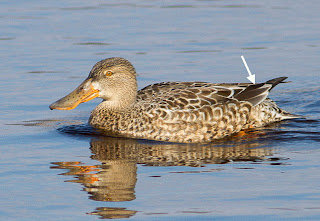 [We have an excellent clue in the eye color that we might want to study this one, because females only rarely have eyes this pale. We cannot see the uppertail coverts all that well, but there are a few feathers that appear quite dark and might suggest the sex as male. However, they have pale fringes, a feature not typical of males. Looking at the tertials, we should notice that the one indicated by the arrow is quite male-like, being blackish with a whitish shaft streak, rather than the color and pattern of the other tertials. We might then suspect that it is a young male only just beginning the molt that will make that self-evident. However, this bird's primaries are quite black, a feature strongly suggesting that this is an adult. This bird, then, must be a female, as adult male Northern Shovelers always have male-like tertials. Additionally, adult males would show much more obvious male plumage at the late date at which this picture was taken. This bird nicely illustrates another monkey wrench that ducks throw us: The tendency of older females with declining estrogen levels to produce some male-like plumage features. With that bit of information, one might want to take a closer look at the above female and note the multiple tertials that are fairly male-like. While the upper female has very dark eyes, this bird's eye color is quite pale, which may be another indicator that this is an older bird. Photograph by Scott Whittle, Cape May Point State Park, Cape May Co., NJ; 31 Dec 2011.] 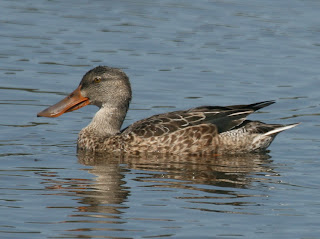 [This picture is, perhaps, the trickiest of the lot that I was sent and illustrates how difficult sexing brown Northern Shovelers can be from July through February. Though this Northern Shoveler sports an orange, female-like bill, the bird's paler eye suggests that we might want to look at it a bit more closely. In fact, looking at the back end, the bird has replaced some uppertail coverts with sooty feathers, suggesting that it might be a male. We can also see that the bird's tertials are wide and dark, and have a distinct whitish shaft streak rather than whitish or buff fringing. However, tertials are not like those of an adult male, but the primaries are blackish. Additionally, the eye has a distinct brown aspect, something that is rare in males. This,then, is another (presumed) older female. Photograph by Mike Crewe, Cape May Point State Park, 19 September 2010]

Thanks to Peter Pyle for reviewing pictures and for discussion about ageing and sexing Northern Shovelers.

Pyle, P. 2013. Molt Homologies in Ducks and Other Birds: A Response to Hawkins (2011) and Further Thoughts on Molt Terminology in Ducks. Waterbirds in press.
Posted by Tony Leukering at 11:59 AM