Another memorable hawkwatch draws to a close

Tomorrow will be a good day to pay a visit to the Hawkwatch Platform, since it marks the final day of this year's count. It has been another great year, with a fine mix of dull days and up days; days of "so where are they all?" and days of "How am I supposed to count all of these!!". A huge vote of thanks goes out to Tom Reed, this year's stalwart counter on the platform, and to Vince Elia and Pete Dunne who stood in on Tom's days off - as well as Alyssia Church who covered for Tom during those regular strolls to the other side of the parking lot!

It probably won't be a big raptor day tomorrow, but tomorrow will be about the people, not the birds - and who knows, maybe one of those goshawks will put in an appearance. 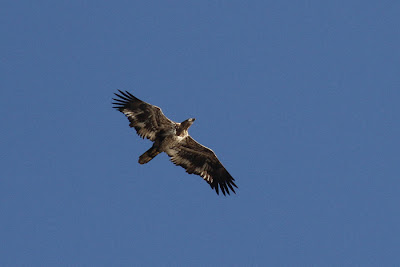 This remarkably white and blotchy-looking Bald Eagle cruised quietly over the Hawkwatch Platform early afternoon today and headed out over the bay, ensuring it got itself on the tally list [photo by Mike Crewe]. 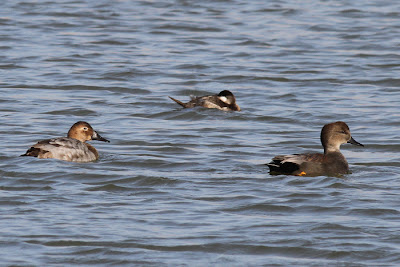 A really good mix of ducks can currently be seen around the Cape May Point ponds at the moment. Glen Davis found this female Canvasback (left) with the Ruddy Duck flock on the easternmost Plover Pond, between the state park and The Meadows today [photo by Mike Crewe].

Both White-winged and Red Crossbills continued to pass overhead at Cape May Point in small groups this morning and one or two Common Redpolls were noted, the largest flock being of 11 birds which Tom Reed reported from the Hawkwatch. A female Common Merganser flew round the point early this morning, a Black-and-white Warbler was a surprise find at the Hawkwatch Platform and Tom Magarian reported a Razorbill at the Avalon Seawatch, which plopped down somewhere near the 8th Street jetty.
Posted by Mike Crewe at 4:21 PM