Photographs of interesting birds, or photos of birds doing interesting things, are always a welcome addition to our blog, especially those taken in our South Jersey region. Here's one or two to highlight the diversity of birds still to be found here as we start to wind down the fall migration period (though it ain't over yet!). 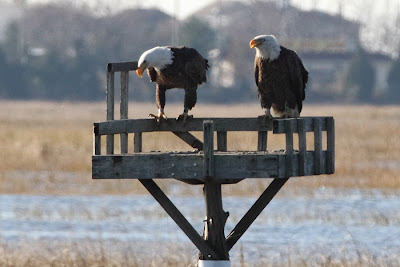 As the season's migrant Bald Eagles begin to disappear into the distance, we can start to assess how many we are going to have wintering with us. Most, if not all, of our local breeding pairs will stay in territory throughout the winter and some will have to put up with an influx of winterers from further north, driven out by harsher weather conditions than ours. This pair of Bald Eagles are currently staking their claim to a nesting platform in the backbays near Linwood, just over the border in Atlantic County (photo by E J Nistico). 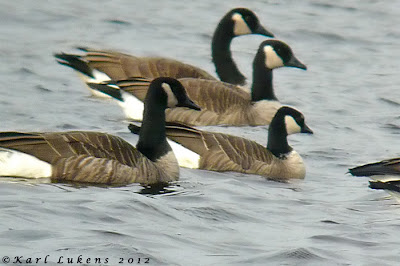 Whilst carving up Canada Goose into two separate species was easy to do on paper, field birders are sometimes left scratching their heads over the identity of apparently intermediate birds. However, this Cackling Goose (the small one in the middle) has been hanging around Cape May Point for a while now and offers no real confusion. Cackling Geese that are likely to turn up at Cape May are of the so-called Richardson's form (subspecies hutchinsii) which are a little larger and paler-breasted than the smaller Alaskan forms and probably overlap in size with Canada Geese of the form parvipes - which could just as easily reach our region [photo by Karl Lukens]. 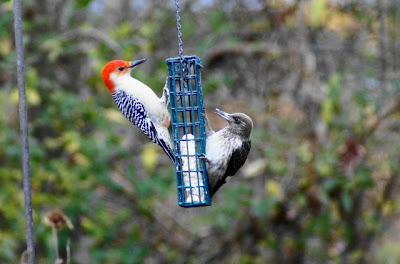 Keeping an eye on the backyard feeders so often pays dividends and this Red-headed Woodpecker has been visiting a yard in Salem County recently. Seen here with a Red-bellied Woodpecker, don't get confused when I tell you the red-head is the one on the right!! Juvenile Red-headed Woodpeckers have gray heads in their first year and are best told by the large white wing patch which is easily seen in flight [photo by Jeff White]. 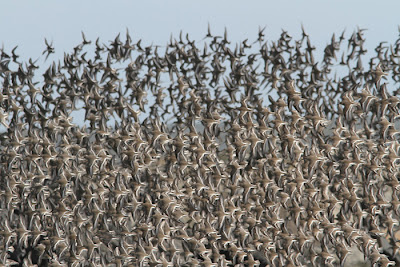 I must admit, I haven't yet had time myself to get over to the Avalon Seawatch since Hurricane Sandy came through, but I hear that the profile of the jetty at the mouth of the inlet there has changed and it will be interesting to see what effect it has on food availability for wintering birds. At present though, the birds seem to be enjoying the changes, as witnessed by this photo which shows just some of the thousands of Dunlin currently using Avalon beachfront [photo by Beth Polvino]. 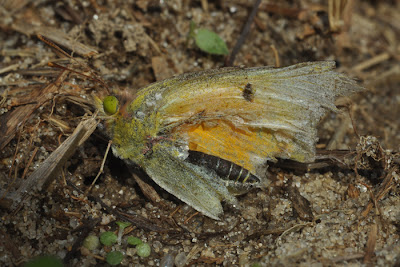 Intrepid as ever in pursuit of things with four wings, Will Kerling was out immediately after Hurricane Sandy and was pleased to find life was carrying on - just! This incredibly storm-beaten Orange Sulphur was still struggling on in its pursuit of food, but certainly seems to have taken a remarkable battering. Since Sandy passed, butterflies have been hard to come by, but small numbers of Red Admirals and even a few Monarchs continue to head southward and a few Question-marks continue to delay hibernation for as long as possible [photo by Will Kerling].
Posted by Mike Crewe at 10:48 AM