It's not often that you get a three-dove day at Cape May - in fact a four dove day if you count those pigeons that hang out at the bunker in the state park! But today was just such a day, and all three species could be seen from one spot if you positioned yourself right at the intersection of Whilldin and Lincoln Avenues at Cape May Point this morning. A White-winged Dove paraded itself nicely on overhead wires on Whilldin, close to Yale Avenue, while two Eurasian Collared Doves were viewable at the same time just two phone poles down Lincoln Avenue. Actually, it was not a good day for the Eurasian Collared Doves today as one ended up as a meal for an adult Cooper's Hawk this morning. This seems to leave us with a juvenile and a single adult so it will be interesting to see what happens. Bird movements along the dune were quieter this morning than has been the case over the past few days, though a couple of obliging Cave Swallows fed nearby, a Snow Bunting called frequently for a while - though I failed to find it - and there was a good movement of American Pipits. A few White-winged Crossbills were still around with at least one male dropping into the pines between St Mary's and St Peter's and a Pine Warbler added to the ever-growing list of late warblers being found this month. Today's haul also included an Ovenbird at Hidden Valley and a Cape May Warbler in the dunes at the point. A female Evening Grosbeak flying over the White-winged Dove this morning did set us pondering on how often you get a chance to see those two species at the same time!! 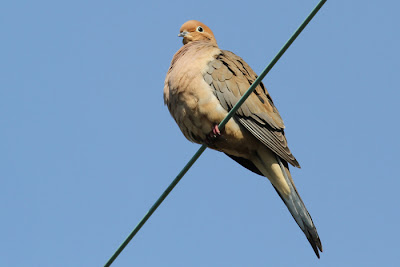 The local Mourning Doves at Cape May Point have no doubt seen it all before - birdwatchers only showing an interest in them when other doves show up in town! Note the typically rather long and pointed tail of this individual [photo by Mike Crewe]. 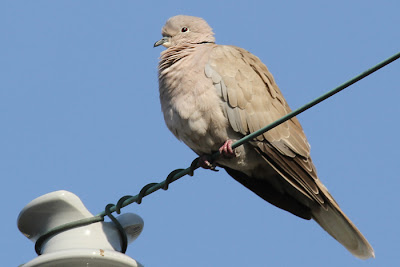 Dove number two - the Eurasian Collared Doves at Cape May Point turned up in July 2011 and remain faithful to a block either way from the intersection of Whilldin and Lincoln Avenues. Note here the relatively shorter tail compared with Mourning Dove [photo by Mike Crewe]. 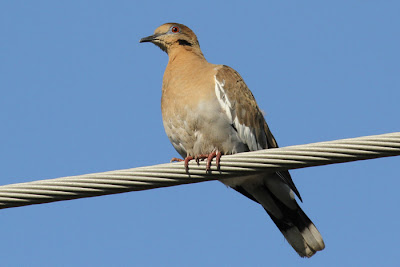 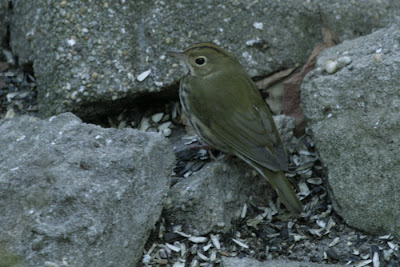 Feeders continue to produce surprises at Cape May - this Ovenbird was first spotted by Todd Klein at the Northwood Center feeders yesterday [photo by Mike Crewe]. 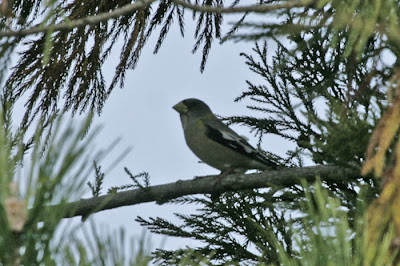 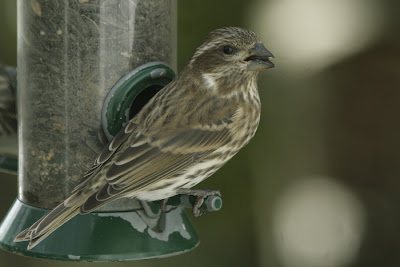 There is always something new to be learnt from birds. The big influx of Purple Finches has set me pondering on how you age and sex non-breeding-plumaged males in this species and I have so far discovered that none of the field guides I have tackles the problem. I feel another blog post coming on... [photo by Mike Crewe].
Posted by Mike Crewe at 6:23 PM