Pelicans and other things...

Tom Reed picked a bad day to swap hawk-counting with Pete Dunne at the Hawkwatch Platform today, as first a White Ibis, then later a flock of 10 American White Pelicans visited the point. The ibis was reported by Scott Whittle who was up on the dune crossover at Coral Avenue, then seen by Glen Davis as it headed seemingly in the direction of the state park with a Great Egret. Despite further searching, it was not re-found later. It is presumed - for now at least - that this is the bird that has been up at Reeds Beach Road recently. The party of 10 pelicans follows on from a report of nine at Brigantine on November 25th and five near there the next day. Today's group appeared from the east, heading toward the point but a little offshore, and made slow enough progress for me to get there and see them before they gradually made their way out over the bay. We actually lost them from view behind St Mary's so we were not sure whether they continued to Delaware or turned back up the bay - keep an eye out!

Elsewhere, the Avalon Seawatch continues to enjoy some good spells with a late Black Skimmer on 26th, a fabulous count of 10,541 Red-throated Loons on 26th and a group of four birds seen distantly today that were probably murres - worth looking for tomorrow. 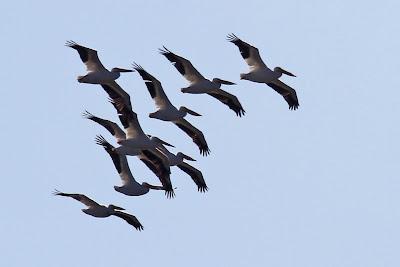 Nine of the 10 American White Pelicans that cruised past Cape May Point today - the other one was dragging his heels behind them! November appears to be becoming the time to see this species at Cape May, although they tend not to hang around [photo by Mike Crewe].
Posted by Mike Crewe at 5:28 PM