Northern Goshawk is an enigmatic bird. At one and the same time, it manages to be both the most over-recorded and most under-recorded of raptors - over-recorded, because there is a strong desire to see this awesome bird, which sometimes clouds judgement of distant or brief views; under-recorded, because this mighty bird has a remarkable knack for staying hidden. It's a bird of the thick, dark, boreal forests and seldom strays into the open, except for a brief spell of display flights early in the breeding season.

But juvenile Northern Goshawks know none of this and, occasionally, a youngster on its first winter wanderings will throw away the rule book. This has certainly been the case this fall at Cape May Point with two different young Northern Goshawks putting on some quite dramatic shows, as illustrated in the pictures that follow. Most dramatic, have been a growing number of casual reports of dead Cooper's Hawks found around the state park. The culprit was suspected, and finally caught on camera - a young goshawk. It may at first seem strange for a bird that would normally be happy feeding on ducks, squirrels, starlings and the like, to bother with the extra potential danger of hunting other raptors, but this is very typical of Northern Goshawks. In many parts of the world, this species is a significant predator of other raptors, even including birds as big as Honey Buzzards in Europe, making it a truly amazing bird to see. 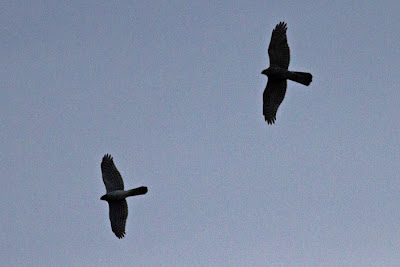 At times, Northern Goshawk can be mistaken for Cooper's Hawk, especially during brief or distant views. Though sizes of the two don't quite overlap, variation in size within both species makes judging the size of a lone bird tricky. Here the Cooper's is to the left, Northern Goshawk on the right. Note the latter's longer wing with narrower 'hand' and the thicker-set base to the tail [photo by Tom Reed]. 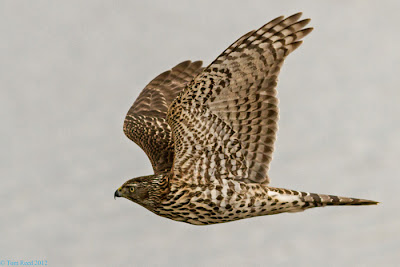 The view we all long for! Just a couple of times in a lifetime we might get a view like this - a juvenile Northern Goshawk powering right past the Hawkwatch Platform. Here note especially the narrow pale lines bordering the dark bands on the tail, the full, deep-chested look and the relatively clean, white supercilium over the eye [photo by Tom Reed]. 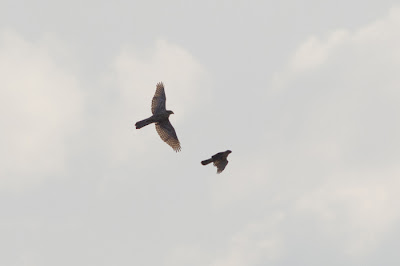 Very few of us get to see a Northern Goshawk make a kill (I'm still waiting!) and it really is something quite dramatic. Here the goshawk approaches a panicking Cooper's Hawk from behind [photo by Sam Galick]. 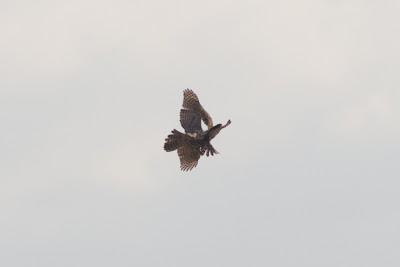 The point of impact happened over Bunker Pond, right in front of the Hawkwatch Platform... [photo by Sam Galick]. 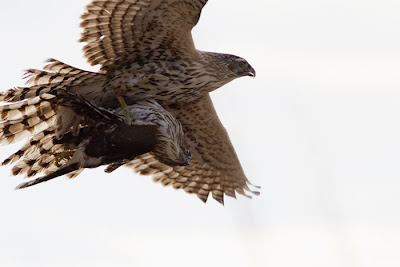 ... and resulted in a sight seldom seen, though well-known to occur - a Northern Goshawk takes a Cooper's Hawk [photo by San Galick]. 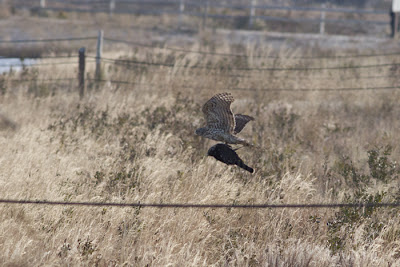 When the hunter becomes the hunted, the world seems turned on its head. But nature is red in tooth and claw and it truly is the survival of the fittest out there [photo by Sam Galick].
Posted by Mike Crewe at 4:45 PM