The very best of days...

It is just possible that Cape May's birding community might get some sleep at some point over the next few days, for there has certainly been very little since Hurricane Sandy bid us farewell and November showed up. Why? Well, simply because the birding has been so amazingly good! No-one has wanted to miss a second in the field - and those who did, whether through tardiness or due to other committments - had to take it on the chin and miss a bird or two.

It is hard to be absolutely clear what has happened this past few days, but it seems to me to be a combination of two things; firstly, a massive crop failure of a number of boreal tree species, resulting in an unprecedented (at least in recent years) southward movement of more northerly bird species (particularly nuthatches and finches). Secondly, this movement was interrupted by weather patterns associated with Hurricane Sandy and a more northerly low which joined forces to create the huge storm that we have all been following in the media. Post Sandy, southward migration through Cape May Point has been spectacular and this is likely due to the back log of birds starting to move again now that the weather has improved - and our local situation has been helped by the NW windflow that has kept birds coming this way.

So what has this meant for Cape May? Well, unlike the fabulous fall of sparrows that took place in late October 2010, early November 2012 has seen birders keeping an eye on the sky, as it has been the onward movement of day migrants that has been so impressive. American Robins, Cedar Waxwings, blackbirds and finches have formed the bulk of activity, while raptors have also come into the picture over the last 48 hours. I managed to extract some data from eBird on some of the more noticeable bird species involved in recent movements, so here's some reported figures for early November (all figures are for counts of southbound birds made at regular watchpoints at the dune-crossovers at the south end of Cape May Point):

Note that I have here listed only the species of greatest interest (many other species were involved in smaller numbers) and then only the higher counts; smaller numbers of all species were noted on other dates too. I have included the goldfinch counts for comparison with the siskin numbers as normally one would expect goldfinches to far outnumber siskins here.

Of particular interest here are the White-winged Crossbill numbers which far exceed any numbers ever recorded here before, while Evening Grosbeaks are being reported in small numbers daily around the county are represent the first reports here since 1999.

While eyes are turned to the skies, we can't fail but notice the impressive raptor migration which has taken place this past couple of days - and continues as I write. Keep an eye for updated figures on our Seasonal Research page. As of now, data is available up to November 4th, showing an impressive movement of 14 Golden Eagles, 233 Red-shouldered Hawks, 428 Red-tailed Hawks, nine Northern Goshawks, 60 Northern Harriers and 919 Sharp-shinned Hawks. The Golden Eagle count ties for highest day count while the Red-shoulder count is a new highest day count (PS - once data for 5th is up, you will see that the Red-shoulder record only lasted a day!).

Also of interest - if you can take any more! - nine species of warbler have so far been noted during November, up to three Eurasian Wigeon have been noted on Lighthouse Pond, a scattering of Cave Swallows continues to be reported and a Swainson's Hawk continues to be reported, currently at the Rea Farm. After all that wordy stuff, here's some pictures from the last few days: 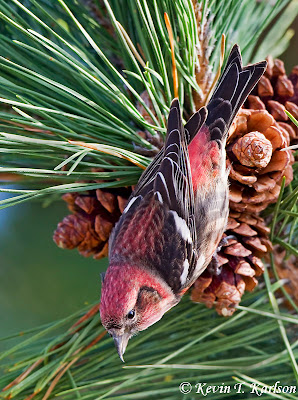 White-winged Crossbills have certainly been one of the star attractions this week. After several days of southward movement, a few finally began to settle briefly in the Japanese Black Pines around Cape May Point, including this superb, raspberry-pink male [photo by Kevin Karlson]. 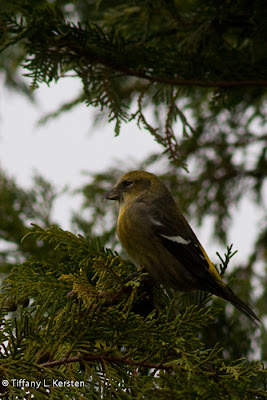 Female and juvenile White-winged Crossbills are less gaudy and easily overlooked amongst green foliage. This individual was lurking in the trees at the point on the 3rd [photo by Tiffany Kersten]. 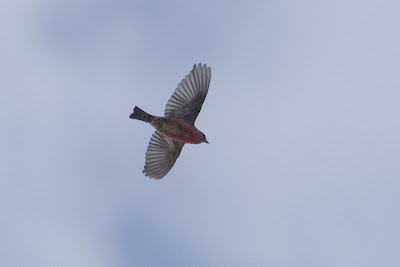 From below, the wingbars of White-winged Crossbills are not noticeable, but note this male's pinkish underparts, relatively small bill (for a crossbill) and dark underwing [photo by Sam Galick]. 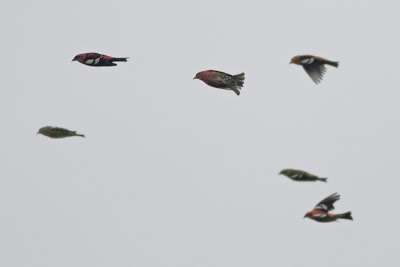 Cape May birders have waited a long time for this - White-winged Crossbills flocking past Cape May Point! [Photo by Sam Galick] 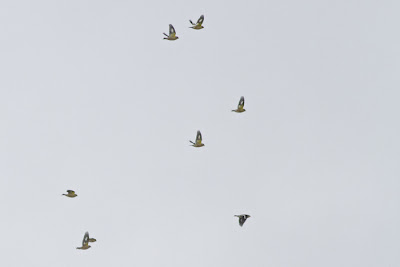 Along with the crossbills came perhaps even more spectacular birds - Evening Grosbeaks. This group of eight was part of a total of 16 birds logged passing the point on November 3rd [photo by Sam Galick]. 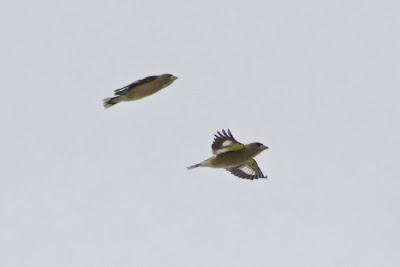 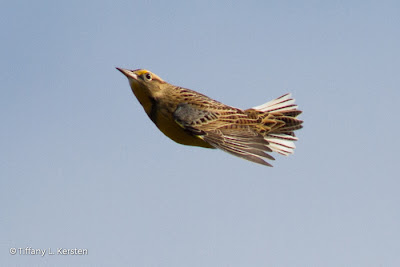 While counting the big numbers of commoner species, there is always those little additionals to keep an eye out for. This Eastern Meadowlark came and gave us all a close look on November 2nd [photo by Tiffany Kersten]. 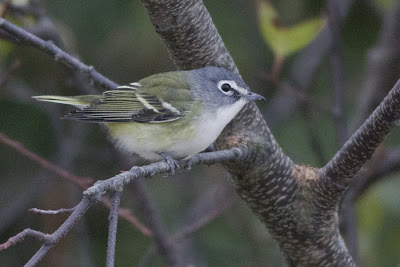 While birds stream overhead, you have to keep an eye on the bushes too. This Blue-headed Vireo paused in a Black Cherry right beside us on the 3rd [photo by Sam Galick]. 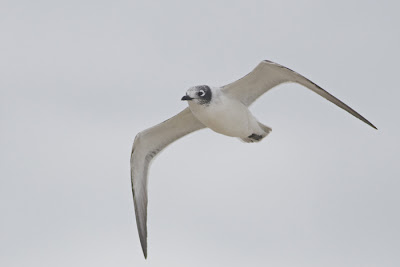 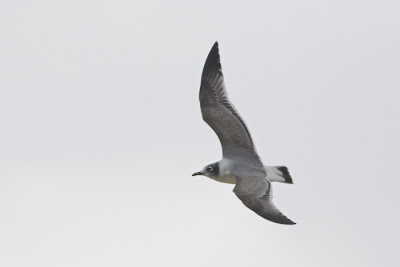 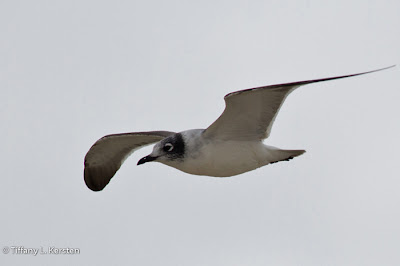 Also passing the group counting migrants on November 3rd, this Franklin's Gull was first reported by Tom Reed as it flew past the Hawkwatch Platform and was subsequently seen from other locations as it headed around the point [top two photos by Sam Galick, bottom by Tiffany Kersten]. 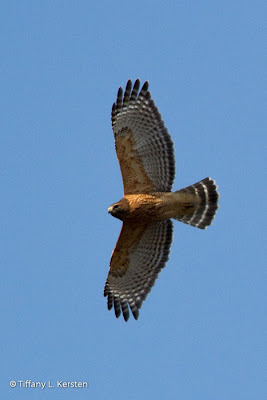 A new day record was twice set this week for Red-shouldered Hawk and movements included some fabulous adults, such as this one [photo by Tiffany Kersten]. 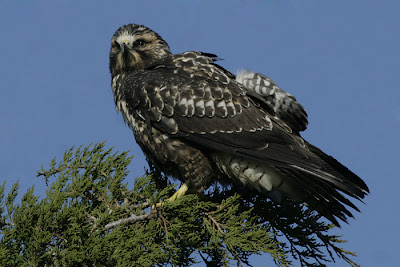 Always much sought-after on Fall, Swainson's Hawks are pretty much annual at Cape May, given the right weather conditions to drift them across from the west. This bird appeared over Cape May Point on November 4th, was trapped by the hawk-banding team later that day and continues at the Rea Farm today [photo by Mike Crewe]. 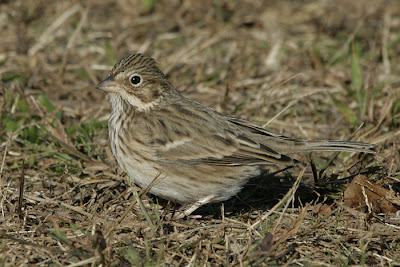 Though sparrows have not featured so much in our blog posts lately, the fields and hedges south of Cape May Canal are worth searching as there are plenty around. In particular, it has been a good Fall so far for Vesper Sparrows, such as this one which was by the Cape May lighthouse on the 5th. Note the overall pale coloration with lack of warm tones and the well-marked eyering [photo by Mike Crewe]. 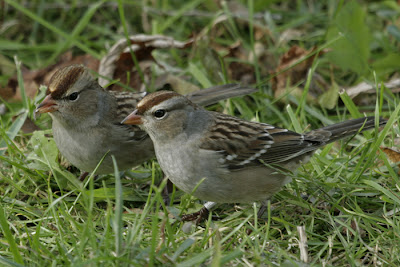 White-crowned Sparrows are showing up in good numbers at the moment - these were two of six at my feeders on the 5th. The front bird is of interest as it bears a band on its right leg and shows at least some characteristics of the more westerly form, known as Gambel's White-crowned Sparrow, though it may just be an intergrade between the two populations [photo by Mike Crewe]. 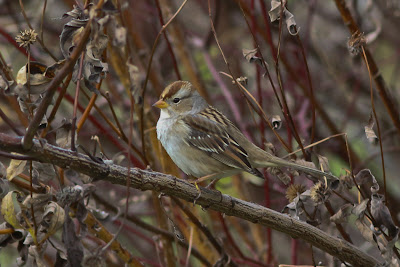 This bird was on Stevens Street on the 5th and is more obviously a Gambel's White-crowned Sparrow, showing the pale lores without a dark line from eye to bill, and a more yellowish tinge to its bill [photo by Michael O'Brien]. 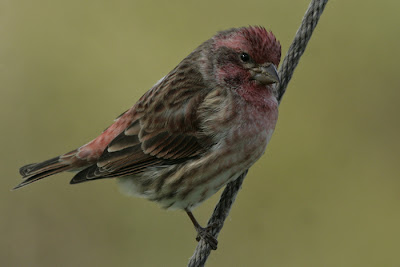 Purple Finches are perhaps the most regular of the northern finches to reach south into Cape May during fall/winter, but a good year such as this usually guarantees us a few more of the pink-tinged adult males - keep an eye out for them at your feeders [photo by Mike Crewe]. 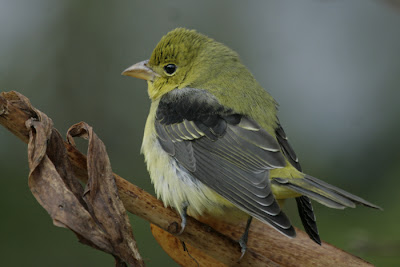 Feeder watching has its merits when looking for scarcer birds too - Scarlet Tanager is a common bird at Cape May but November records are always worth reporting, and worth checking for Western Tanager. On this first-winter male, note the contrast between the newly-molted black, inner greater coverts and the grayer, outer ones, which also have small yellowish tips. This bird was feeding on Siberian Crab Apples with American Robins on Harvard Avenue on November 3rd [Photo by Mike Crewe].
Posted by Mike Crewe at 11:09 AM