The days may be getting shorter, but Cape May continues to enjoy some great birding - though a bit of rainy weather slowed things for a while yesterday. Although the deluge of birds that poured through Cape May Point a short while ago has slowed to a trickle, there is nevertheless still a trickle. Just this morning, our final Wednesday morning walk of the season began with close-up views of a male Red Crossbill which called overhead then decided to plonk itself down in a pine tree right next to the parking lot and provide some great photo opportunities as well as awesome scope views! Such unplanned moments always stand out as highlights on any walk here. In addition to the crossbill, a large American Pipit movement was taking place, with Tom Reed having counted 325 from the Hawkwatch Platform before 11AM. Red-shouldered Hawks - including some colorful adults - still ply the skies over the point and a Golden Eagle put in an appearance today. Eastern Bluebirds are becoming very noticeable in the area right now - these are traditionally late migrants here - and American Goldfinches are slowly replacing Pine Siskins and Purple Finches at the feeders. 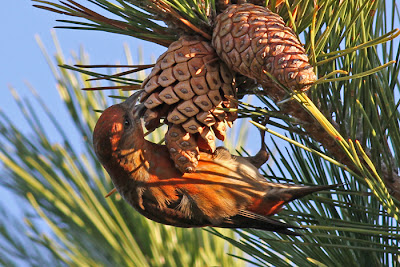 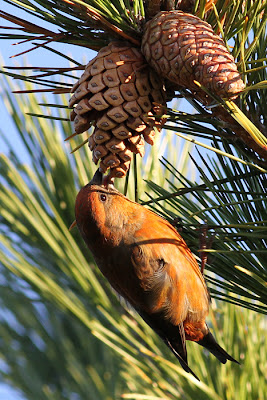 Male Red Crossbill at Cape May Point State Park today. Compare the two photos and look how the bird has opened up the tip of the cone in the bottom picture, compared with how it appeared in the top photograph, taken earlier [photos by Mike Crewe].

Cave Swallows are being seen regularly at several locations - most notably at the Hawkwatch and Avalon Seawatch locations. The latter location has also been producing some nice birds offshore with Red-necked Grebe and Razorbill both reported from there on 11th. The report of an Ovenbird at the Northwood Center was followed by sightings of other Ovenbirds at Hidden Valley and Cape May Point, and James Cremer reported a Rose-breasted Grosbeak at his feeder in Cape May on 14th. A Nashville Warbler was noted at the state park on 12th. 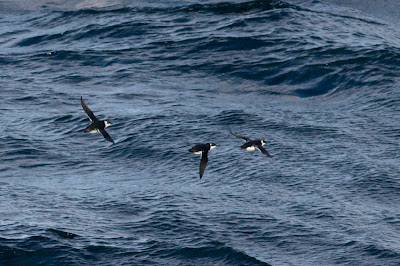 If you are planning to head to Avalon for some seawatching over the coming days, it is worth noting that some good birds seem to be lurking just out there near the horizon somewhere. Tom Johnson sent me this picture of three Dovekies, seen off our coast on Monday and in need of just a little bit of a blow to push them closer to us... [photo by Tom Johnson].

On 12th, Tom Reed and I decided that it really was high time that Cape May had another Northern Lapwing. We scoured as many areas of suitable habitat as we could think of, across the length and breadth of the county but, try as we might though, we couldn't turn one up. It was a fun opportunity to visit some out of the way places though, and we were surprised to turn up four Cattle Egrets - three in Eldora and one near the entrance to Cape May Airport. We also got lucky with flight views of an American Bittern from the causeway near Ocean City. 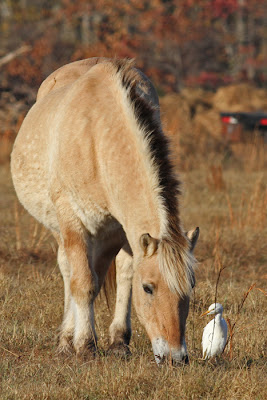 Cattle Egret gives a horse some food-finding tips at Eldora on 12th. Once a common summer visitor to the area, Cattle Egret numbers declined here from the 1980s onward, but recently have shown another upward trend. Even so, November records remain rare, and a total of four birds at three different locations on Monday was unexpected [photo by Mike Crewe]. 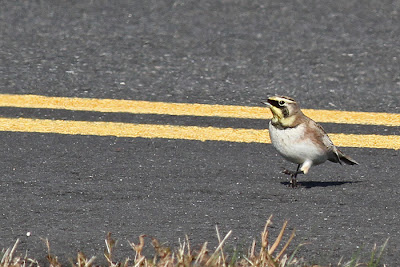 Cape May Airport is a regular location for Horned Larks where a small resident population can usually be found by scanning carefully through the fence from near the Flight Deck restaurant. One or two can usually be found, but on 12th, some 35 birds were visible in a sometimes quite noisy feeding flock [photo by Mike Crewe]. 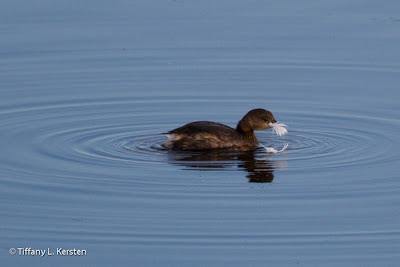 The eating of feathers by grebes is well-documented, but not easy to capture on camera. Tiffany Kersten sent me a series of photos of this Pied-billed Grebe eating what appear to be either gull or swan feathers. The full reason for this behavior is not clear, but it is thought that it perhaps aids the passing of fishbones through the bird's digestive tract, or even helps with reducing internal parasites.

Saturday and Monday walks continue through the month, so do come and enjoy November with us - our 'rarity' season, when so many good birds have turned up in the past!!
Posted by Mike Crewe at 4:55 PM