The fabulous year for crossbills and Cave Swallows continues, with many more reports over the last few days from Cape May Point and surrounding areas. In the past few days, Red Crossbills seem to have taken over from White-winged Crossbills in number, but the two species continue to show well and are most reliably being seen from the stands of Japanese Black Pine along the dunes, anywhere from Cape May Point State Park to Alexander Avenue. A little further afield came an interesting report of a male White-winged Crossbill which boarded the Cape May-Lewes Ferry on November 17th and was enjoyed by a number of birdwatchers using the ferry at the time.

Much work has been done on Red Crossbill populations in recent years - both in Europe and North America - and the situation remains complex and thought-provoking. It seems that there are a number of discreet populations of this species which can pretty reliably be identified by constant differences in their contact calls. With this in mind, Cape May birders are attempting to get recordings of vocalizations so that we may get an idea of which population 'our' birds belong to and, from that, perhaps an idea of where they have come from. So far, it is looking as though the present irruption involves so-called 'type 3' birds performing an extraordinary feat - they are arriving here from the pacific North-west!! Though the complexities of crossbill taxonomy may not be everyone's favorite thing (a breakfast bagel at the Sunset Grille sounds much better to me!), the fact that we are able to identify these different populations does mean that we can learn a lot more about these remarkable birds. We're all looking forward to seeing how this develops, and the amazing information database that is building up in eBird certainly offers an excellent resource for following what is happening with these birds. 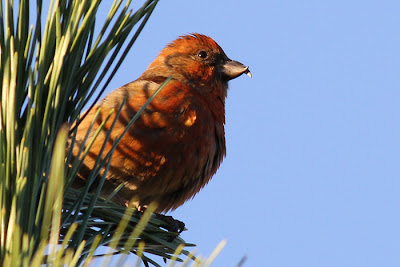 Male Red Crossbill at Cape May Point State Park. So-called 'type 3' or Western Hemlock Crossbill has a small bill compared with some other types of the same species and this is an adaptation to feeding on the small cones of hemlock trees. This makes it interesting seeing them coping with the relatively heavy cones and seeds of local pine trees [photo by Mike Crewe].

As has become expected during November in recent years, we are currently in the midst of a Cave Swallow invasion and this year is proving to be another impressive one, similar to what we experienced in 2010. Counts of up to 100 birds are coming in on a more or less daily basis, from sites along the tip of the peninsula such as the state park, the meadows, around Cape May Point itself and over Cape May City. A couple of days ago, Tom Reed and I enjoyed listening to the bubbly twitterings of these birds as they fed right over the Hawkwatch Platform. If you look at a distribution map of this species, you will see that it is 'supposed' to occur only in the extreme south-west of North America, but regular incursions of these birds at this time of year suggests that a new strategy has been adopted by this species. Most likely, birds push north at the end of the breeding season - perhaps up the Mississippi flyway - then drift eastward to the coast before returning south and west to their breeding areas. Such strategies allow birds to utilize reliable food sources that might otherwise not be available to them, at a time when feeding opportunities might be sparse 'back home'. Whatever is happening, it is certainly a good time to enjoy these chubby little birds. 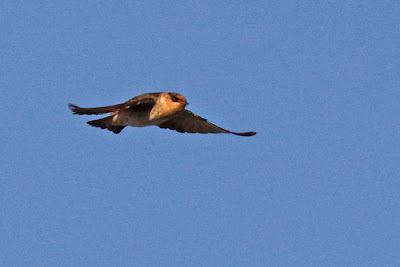